Austin Peay center Chris Horton (5) comes away with a rebound over Kansas forward Jamari Traylor (31) during the first half of a first-round NCAA Tournament game, Thursday, March 17, 2016 at Wells Fargo Arena in Des Moines, Iowa.

Des Moines, Iowa — Austin Peay hit 41 percent of its shots in a 105-79 loss to Kansas in the first round of the NCAA Tournament on Thursday at Wells Fargo Arena.

“It was terrible,” junior forward Landen Lucas said of the Jayhawks’ defense. “We let the officials bother us and let them get in our heads too much. We’ve got to change that going into the next game.” 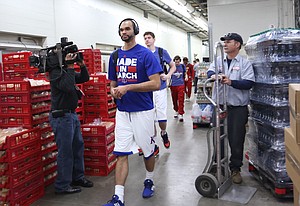 “I watched the first half in the hotel,” Kansas coach Bill Self said. “Colorado controlled the first half. Based on what our staff said, Connecticut players rose to the challenge, put a lot of pressure on Colorado after that. It was a great win for Connecticut. We know we have our hands full.”

Drake won, 95-59, and its players and cheerleaders posed with the Jayhawk band at center court after the game.

“How cool is that?” Drake women’s coach Jennie Baranczyk told ESPN.com. “They even learned our fight song. I’ll be cheering for Kansas men to win.”

Thank you @kubballband for stepping in for our band tonight! We 💙ed having you & appreciate you cheering us on!🎺💙🏀🎷 pic.twitter.com/abzWW2SICU

None by Drake W. Basketball

Self a finalist: KU coach Self is a finalist for Naismith coach of the year, the Atlanta Tipoff Club announced. Other finalists: Jay Wright of Villanova, Tom Crean of Indiana and Chris Mack of Xavier.

The winner will be announced on Sunday, April 3, at the Naismith Awards brunch at the NCAA Men’s Final Four in Houston. 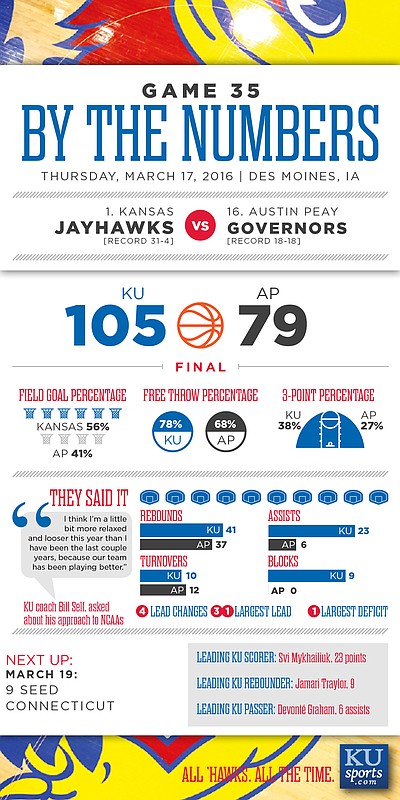 Great game Jayhawks!!!!! I've said this numerous times in the past weeks, KU is going to win it all. Rock Chalk!!!!

Too many points allowed. Check out the number of fouls on our starters versus Virginia. This was a sixteen seed. Will not work against Connecticut.

I hope that Frank Mason will show up against UCONN.

I hope he's healthy. Would have gladly lost conference tourney to let him heal.

Kudos to the band! During the years the Big VIII had a preseason tournament, a volunteer band from all the schools would assemble in Kansas City, and would play the fight song of each of the two schools on the court. I still hate Mizzou but sure enjoyed playing their fight song! None were more original nore more enjoyable to play however, than "I'm a Jayhawk."

Good karma move by the band.

NO tears for Kaleb Tarczewski. Could have won an NCAA title at KU but Arizona's record for underperforming in the NCAA make KU's record look golden.

Now it has become a legitimate question. What is wrong with the Big 12 in March Madness? Of the 7 teams who made the tournament, we are 3-3 with the Texas game in progress. The 3 losses have been to the likes of college basketball powerhouses Stephen F. Austin, Yale, and Butler. Northern Iowa is currently beating the Longhorns 14-13 with 10 minutes and change left in the first half. The losing teams from the Big 12 include what was considered late in the conference regular season "1st tier" West Virginia, "2nd tier" Baylor (who wan not statistically eliminated from winning a share of the conference title until relatively late in the season), and 3rd tier Texas Tech, whose coach had been hailed by his cohorts as Coach of the Year.

Kansas, Oklahoma, and Iowa State all performed as expected, but there is still enough evidence to reasonably suggest that the style or toughness of the Big 12 brand of basketball does not translate well when facing other conferences in the national tournament. I have wondered if there are reasons for this. I have hypothesized, for example, that Coastal players are generally better than midwesterners, and that they typically tend to go to either the schools more in line with their own geographic area, or Kentucky, or Arizona. I dont hang my hat on this because I have done neither research into where the Coastal kids go, nor the makeup of Kansas' own roster as well as other schools from the Big 12 and midwest.

Whatever the reasons are or arent, it is clear that Big 12 schools really have a lot of ground to make up to be good when facing other schools in the country. By the way, Northern Iowa is now ahead of Texas 27-15. What is going on, indeed!

I've been wondering the same thing. Are our officials not calling it as tight all year that the players are having a rough time adapting? I don't know how tough it is to adapt to the style of play being called if it is different than what you are used to but man. Our guards obviously had a tough time and fouled an awful lot. Texas is having a rough time as well. Not to mention WV couldn't play their normal mugging style. WV looked really frustrated and it showed with some of their cheap shots that turned into technicals. Something isn't right though.

If I had to pick between player talent and style of play I'd pick the latter as the culprit. Seems more plausible and I don’t think the discrepancy in talent is great enough to explain the lack of production in the post season. Some of it can be explained by the nature of the tournament where so many teams that go unnoticed during the regular season are suddenly under the spotlight and a single win in the tournament makes their season.

You could ask the same question of MSU. They were blindsided! Not unhappy about it, but there is a reason it's called "March Madness!"

And Texas falls. The MVC is 2-0 while the mighty Big 12 is 3-4. The reason why this conference has not performed well is a legit question but the Pac 12 needs to ask the same of themselves. They are 2-5 and without looking up the records I'm pretty sure they have performed worse than the Big 12 in recent years.