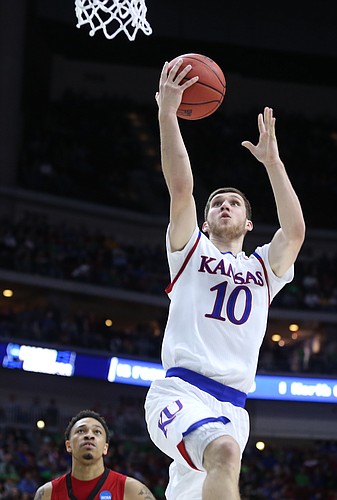 Kansas guard Sviatoslav Mykhailiuk (10) gets to the bucket past Austin Peay guard Khalil Davis during the second half, Thursday, March 17, 2016 at Wells Fargo Arena in Des Moines, Iowa. by Nick Krug

1 - Svi Mykhailiuk: Caught fire catching-and-shooting from deep in the corner, dribbled into buckets, got up high on a slam and generally showed off the tools that NBA scouts find intriguing on his way to career-high 23 points (9 of 11 field goals, 4 of 5 threes). Smooth operator.

3 - Perry Ellis: I think I saw him make a spin move into a jump hook on the right block, but I’m not sure because I blinked. What’s a defender to do? He has such a strong game, beginning with how swiftly he races down the court. Made 8 of 12 field goals and scored 21 points.

4 - Jamari Traylor: Hustled all-out to dominate the offensive boards in the first half, demoralizing the Governors. Scoreless, he played big with nine rebounds and two blocked shots in 18 minutes.

5 - Wayne Selden Jr.: Hit his first NCAA Tournament three-pointer on the game’s first possession. Finished with 14 points in 19 minutes. Made more field goals (5 of 10) in this one than previous four tourney games (4 of 16).

6 - Devonté Graham: Scoreless, he was more concerned with setting up teammates, which he did with six assists. Did not turn it over.

7 - Frank Mason III: Spring didn’t quite seem to be 100 percent there. Hip? Foot? Or maybe the competitive fires weren’t stoked because they didn’t need to be for Kansas to cruise to easy victory. Had nine points, four assists and one turnover.

8 - Cheick Diallo: Didn’t get in until late in the game and was extremely active, producing nine points, four rebounds and a blocked shot.

9 - Lagerald Vick: Perfect shooting day from inside the arc, outside it and at the free-throw line on way to seven points in 10 minutes. Also mixed in two assists, a steal and a blocked shot.

10 - Carlton Bragg: Four points, three rebounds, an assist and a steal. And, but of course, three personal fouls in nine minutes.

11 - Brannen Greene: Playing through a sore back, Greene hustled his way to four assists and three steals. Feed to Diallo for a dunk was a beauty.

12 - Hunter Mickelson: Played five minutes, committed four fouls and made 1 of 5 shots. Nobody could accuse him of spectating on the floor.

Mason's hurting again. We all know how Mason plays and this is the version we saw for a half dozen games post OU-AFH when he was hurt. I hope the trainers get him fired up fast!

It seems to be a different player every game.