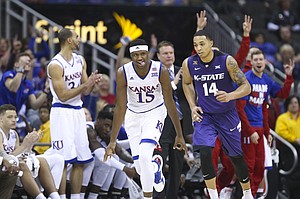 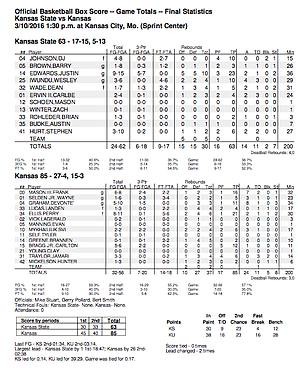 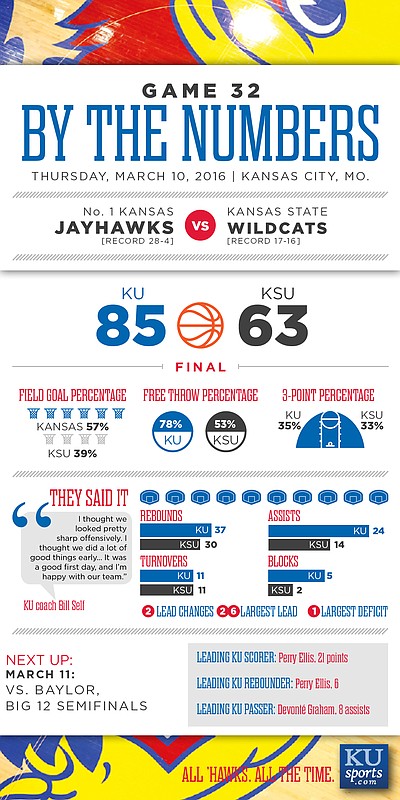 From my vantage point in a Sprint Center luxury suite, I was shocked when Bragg attempted those threes, and even more shocked (pleasantly, that is) when they went in. Despite fouling out and not rebounding, I would say Bragg had a good game today. And now that we know he can hit some threes, I'd like to see him try some more.

Thanks for describing the scene Bryce.

Perry has shown us how valuable adding the 3 ball to his game from the 4 spot in this offense can be. Bragg, who most assume will take Perry's minutes next year gave me some hope that he can continue the trend of our 4 man being a threat from beyond the arc.

A little advice to Bragg - keep your highs low and your lows high. Gonna need some maturity from you and Diallo next season. Stay focused and confident.

I really hope Selden can get it turned on here fairly soon. Although the outcome of this tournament won't affect anything for KU, I'd feel better heading into the dance knowing Wayne's shot was falling. It kind of reminds me of the slump that McLemore was in back in 2013. From the Big 12 til the Sweet 16, he wasn't hitting much, and even when he did finally break out of it, he missed some good looks in crunch time and Trey Burke took us down. That's not an experience I'd like to see replicated with this team. Luckily we've got more guns this time around.

The picture of these very tall kids showing up at a roller rink sure gives me a giggle. I'd almost go myself just to watch. What a great group we have this year and to look forward to next year!!

Just love this article. There is so much personal insight, and we get to see how amazing Carlton is at this stage of his life. Can easily see why the coaching staff was so determined to recruit him.