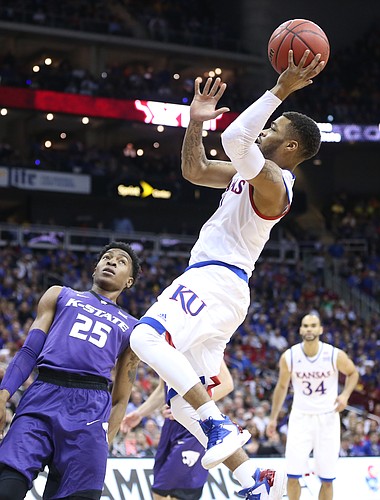 1 - Frank Mason III: Played extremely efficient game at both ends and finished with 16 points and seven assists and made 6 of 8 shots.

2 - Perry Ellis: Completely shut down Dean Wade (five points) and was too quick for any Kansas State defender who tried to guard him. Had 21 points, six rebounds and two steals and made 8 of 11 field goals.

3 - Devonté Graham: Was best player on the floor at both ends in the first half, when he scored all 11 of his points and swiped two of his three steals. Had eight assists and one turnover.

4 - Carlton Bragg: Fouled out in 11 minutes, time enough to score 12 points. Made 5 of 6 shots and both three-pointers. Looked good running the break, catching and finishing, shooting from the perimeter and doing everything on the offensive end. He was targeted successfully at the other end.

6 - Wayne Selden Jr.: Shot looked too flat and he made 1 of 6 overall and misfired a trio of three-pointers. Did nice job of setting up teammates, including a no-look beauty of a pass to Jamari Traylor, one of Selden’s three assists.

8 - Landen Lucas: Had four points and four rebounds in 17 minutes and played a part in D.J. Johnson not getting a rebound.

10 - Brannen Greene: Had two points and five rebounds in 10 minutes.

11 - Lagerald Vick: Played three minutes, time enough to get up two shots, neither of which went in.

Carlton's additions were unexpected, at least at the level he displayed. What a decided advantage if he can do that game in and game out.

Joey Brackets has us (again) in a possible 2nd round match up with the Shockers.