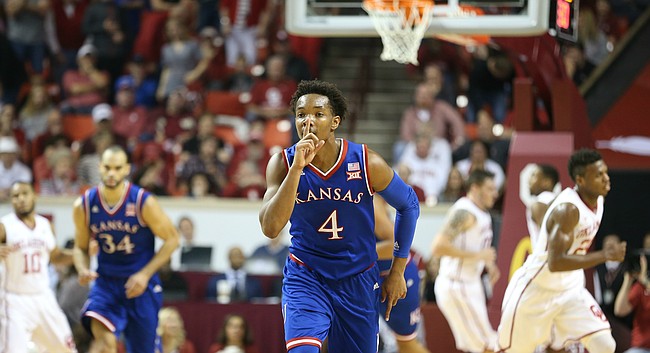 Kansas guard Devonte' Graham (4) shushes the crowd after hitting a three during the first half, Saturday, Feb. 13, 2016 at Lloyd Noble Center in Norman, Okla.

It was dubbed by folks down in Norman as “The Rematch” of the best college basketball game of the year.

And it wound up with the same result, albeit in much different fashion.

No. 6 KU knocked off No. 3 Oklahoma, 76-72, behind a 27-point night from sophomore guard Devonté Graham, who out-dueled OU’s Buddy Hield, who finished with 24 points after scoring just six (on six free throws) in the first half. The victory kept Kansas tied with West Virginia at the top of the Big 12 standings, at 9-3.

Kansas opened the game as well as Bill Self could have hoped, shooting 54 percent or better for much of the first half and keeping the Sooners to a very low percentage. 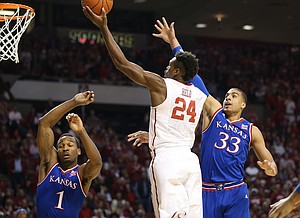 Part of that was OU just missing shots and the rest of the credit goes to Kansas, which crowded OU’s guards when they caught the ball and used active hands to disrupt the Sooners’ offensive flow.

After foul trouble and whistles plagued Kansas all afternoon, Frank Mason III fouled out on a three-point shot that Jordan Woodard made with 3:18 to play. Woodard hit the free throw and OU led 69-66.

• The game turned when: Kansas allowed OU to close to within five at halftime after an awful shooting first half by the Sooners. KU led 32-19 late in the first half but OU finished the half on a 14-6 run and that carried over into the start of the second half, when OU jumped out to a 6-0 start and snagged its first lead since 2-0, just 1:32 into the second half. 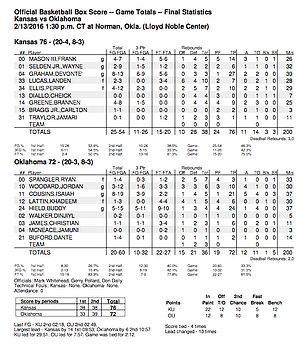 • Offensive highlight: Early on, Perry Ellis was virtually unstoppable every time he drove at the heart of the OU defense. Whether he was putting the ball on the floor and looking to score at the rim, or pulling up for three by using the space that threat created, Ellis had OU’s defense on its heels for much of the first half and helped KU build its big, early lead. Graham also came up with big shot, after big shot, after big shot for Kansas, and made sure the entire world knew about each one, screaming, clapping, jumping and yelling after every bucket, bringing the kind of energy that KU coach Self likes to see.

• Defensive highlight: With 17 minutes to play in the second half, Ellis rejected a shot by OU’s Jordan Woodard and then simultaneously, off of the same jump, saved the ball from going out of bounds. The play was a great reminder of just how athletic Ellis really is.

• Key stat: KU committed more turnovers (14-11) but scored four more points off of those turnovers (12-8) and that turned out to be the difference.

• Up next: After an emotional rematch at OU, the Jayhawks will have to do the quick turn-around, when Oklahoma State comes into Allen Fieldhouse Monday night for a Big Monday game at 8 p.m. on ESPN. 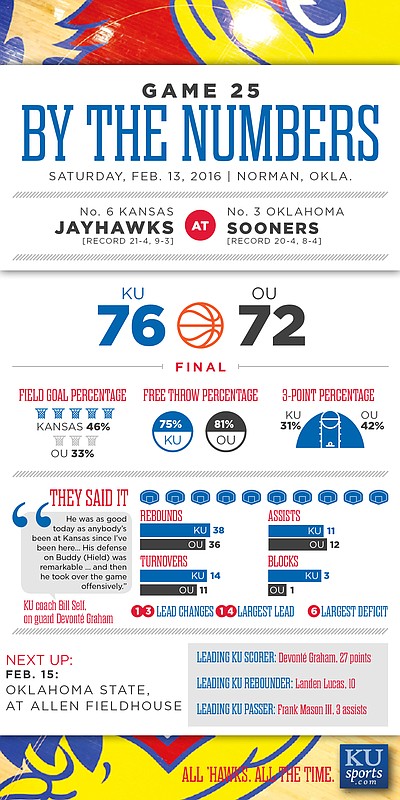 What an amazing game. Graham is an emerging star. The only question I had (besides the refs) was Self sticking w/Greene.

Stretch the defense maybe? Who would you use instead, Svi?

He realized he needs only one point guard on the floor. Greene poses a threat on the offensive end. Although he missed some threes, he is never left alone (when they include him in the game) opening up the floor for the others. He won't miss those threes too often. Graham or Mason. One point guard at a time please.

Depending on the matches the 2 point guard lineup can still be our most effective look.

As Coach acknowledged, our 4 out 1 in lineup was very effective. Perry, Wayne,Devonte, Frank and Brannon. If that lineup can stay close on the boards it does cause some match up problems for the defense. Coach gave the Major credit for bringing it up.

Up until about a week ago I would have said OU is the best team I've seen this season. There still good but struggled with UT at home and got trounced by the kittens. Is their lack of depth starting to show?

Sticking with you Jay, HCBS knows what he is doing and coached one of his best games. Players came to play today and this one was a huge steal. Congrats to one of the best efforts of the season.

This is almost all on DeVonte. OU played awful most of the game and we were bad but not that bad. The winners DeVonte and the zebs. Both imposed their will. This was a big win for our title aspirations. OU is not out of it but this type of showing in a big time game hurts their mojo a lot.

We are not there yet with four straight games but no real break out great game yet. This was a tough it out win but we are embarrassing mentally at times.

We are not close to a final four type team yet. Maybe we can be. We beat Kentucky, West "By God" Virginia and Oklahoma while showing big gaps in our game.

I disagree, Kent. I thought WVU was a fantastic game and this was darn good, especially on the defensive end.

Kent please name me your Final Four teams. As has been often said this year, there are no dominant teams that are odds on favorites to reach the Four. The parity is unreal. Like 15 or 20 other good teams we can beat anybody and lose to anybody. Name me your Final Four teams that haven't shown the same ability and disability of the top 20 to play great and then the next game lose to someone they shouldn't. I believe our chances to make a long tourney run are as good as anyone's.This week Virginia, Maryland, Baylor, Texas A&M, Oregon, WSU, USC, Purdue all go down. Makes for an exciting NCAA tourney.

Great game and arguably the best defensive performance by the team, especially the guard play if Mason and Graham. As we get closer to March, I'd love to see less Jekyll and Hyde play from Selden on the offensive side of the ball. The biggest game of the year to this point and he scores 6 with mostly jump shots and only one strong drive. he's an enigma on which Wayne will show up, so much talent. He's the new tyshawn Taylor.

What a great win. It is too bad people can't be more positive, after a win like this!!! Mike, Sometimes people watch, but don't really 'see'! Tyshawn Taylo had his challenges, but did you forget that the 2nd half of the season, "AND" in the NCAA Tournament, he was the cog that made the machine go, and led us to a runner up finish in the Tourney! And did I mention he had very few options to kick it out to, for jumpers. EJ, some, but Ty did it all. Sometimes people don't like someone, and no matter what they do, people only see what they want to see!

Joe, I love Wayne. I think he's the most talented starter we have. When's he's engaged and focused he's lethal from three and one of the few who can truly finish strong off the dribble by throwing it down. He played 32 minutes and was out scored by Greene and out rebounded by Mason. We need him to play to his potential (Taylor finally did his sr year with a great tourney run) in order to have a deep run in March. A great effort and performance today by the Hawks, not taking anything away from that. Think of what it would have been if Selden added 15 or 20 points!

Im so proud of our guys standing up on the road like they did. Graham was spectacular obviously, but everyone contributed to keeping the fire burning, even Bragg's single jumper felt like a godsend at the time he hit it. Many times it could have unravelled, and we kept fighting, quieting the crowd, going back up. The power of this team is keeping the other team guessing on who is going to have a break-out game - is it Graham? Seldon? Ellis? Mason? Landon? Greene? We are so unpredictable in scoring distribution and it makes for good offense, and fun games.

Tyshawn Taylor was awesome so I would not be trashing him. This was the third straight game we've played outstanding defense. Right when everyone thinks Coach Self was going to play a junk defense, he goes all man the whole game. Genius.

Barry, tyshawn was in the doghouse more than B Greene during his four years. He WAS awesome when he had his mind right his sr year and stepped up as a leader to contend for Nat Championship. No disrespect to him but he wasn't the model of consistency thru his career. great effort today, proud of the team!

agreed, it did some bonehead things. But I always felt good him bringing the ball up court and he was one of the best guards in recent history for breaking down the opponents defense. His length and ball handling skills along with being a 4 year player was hugh for KU.

Maybe Wayne was a decoy and it kept an OU player busy defending him and opening the lane for other players. You're not going to have x, y and z scoring 20 plus every game. You take what the D gives you plus Wayne played very good D. Ppl need to calm down

Dave, nice kudos to Coach Self and his staff. They are as good as anybody in the business. They make adjustments, and the results have been excellent over the years.