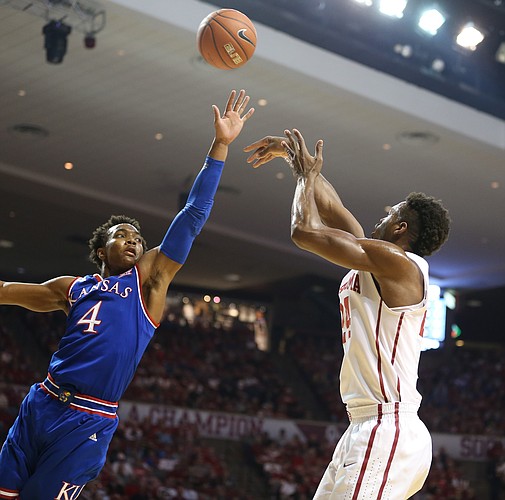 Kansas guard Devonte' Graham (4) lunges to defend against a three from Oklahoma guard Buddy Hield (24) during the first half, Saturday, Feb. 13, 2016 at Lloyd Noble Center in Norman, Okla. by Nick Krug

1. Devonte’ Graham – The star of the game on both ends of the floor, Graham not only outscored OU’s Buddy Hield, but also used lights-out defense to limit Hield’s production in the first half to six points. KU coach Bill Self said Graham grew up a little bit on Saturday. If he hadn’t, KU definitely would have lost.

2. Frank Mason – Fouled out on a tough-break scramble play late in the game in which he fouled Jordan Woodard on a three-pointer. Woodard made the free throw and Mason set the final 3:00-plus minutes. While he was in there, Mason delivered 14 points on hard drives to the rim and added five rebounds and three assists.

3. Landen Lucas – Another big night on the boards, Lucas logged 28 minutes, grabbed 10 rebounds and made 2 of 3 field goals and 3 of 4 free throws.

4. Perry Ellis – Great in the first half, quiet in the second, KU’s leading scorer missed the only two shots he attempted in the final 20 minutes. Added seven boards to a 10-point night and had an ultra-athletic block and save.

5. Brannen Greene – Made 4 of 8 field goals, just 1 of 5 from three-point range, and helped KU race out to a big lead in the first half. Played 25 minutes and made the most of nearly all of them, finishing with 9 points, 4 rebounds, 2 assists and 4 fouls.

6. Jamari Traylor – Played just 11 minutes but hit the boards hard as usual and used his athleticism to bother the Sooners in the lane.

7. Wayne Selden – Hit one monster shot (a late three-pointer in front of the KU bench) on an otherwise forgettable day. Finished 2-of-9 shooting for 6 points, 2 rebounds, one assist and one turnover in 32 minutes.

8. Cheick Diallo – Played 7 minutes, all in the first half, and, for all his faults — silly fouls, air-mailing the ball out of bounds a time or two — was very active when he was out there. Finished with 4 rebounds, 3 fouls, a block and a steal.

9. Carlton Bragg – Whistled for a couple of silly fouls, Bragg played just three minutes and hit his only field goal attempt, that free throw line jumper that he never hesitates to take and always seems to make.

Lucas appears to have become the best to play the center position. His subs are hard to decide which ones should play. The freshman are more potential than ability. I still remember Mickelson and his play in Korea yet he hasn't played much recently. As for Traylor like many others hard to believe he shows better ability than the rest. The word energy is meaningless unless results come with the energy. The subs for the guards are different it seems like for each game although Greene might have advanced more than the rest. Seems like Vick drains a trey every time he gets playing time. Hopefully the next 2 games will provide opportunity for those subs to get playing time. Great game for Graham and nice victory over Oklahoma.

If Graham shows maturity from here on out, he could really be a great Jayhawk.