The Day After: Trippin' up the Terps in the Sweet 16 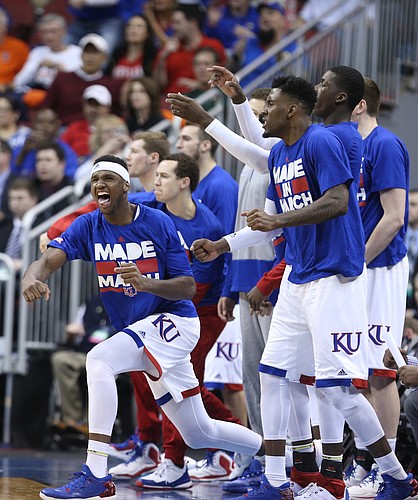 Kansas forward Carlton Bragg Jr., left, and players on the Jayhawks' bench erupt in the second half after a three by KU guard Wayne Selden Jr., Thursday, March 24, 2016 at KFC Yum! Center in Louisville, Ky. by Nick Krug

Maryland was bigger, they said. Kansas out-rebounded them. By a lot.

Maryland may have more overall talent, they said. Kansas had the three best players in the game.

Maryland would be a real test, unlike anything KU saw in Des Moines, they said. And yet Kansas still won by 16 points, 79-63 on Thursday night at KFC Yum! Center in Louisville.

There may have been more than a few signs pointing to the Sweet 16 match-up with Maryland being a serious challenge for the top-seeded Kansas basketball team, but the Jayhawks did not let any of those change anything about the way they do business.

This team is so focused and on such a mission that, at this point, it seems like it’s going to take a truly special performance by an opponent to derail the train the Jayhawks are rolling on right now.

I could not help but keep thinking after this one how it was pretty much the polar opposite of the UConn game. Instead of overwhelming the Terrapins in the first half, the way they did the Huskies last week in Round 2, KU survived a rough first half — with a two-point lead, no less — and then unleashed a second-half barrage that produced seven more points for the Jayhawks and five fewer points for the Terps than what each team had recorded in the opening half. In short, when it mattered most, KU rose to the occasion. And if you hope to keep advancing at this time of year, that’s exactly what you have to do. KU did that, in yet another impressive manner, and the Jayhawks are back in the Elite Eight for the first time in four seasons.

1 – Perry Ellis was good. We all know that by now. But the thing that impressed me most about Ellis’ big night was how well and how willing the Jayhawks were to ride him. For a stretch there in the second half, KU went through Ellis on every single possession and just dared Maryland to stop him. They couldn’t, of course, and that’s just good coaching, good chemistry and the latest crystal-clear sign that this group of guys (a) really plays well together (b) really likes each other and (c) will do anything it takes to win. Thursday night, that was feeding Ellis the rock and they did that over and over. 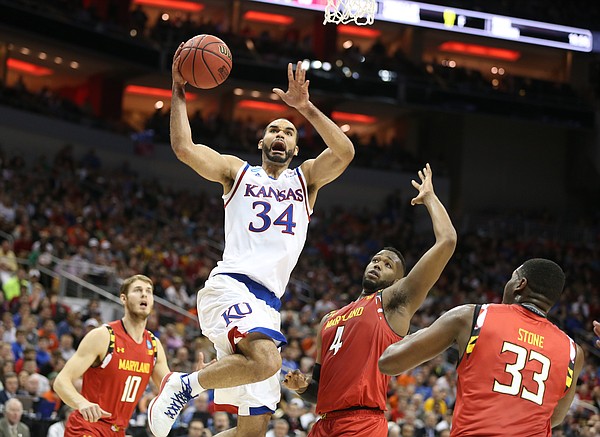 Kansas Jayhawks forward Perry Ellis (34) gets to the bucket past Maryland forward Robert Carter (4) during the first half, Thursday, March 24, 2016 at KFC Yum! Center in Louisville, Kentucky. by Nick Krug

2 – Give Kansas credit for not panicking early on when things weren’t going well. In year’s past — perhaps even earlier this year — KU might have just forced up a bunch of three-pointers on a night when an opponent frustrated their offensive flow. Not Thursday. Not only did KU stay tough and continue fighting to find something that worked, they only took nine three-pointers all night, another sign of how well they understood how dominant Ellis was. 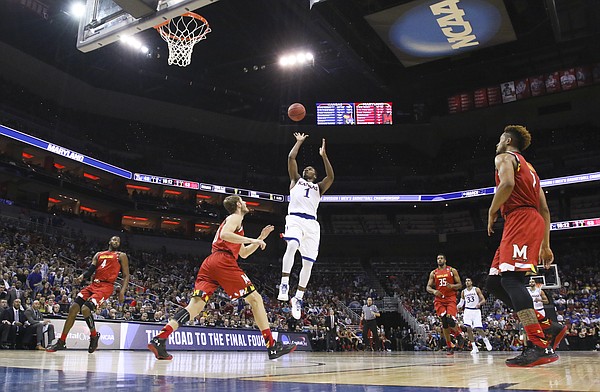 3 – It sure is fun to watch Wayne Selden play locked-in, intense basketball. And, boy, what a clutch player he has become. You can tell this run means something to Selden. It shows up in just about everything he does out there. And his numbers and production are matching his mindset. Selden was great again Thursday night (19 points, 7 rebounds, 6 assists) and there’s no reason to believe he’ll be anything but that on Saturday as well.

1 – There were quite a few silly fouls by Kansas in this game, a couple coming from Jamari Traylor and at least one more coming from Frank Mason. Fouls that come from effort and energy and intensity you can live with. But fouls that come from momentarily losing your focus or laziness with your feet aren’t good. And they really won’t be good if they show up Saturday night against a Villanova team with a veteran backcourt and a roster that made 18 of 19 free throws in its Sweet 16 win on Thursday night. 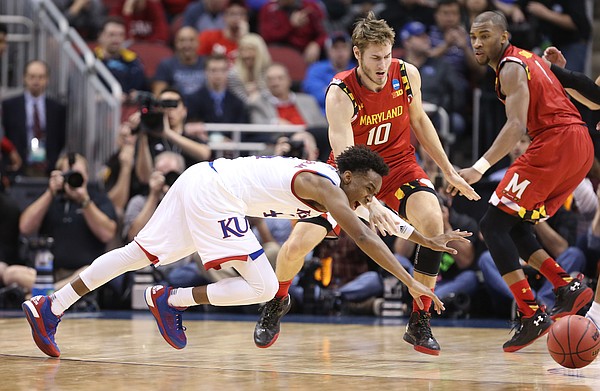 Kansas guard Devonte' Graham (4) lays out for a loose ball with Maryland forward Jake Layman (10) and guard Rasheed Sulaimon (0) during the second half, Thursday, March 24, 2016 at KFC Yum! Center in Louisville, Kentucky. by Nick Krug

2 – It didn’t end up hurting them, but it could down the road. There were a handful of empty possessions in the second half that ended with careless, unforced Kansas turnovers, most of them coming with KU up five and in position to go up seven or eight or up nine and in position to make the lead double digits. On at least a few occasions, that kept the door cracked for Maryland, who never seriously threatened after the first few minutes of the second half. Still, the fact that those moments were the result of self-inflicted wounds is something to sigh about. 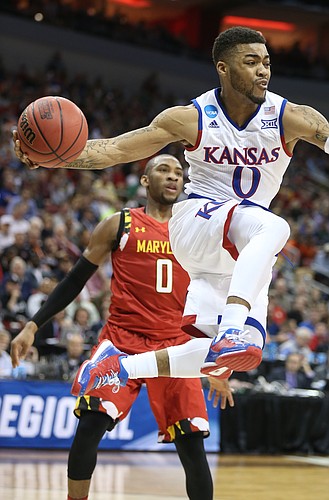 Kansas Jayhawks guard Frank Mason III (0) gets airborne to throw a pass across the baseline during the first half, Thursday, March 24, 2016 at KFC Yum! Center in Louisville, Kentucky. by Nick Krug

3 – Devonte’ Graham gets a pass because he was playing through injury and illness, but losing Brannen Greene to injury altogether is not the kind of news you want this time of year. Greene sat out the game because of back spasms and does not appear to be likely to play on Saturday. Although it’s been 10 games since he played more than 11 minutes — and in those 10 games he has made just three shots total — Greene’s still a little bit of a veteran and, even if he’s not hitting or even taking deep threes, he’s a threat to do so. Plus, he’s a terrific free throw shooter. KU can overcome his absence. But it’s definitely not something Jayhawk fans wanted to hear about.

Here’s how KU’s Sweet 16 victory over Maryland in Louisville impacted the program...

• WINNING STREAK: Kansas extends its winning streak to 17 games... It is KU's longest of the season and the longest active winning streak in NCAA Division I... KU features 14 winning streaks of 10 games or better during the Bill Self era.

• AWAY FROM HOME: KU is now 18-4 away from Allen Fieldhouse this season... The Jayhawks have won eight-straight neutral-site games, not including the Dec. 12 win over Oregon State at Sprint Center in Kansas City, which was deemed a home game by the NCAA.

The Jayhawks advance to the Elite Eight for the first time since 2012, when they defeated North Carolina to reach the Final Four. Top-seeded Kansas will play No. 2 seed Villanova at 7:50 p.m. on Saturday at KFC Yum! Center. 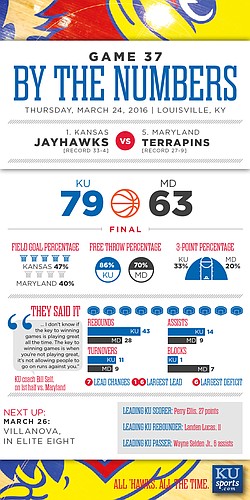 What's missing from most reviews of the game is that Kansas only attempted 9-3's, making 3! 9-3's? In the day when teams are now attempting anywhere from 15-24, that's an amazing stat made even more amazing that Kansas scored 77, I mean 79 points! This team has weapons and isn't just a one-dimensional team.

And how did the refs miss the double dribble by Layman on the break away dunk? Seriously Folks

I agree on both points (obviously) and was shocked they missed that double dribble. In fact, when the whistle blew to T him up for hanging on the rim, my initial thought was that a trailing official saw it and called it late.

Those things happen during fast-paced games/plays so I get it. But dude picked the ball up with two hands and then started dribbling again. Crazy.

Sorry Matt, but the loss of Greene is not that big of a factor. Self has his 8 man rotation. Greene does give us a shooter, but he does not have a game driving to the hoop. He is a defensive liability and offen appears lackadaisical on the he floor. His use is very narrow.....now watch him hit a 3 to win one of these games and prove me wrong.