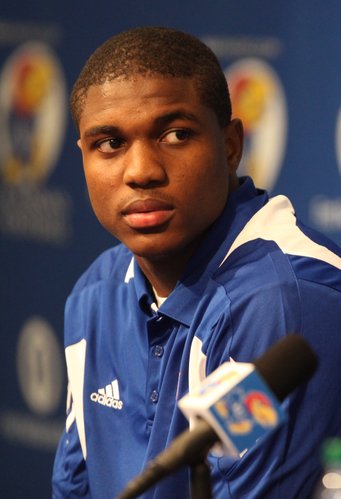 Receiver Justin McCay, a transfer from Oklahoma, listens as his teammates answer questions on Monday, Jan. 16, 2012 at the Anderson Family Football Complex. by Nick Krug

The NCAA, as a whole, often is viewed a cold and cruel entity.

And while that may be true in terms of areas like exploiting student-athletes or chasing down the almighty dollar at any and every opportunity no matter how big or small, those are both topics for another blog.

For this blog, it seems more appropriate to view the most popular governing body in college athletics as a big, cuddly teddy bear. Because in recent cases like the one the NCAA will hear today for Kansas University wide receiver Justin McCay, the NCAA more often than not has shown great compassion in granting hardship waivers to transfers in need of getting closer to home.

McCay, you no doubt know by now, is the former Bishop Miege High standout who went to Oklahoma after high school but recently elected to leave OU to transfer to Kansas in an effort to get closer to his family and hometown.

There are reasons that McCay needed to do this, but they’re both private enough and important enough for KU coaches Charlie Weis and Tim Grunhard (who coached McCay in high school) to refrain from talking about them and OU coach Bob Stoops to happily grant McCay a release from the Sooners.

What the reasons are do not matter. That they exist is the only thing that’s important. And judging by what little Weis and Grunhard have said about McCay’s situation, it appears as if the 6-foot-2, 215-pound wideout has plenty of reason to believe that he will be next in line to be granted the waiver for immediate eligibility. A ruling could come as soon as today and should come down no later than Thursday. 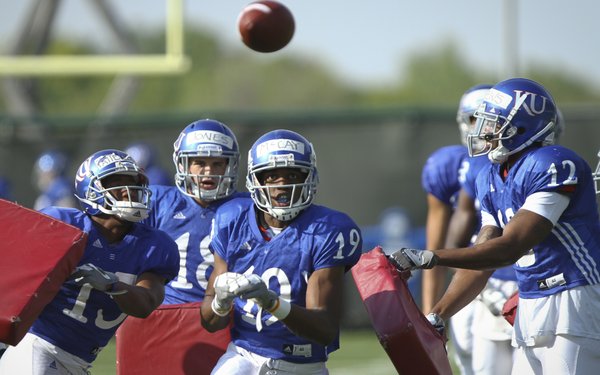 Transfer receiver Justin McCay breaks through a line of defenders to catch a pass during practice on Tuesday, April 10, 2012. by Nick Krug

While we wait, here’s a quick look at five cases similar to McCay’s in which a student-athlete was granted the hardship waiver and allowed to play immediately upon transferring to his new school, which, in every case, was closer to his hometown.

• DB, JOSH SHAW, USC
Five days ago, Shaw’s waiver was granted by the NCAA after a long and drawn-out waiting process much like the one McCay has endured since transferring to KU in January.

Shaw, the USC defensive back who transferred from Florida, was granted a hardship waiver after the NCAA reviewed his case, which involved his ailing father and grandfather and the need to be closer to their Palmdale, Calif., home to help run the family business.

"We were optimistic the whole time, but it took so long," Shaw told ESPN.com. "So we were like, 'Man, why is it taking so long?'”

• QB, BARRY BRUNETTI, OLE MISS
Last April, the former West Virginia quarterback, with a little help from WVU coach Bill Stewart, received an eligibility waiver from the NCAA that made him eligible at Ole Miss for the fall of 2011.

Despite being in good shape to compete for the starting job at WVU, Brunetti, who is from Memphis, elected to join the crowded QB mess at Ole Miss and, therefore, appealed to the NCAA to waive the transfer rule because he wanted to be closer to his mother, who was still recovering from injuries related to a car accident. Memphis is about 90 miles from Oxford, Miss.

Brunetti received the waiver and completed 19 of 35 passes for 144 yards during the 2011 season.

• C, DASHONTE RILEY, EASTERN MICHIGAN
One minute, DaShonte Riley was walking off the floor in a Syracuse uniform after the Orange had fallen to Butler in the 2011 NCAA Tournament. The next, he was suiting up for Eastern Michigan and former Syracuse assistant Rob Murphy at Eastern Michigan in his home state.

Riley was granted a hardship waiver because of his concerns about health issues that plagued both of his grandparents. He initially wanted to transfer in January of 2011, but waited until June at the request of his mother, who wanted to make sure they took all of the proper steps. By December, his waiver was approved and the 7-foot center was suiting up for EMU.

"We are thankful to the NCAA for granting Da'Shonte the waiver for him to become eligible for competition right away," Murphy said in a statement. "Da'Shonte transferred to EMU so he could be closer to his family in a difficult situation. I'm happy that he is able to give his family the support they need."

• WR, JAMEEL OWENS, TULSA
This one may represent the best reason McCay should have high hopes.

During the summer of 2010, Tulsa wide receiver Jameel Owens learned that his waiver request had been granted by the NCAA despite the fact that he was asking to transfer from Oklahoma University, in nearby Norman, Okla., to Tulsa, just down the highway.

Owens requested the waiver so he could be closer to his mother, who was dealing with serious health issues.

"We're excited for Jameel and his family. He's been through a tough time this past year and it's good to see this happen for the young man," TU coach Todd Graham said in a statement. "Jameel has done a great job since he's been here at the University of Tulsa."

• G, JAKE KELLY, INDIANA STATE
The following is part of a press release from Indiana State in October 2009, following the news that Kelly’s request for a hardship waiver had been granted.

The National Collegiate Athletic Association announced today that the year-in residence requirement for junior transfer Jake Kelly has been waived due to his extraordinary personal circumstances.

Kelly is eligible to play immediately for Indiana State after transferring from Iowa after the 2008-09 academic year.

“I am really happy for Jake and his family that the NCAA is going to allow him to play this year,” Indiana State head basketball coach Kevin McKenna said. “This decision will mean a lot to his close friends and family. I think that this is really going to help him and his family with the healing process. The ability to have his mind on school, basketball and our team while playing will be the best thing for him.”

In making this decision, the NCAA released the following statement:

The NCAA staff has granted Indiana State University’s request to waive the year-in-residence requirement for its men’s basketball student-athlete Jake Kelly. Mr. Kelly’s previous institution, University of Iowa, was supportive of this waiver request. The waiver, which will allow Mr. Kelly to compete immediately, was granted based on his extraordinary personal circumstances. The chronology of events supported his transfer to a university that will allow him to be closer to his family.

The NCAA has established a waiver process and criteria to address unique situations and extenuating circumstances that are not outlined in our rules. Each situation is reviewed carefully on a case-by-case basis with the interest and well-being of all student-athletes in mind.

“This process was very professional and handled well by the NCAA,” McKenna said. “We also owe a lot to our compliance department for the way that they took care of this waiver request and handled it in an extremely efficient manner. The NCAA had enough information that they were able to take into account Jake’s personal well being and make the correct, informed decision.”

no need to correct spelling, kusportsdotcom will do it for me

Not sure what you coming out has to do with Justin, but I'm glad you're finally comfortable enough to share it here with us. All those macho college stories never fooled us anyway.

LOL ~ one of the worst movies of all time IMHO.

I thought the announcement was to come no later than Thursday. It's now Thursday at 5:30 and still no word. Is no news bad news?

Could be. But I doubt it. Just moving slow for some reason or another. I was told by Coach Weis this morning that it would be today.

I asked: "Would you be shocked if it wasn't today?"

He answered: "It'll be today."

Thanks, Matt! I was assuming if it wasn't announced by around 5:00, it wouldn't be announced today.