Although he orally committed to Kansas University weeks ago, former Notre Dame tight end Mike Ragone's place at KU was not official until Tuesday, when he signed a financial aid agreement with the Jayhawks.

Ragone, a 6-foot-4, 262-pound tight end, joins the Jayhawks after being granted a sixth-year of eligibility from the NCAA in mid-March. 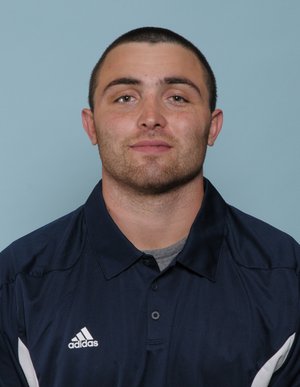 The Cherry Hill, N.J., native missed the entire 2008 season with a knee injury and was lost for the 2011 season after suffering another knee injury during the third game of the year. He graduated from Notre Dame in May 2011 with a degree in sociology.

Ragone, known more as a blocking tight end, played in 37 games during his five seasons at Notre Dame, recording 11 catches for 109 yards. He played in 11 games for the Irish as a true freshman in 2007, hauling in one reception for seven yards versus Navy. Ragone also had six tackles on special teams as a freshman.

“I’m pretty excited right now,” Ragone told the South Bend (Ind.) Tribune in March. “It’s going to be great playing with Dayne again. He’s a great guy and a great quarterback. I asked for one more chance, and I got it.”

The addition of Ragone brings KU's list of Class of 2012 recruits to 26 players. The Jayhawks have added six players as Div. I transfers, nine junior college transfers and 11 high school athletes.

Meh. Long term getting 5th year transfers with one year of eligibility will not work and will only hurt the team in the long run. Weis needs to focus more on getting younger players who will be in the program for a longer period of time. These one hit wonders (if that is what they are, and I question that) will not turn the program around.

Weis got here late and needed to do something considering what was available. I think he did the right thing. Maybe we can finish in the top half of the Big 12 with former Notre Dame players. So far nothing he has done is cause to be a bit critical of him. Thank the Lord we got something like Weis after the previous misfire.

The only problem with you thinking is that the only player that looks half way decent is Crist. But even he wasn't a starter and neither were the other players. If they couldn't cut it at ND then how are they going to cut it in the Big 12? Color me skeptical.

welcome adn congrats on the 2nd chance, nice to see the ncaa do something right every other year or so. I hope KU can use him a little more in the passing game though.

You're almost as good at football as you are at BB. Maybe as good.

Sounds to me like he has been underutilized. Hope we can fix that!

He really doesn't have good stats because of his injuries. It will be a win if we can just keep him on the field the whole season.

Yeah, it was there but in a weird spot. I just bumped the picture up and it looks better now. Thanks for pointing it out....

Are you in Pain? Or is that another curse word?

Sounds like he's going to be a great addition- I think what we're going to see w/these 5th year guys is EXECUTION - they're going to hit their assignments the way pros do- which gives us a HUGE advantage- no one doubts Weis is going to design a great offense- the question is can it be execute by college kids -but these aren't college kids.

One of these highly-touted-out-of-HS transfers will pan out in a big way. How wonderful to have these guys to get the Weis era off to a fast start.

Someone who can essentially be used as a 6th offensive lineman, the running game should be pretty solid next year even with Sims missing the first 3 games.

When you look at the mix of players: transfers, juco and freshmen, it looks exactly the way you would think a top-notch coach would go about it. Grab a group of older guys who can help fill holes in the dam, get a decent group out of high school and immediately start working on the next recruiting class.

A TE with his size and speed will also be a factor in the passing game. This is no concrete-footed lineman type TE: http://www.youtube.com/watch?v=ffQQXi7YnNk

I'm sure that's what the Fathers at Notre Dame told him when he announced he was going to play at KU! Please note the sarcasm font.

When will we officially be changing our colors to Blue and Gold?

Or Green and Gold? Or whatever their colors of the month are.

All in fun - Rock Chalk IrishHawks

Notre Dame ...... The Kansas of the upper Midwest!

Gasp! Notre Dame is in the upper Midwest!!!! How about the secular Notre Dame. I shall say the Rosary for you tonight.

You see a lot of complaints when we compete with or add a kid that N. Texas, Tulsa, Northern Illinois or Betty Crocker Culinary Institute was after, but when we add someone who was a top 100 player at one time and might be again with a fresh start there are still some complaints. This is our best chance at top recruits till we have some on the field success.

...if he even makes it to Sept without blowing a knee. Tough to retain leg strength while constantly rehabbing (three) torn ACL's.
I'll be rooting for him...but not holding my breath. I've torn three as well and have had five different surgeries with other ligaments. Very, very, tough road.