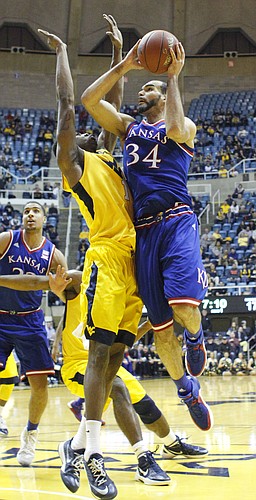 Kansas forward Perry Ellis drives to the basket for two points in a game between the Jayhawks and the Mountaineers at the WVU Colliseum in Morgantown, W.V. Tuesday. by Mike Yoder

1. Perry Ellis – The only guy who got anything going offensively, Ellis finished with team highs in points (21) and rebounds (7) and probably should've touched the ball 100 more times.

2. Landen Lucas – His numbers — 2 points, 6 rebounds, 4 fouls, 1 block, 1 turnover — don't tell the story. Lucas was up off the bench early and appeared to be ready for the physical battle that West Virginia brought. But a couple of silly fouls kept him from finding a rhythm and hurt the Kansas defense.

3. Jamari Traylor – Two points, four boards and two steals in 11 minutes isn't bad. His turnover was, but at least it looked like Traylor cared, as he displayed by slamming two hands onto the scorer's table after a miscue. Both he and Lucas at least looked like they wanted to play.

4. Devonté Graham – Played frantic all night and never looked comfortable with the ball. Managed seven points, three assists and three rebounds before fouling out and gets the nod here because he had just one turnover.

5. Wayne Selden Jr. – Hit two three-pointers early and appeared to be headed for a big scoring night. But then he went cold, made just one of five shots the rest of the night and turned it over an improbable six times.

6. Frank Mason III – An off night any way you slice it. Turned it over seven times and scored 11 points on 3-of-6 shooting in just 25 minutes.

7. Hunter Mickelson – Started yet again but played just five minutes and scored one bucket with two rebounds, one offensive.

8. Carlton Bragg – Three points and three rebounds in six minutes. Also turned it over once and was called for basket interference.

9. Brannen Greene – Looked a little too much like the Brannen Greene of old. No effort, no energy, no intensity no makes on two attempts. Did manage to snag four rebounds.

10. Svi Mykhailiuk – Played 17 minutes and had next to nothing to show for it. Missed all four shots he attempted — 0-of-3 from three-point range — and fouled three times.

11. Cheick Diallo – Had a chance to spark the team on a night it really needed a lift, but committed two out-of-control fouls, one rebound and one steal in four minutes.

12. Lagerald Vick – Came in with the outcome already decided and banked in a three-point shot to give him three points. Also grabbed one rebound and a foul.

Lucas has really stepped up during Big 12 play.

Never a good sign when Traylor and Lucas are 2 of the top 3 performers...

Maybe Lagerald Vick should have been given more opportunity. He seems to be a spunky kid who is not afraid to score. I know that he came in when the game was decided... but I feel that he needs to be tried out as well.

He definitely shows energy. Looking forward to seeing more of him.

Here are the weighted Keegan ratings for conference play. How it works:

Perry leads because he hasn't taken a night off and he has played his best against OU and WVU, our hardest competition to-date.

Don't feel too bad, guys. The West Virginia team had to stay in Morgantown after the game and you got to return to Lawrence.