The Jayawks, currently ranked No. 1 in the nation, will play host to the Wildcats, currently No. 14, at 6 p.m.

UK leads the all-time series, 22-6, and has defeated KU in three straight meetings, including the 2012 national title game.

In the most recent KU-UK matchup, Karl-Anthony Towns and company steamrolled the Jayhawks, 72-40, at the 2014 Champions Classic, in Indianapolis. 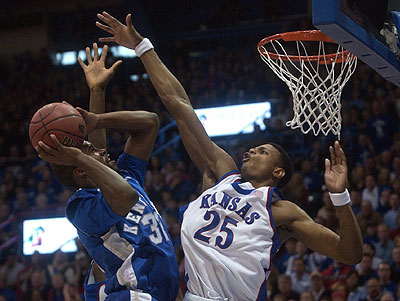 Kansas University freshman guard Brandon Rush, right, rises to block the shot of Kentucky's Joe Crawford during the first half of the Jayhawks' lopsided 73-46 rout of the Wildcats. Rush had 24 points, 12 rebounds, four assists, two blocks and a steal in the victory Saturday in Allen Fieldhouse. by Jared Soares/Journal-World Photo

This year marks the first time all 10 games in the Big 12/SEC Challenge will be played on the same day.

As a Kentucky resident and huge Jayhawk fan, I've been looking forward to this game all season. It's payback time for last years bloodbath

This game potentially has recruiting implications as well. Since we are guaranteed to play Kentucky at least once every three years, I dont think we necessarily need to worry about scheduling them more often, but games like the one coming up are certainly a treat. On the subject of scheduling, I think the WSU game contributes to the strength of schedule in the non-con and I cant imagine that Kansas fans dont want retribution for their kicking us out of the tournament last year.

Retributions do not win Championships. If out paths crosses each other again, then the Jayhawks will take care appropriately. However, I would not bet any money WSU will reach that far this season.

WSU record is not as strong right now (due to Fred Van Vleet early season injury), and Conner Frankamp not yet being eligible to play (for the majority of the games that WSU lost).

But, WSU will be in the NCAA Tournament in 2016. They're undefeated on Valley Conference play. And, blew SIU-Carbondale away this past Saturday.

You never know what the NCAA Tournament Committee will do.

Retributions may not win championships, but neither do they lose them. They do, however, make for dramatic televised games. In addition, to seek retribution in the first place means you lost to a pretty good team if you're Kansas (most likely), and it's not just the payback that means something; rather, facing good teams that beat you and winning against them builds mental toughness and confidence, and even facing them sharpens focus and builds team solidarity. No drawbacks...

As of today Lunardi has WSU playing as the #9 seed setting up a possible rematch in the first weekend of games. I know that doesn't mean much now but I found that very interesting

The SEC left out Alabama, Mississippi State, South Carolina, and Missouri. They included a currently 7-7 Auburn and left out undefeated South Carolina. Just thought that was interesting.

Aside from Kentucky, Florida, and possibly Vanderbilt, no one in the SEC office cares about basketball. Football is king in the old Confederacy.

It is funny how casually the SEC has smacked Mizzou around since they "let" them join. Scheduled them so unfavorably against the border rival Arkansas and give zero props for winning the SEC west or south or north, whatever. They knew it was coming but insecure schools make for patsies.

Are these games something both teams agree to? Could we ever be scheduled against Missouri against our will?

No. The schools have some input I believe.

Usually, the ESPN Gameday feature game is played later in the evening. I wonder if this 6:00 tip time indicates it won't be in Lawrence that weekend. Seems hard to believe there will be a better venue on the 30th . . .

The West Virginia-Florida game is at 11:00 CST, not noon, on ESPN. That creates an hour at 3:00 between the Iowa State and Oklahoma games for a broadcast from the Fieldhouse. I would assume Gameday will broadcast from Allen at 10 that morning for the regular show.