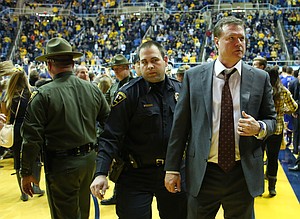 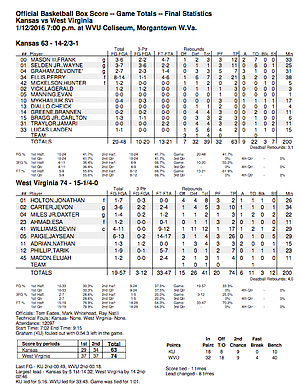 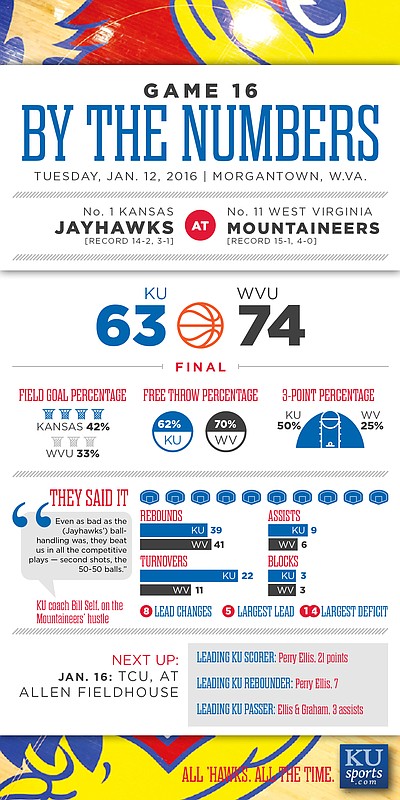 KU embarrassed themselves and got punked by a team that outplay them. How else does a team shoot 33% and maul you. Self did not have the team ready and they got punched in the mouth and just stunk.

I agree with Dustin. A lot of folks are saying we shouldn't blame the refs, but seriously!?! A team built around the philosophy of hacking and slapping at the ball all game and getting as many deflections as possible should not EVER shoot twice as many free throws as their opponent. It's absurd.

We didn't play like the #1 team in the country because we are not the #1 team in the country, we were #1 in the ap poll because the ones in front of us lost, Oklahoma was more deserving than we were, that's why people who have good knowledge about teams, the coaches, picked OU #1, if we weren't at home we would've had no shot to win that game. We can get there, but right now Bill Self doesn't trust the bench which is supposedly a talented deep group, but we were embarrassed by wvu's bench, who at one point had a 30-2 advantage before some of our subs scored in the last couple of minutes. I am a die hard KU fan but the last couple of years has been the hardest I have ever gone through, I just hope the guys take pride and learn from this, I am tired of seeing teams play so much harder than us, tonight was embarrassing. Our guards have too much experience to play as bad as they did tonight, this conference title is totally up for grabs, lets hope our guys dig in and learn from this.

I don't mean to be "that guy", but KU is number one in both polls. So the coaches, who know more about teams, picked wrong also?

Up until last night, the Jayhawks have played like the best team in the country.

See the USA Today/coaches poll for yourself:

This team looked "soft" like the 2nd half of MSU game

We shouldn't expect to win all conference games and it appears WV will be a contender for the crown. A problem I see is the lack of inside players positive play. Coach at this point in the season should know who should be the leaders and who should be backup players. Tonight there simply wasn't a plan that consistently played. Maybe when he decides who should start and who will be the backups the team will play better. Tonight 6 played and only Ellis gave a winning performance.

If KU IS THE NUMBER TEAM IN THE COUNTRY then how can you say we should not expect to win all of our conference games? I even heard Bill Self and Landon Lucas say that. That really pisses me off cause that's exactly how they played, like "oh well, we no we won't win all of our conference games so let's just sleep walk through this one". Then why don't they just call ahead and tell WVU, ISU, and OU that we want to save travel expenses so we forfeit? If I'm the number one team in the country I'm going to give it everything in my power to stay that way and as a coach I would never say something like that. Number one in the country my a$$!!! Embarrassing to say the least. There, I got that off my chest. Even if no one reads it I feel better. I love the Hawks and suffer greatly when we lose, but not when we lose like that. ROCK CHALK!

It was my understanding that the conference decided last year that any school who "stormed" the court would be penalized. What happened to that?

Self is right when he says that WVU has two "good" road wins, but only because all road wins are good wins.

West Virginia won at TCU (probably the worst team in the league) and at K-State in a game that K-State lead the nearly the entire second half.

West Virginia will take its lumps when it starts playing the top-half of the league on the road, just like every team will.

Joe you are right on, besides KU, WV has played probably the bottom three teams in the B12 in KS, TCU and OSU. Lets see where they stand after the halfway point. RCJH

Don't know why teams insist on court-storming after they beat us especially in conference play. Whatever. I think the team may have been tired. I didn't get to watch. We've got a starting five that can beat anyone on a neutral court. our bench isn't perfect, but they are good. Road games can make you look bad. I think we'll be fine, just have to keep being aggressive on the offensive end and STOP MISSING BUNNIES!

KU looked slow-footed, which resulted in the foul differential and throwing the ball away big-time (Earth to Frank Mason...get yourself together, Bruh).

Rest up at AFH and start over.

It's incredibly hard to do, but I wish the players could play with some energy on the road. I realize everyone feeds off the crowd at AFH, but KU looked dead legged last night.