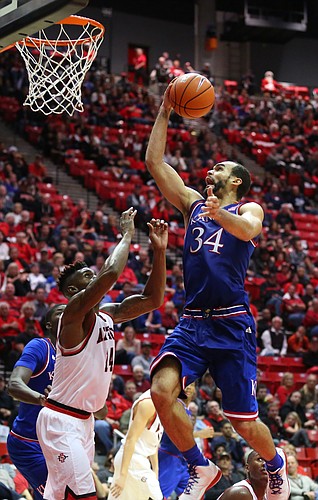 Kansas forward Perry Ellis (34) gets up for a bucket against San Diego State forward Zylan Cheatham (14) during the second half, Tuesday, Dec. 22, 2015 at Viejas Arena in San Diego. by Nick Krug

1 - Perry Ellis: Buried a pair of threes and an 18-footer from the top of the key and drove to the hoop with ease on his way to game-high 20 points. Also had two blocked shots, three assists, three rebounds and five turnovers on his most active night of the season.

2 - Wayne Selden Jr.: Scored eight of KU's points on an 11-0 run that pumped a four-point lead to a 15-point one. Had a three-point shot and three-point play during the stretch and carried team out of a funk. Was whistled for two fouls in the opening two minutes and didn't play the rest of the half. His three-pointer from well behind the top of the key was the biggest shot of the night, giving KU a seven-point lead at the start of the 11-0 run.

3 - Devonté Graham: Has developed into a nice pest to opposing ball handlers and does a nice job of getting to the paint. Totaled 10 points, there rebounds, three assists and two steals.

5 - Jamari Traylor: Has made 16 of 20 free throws, including 4 for 4 in this one. Gave a strong defensive effort and hustled his way to six rebounds, four off the offensive glass. Had three steals and a blocked shot.

6 - Brannen Greene: New, mature, unselfish attitude he has shown since coming off a five-game suspension was in full bloom again. Hustled on defense, kept the ball moving on offense, hit the boards hard and produced four points, four rebounds, an assist, a steal and a blocked shot. In the 26 minutes Greene was on the floor, Kansas outscored San Diego State by 20 points.

8 - Cheick Diallo: Made a pair of mid-range jumpers and hustled his way to three rebounds and a steal. Also found himself badly out of position.

9 - Carlton Bragg: Would have liked to see him dunk the ball instead of throw it off the glass when he was wide open underneath in the first half. Played six minutes, blocked a shot and had one rebound to go with the easy bucket.

10 - Sviatoslav Mykhailiuk: Missed both three-point attempts in seven scoreless minutes and had one assist. 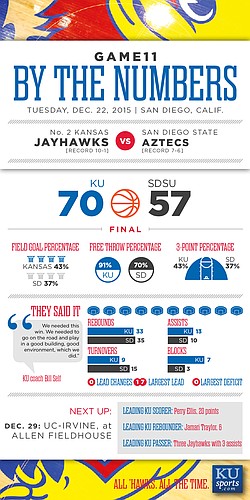 I feel bad for Cheick...He really does look out of place at times. I'm beginning to think the five extra games may not have helped very much. Certainly that experience would have helped some, but he's looking like what he really needs is at least two years of college. I'm not saying that I think he'll stay, but it's hard seeing him get a lot of PT as we get into conference play...I hope that the unlimited practice time the next few weeks really brings him along...I also feel bad for Self because he'll face a lot of criticism for not playing him more, but when you're trying to win, you've got to go to your guys that will play the best...

I have a great deal of respect for Self as a coach but I think he tends to over-value winning early season games above letting young guys play in tough game situations where they can gain valuable experience and be better prepared for late season basketball. For this group, the upper class-men big men know what they need to do. Putting Cheick or Carlton in the games for bigger minutes in pre-conference play would perhaps cost us a game or two (Harvard or SDSU) but it also might have helped those guys progress faster. Then again, playing them may have knee-capped their confidence. Navigating these dilemmas are why Self and other blue blood coaches get paid millions.

Self will play them when they show that they are ready. Right now, they make jaw-dropping mistakes revealing that they are definitely not getting it.

Couldn't agree more with Jeremy on this one. Here's what I don't get: Cheick did the same mistakes when faced with double team in the previous games as well. He's young. Perhaps, he needs to be given these kind of drills during practice. He needs to be prepared for college D1 ball. It seems like coaching staff has to get these young guys more real-game simulation kind of drills. That's the only way to see how 'ready' they are. Benching them won't help much. But, psychologically, maybe.

I agree with Self's decision to limit Diallo and Bragg's PT....this game.

Tough environment for freshmen to play well in. Bragg & Diallo looked noticeably frazzled in the first half. Couple that with Jamari playing really well in the second half... I'd rather lock down a win in a tough environment than risk a loss at the expense of maybe allowing some maturation from the frosh.

I have mixed feelings about this. I definitely agree with you in that Self's M.O. is to let the experienced guys play rather than bringing up the young guns in non-conference play. But I always think about Izzo up at MIchigan State. (Ignoring this year), his teams always struggle early on. They get doubted and questioned. And they are habilitually in the Final Four come the end of the year. For him, the early season is all about growth for the younger players and bringing them along and it seems to work well for him. But, that doesn't mean I think that's right. I struggle because while I want the young guys to grow and become better, it's hard to not give guys like Lucas, Michelson, and Traylor minutes as seniors who have put in over 3 years of hard work for newcomer, lost freshmen who at times don't seem to know which basket is theirs. I would let the seniors play. (Though i would also bring Ellis's minutes down by 5-8 and give them to Bragg/Diallo).

Our practice squads need to use ball fakes so we can recognize that other teams will use that against us. Hunter on the three point foul was funny @#@$ and Wayne was not focused at the start for sure.

Our bigs are consistent slow developers except for maybe Embiid. When you are used to being a foot taller and go to same height or shorter you have to overcome years of conditioning.

You also have to wonder how much of a difference it makes not having Danny to coach the big men. They did seem to develop more quickly in general when he was there.

That's debatable. Cole, the Morris twins, Robinson all became NBA players. None of them were developed players as freshmen but that's what we're expecting now out of Diallo and Bragg.

Hunter on that 3 was hilarious. I think there's a certain part of him who just thinks he has to get blocks when he's in the game and so he completely sold out.