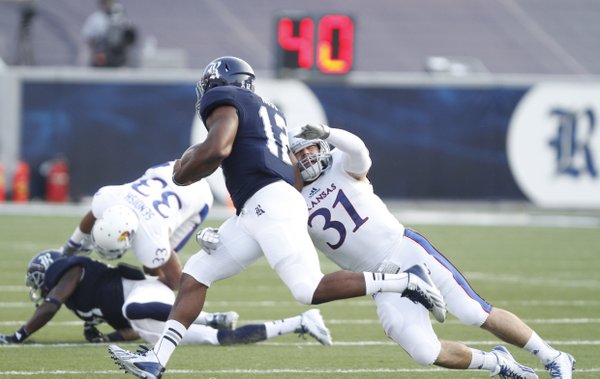 Some in the dwindling KU football fan base, when not grousing about football not getting enough ink, like to gripe that they’re sick and tired of all the “hype” stories written about a football program that has gone 9-39 in two seasons apiece under Turner Gill and current coach Charlie Weis. Bemoaning the “hype” stories has become particularly fashionable these days.

Nobody levels that charge regarding stories about senior middle linebacker Ben Heeney, entering his third season as a starter. Heeney has accomplished so much that projections aren’t necessary when discussing what he could do in the upcoming season. It’s all right there on the athletic department’s website, “captainheeney.com,” devoted solely to promoting the best player during a Charlie Weis era that’s off to a 4-20 start: Two-time, second-team All-Big 12; team-leading 88 tackles as a junior, despite missing two games with a knee injury; third in the Big 12 with 112 tackles as a sophomore, the same season he ranked fifth in the conference with 12 tackles for a loss.

But the way Heeney and his coaches look at it, those numbers are about yesterday and were compiled for teams that generated so little buzz their fans couldn’t have been cited for a noise ordinance in a monastery. In order for Kansas to improve enough to win more than last season’s three games, all the key players must improve significantly and Heeney is not exempt from that. He’s fast, tough and relentless. Yet, he still needs to harness that attitude and talent in a way to avoid getting out of position to make plays. Defensive coordinator Clint Bowen addressed that need for improvement with one of the more memorable quotes of the spring.

“I think he can make another jump,” Bowen said. “Even a year ago, I think he left a lot of plays on the field, stuff that we’ve talked about. I’ve compared him many times to the dog that sits on the porch. When the car goes by, he can’t help himself. He runs and bites the tire. But sometimes if he would just slow down a little he might not get run over.”

He continued, saying that if Heeney could play, “a little bit smarter, (become) a little better at reading and reacting, he could even show up on a few more plays. I think he could even have a better year than he did a year ago.”

If it wasn't for an injury, Heeney probably would have been first team big 12. He improved a ton on coverage and was a force again. He took down that big rice running back all by himself, something A&M couldn't do. He already has good reactions but if he can improve on that even more, he will easily surpass 100 tackles. Question is how will the line in front of him hold up. They improved a ton last year from the year before. If the interior guys can hold their gaps and the ends get pressure, it will allow Heeney to run free. A solid front 7 changes everything for a defense.

Let’s not forget Nick Reid. Heeney has a ways to go to match what Nick did by his Junior season. The guy was a tackle (and TFL) machine and Big 12 DPOY.