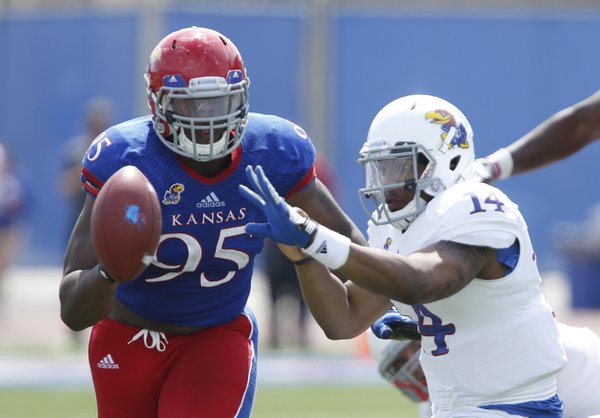 White Team quarterback Michael Cummings pitches the ball to a teammate as Blue Team defensive lineman Andrew Bolton closes in during the second half of the Kansas Spring Game on Saturday, April 12, 2014 at Memorial Stadium. Nick Krug/Journal-World Photo by Nick Krug

There was a lot of hype surrounding Bolton last summer because, at 6-foot-3, 285 pounds and with a penchant for getting to the quarterback, Bolton represented the kind of player KU had not seen in a while.

Big, strong, explosive and focused on nothing more than chewing up QBs, Bolton would have been a big addition for the defensive line. An early injury kept him off the field during his first season in Lawrence, but the year off might have been a blessing in disguise for the Hinds (Mississippi) Community College transfer.

See, instead of being rushed out there at less than 100 percent, the time off gave Bolton a chance to heal. While he was healing, he also took full advantage of the opportunity to work on his body, absorb the playbook and watch and learn what life is like at the Division I level.

With such knowledge now his, the expectations are again high for Bolton, who figures to hold down the left side of KU's D-Line while defensive coordinator Clint Bowen and D-Line coach Buddy Wyatt play around with the flexibility the other guys up front provide.

We talked to Bolton briefly during fall camp last year and the only thing I remember is that he was a quiet guy. He seemed a little shy when dealing with the media and it would have been a shame if any kind of uncertainty about his place at this level or this school showed up on the field in 2013.

He's been here a year now. He knows the coaches, he knows the scheme and he's at least seen what big-time college football looks like. It's now his turn to be a part of it. And if he's ready and able, KU's defense has a chance to be a heck of a lot better immediately.

KU coach Charlie Weis had this to say about Bolton at Big 12 media days in Dallas earlier this week:

"Bolton came in banged up and really wasn't ready to go. And he's a big, physical, bruising type of guy that I would have liked to have played last year. I'm glad we didn't."

Bolton, MJM, Shorter are all part of the last recruiting class that never saw the field that could potentially produce a quantum leap in the D this year. The DL could be thin this year, tho hopefully at least 1 of the 2 (?) JC DE's will be contributors.

So much for MJM.

This is great news! We definitely need DL's that can pressure QB's. Andrew will bolt past the opposing offensive lineman and grind the quarterback to hamburger!