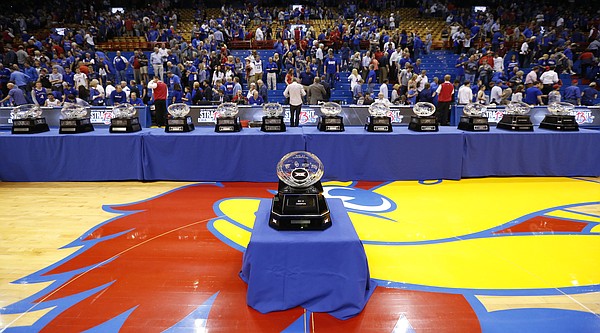 The Jayhawks' 13-straight Big 12 conference trophies are lined up along the court, Wednesday, Feb. 22, 2017 at Allen Fieldhouse. by Nick Krug

Kansas versus TCU didn’t exactly stand out on the college basketball schedule Wednesday night in terms of mass appeal, what with Duke facing Syracuse and North Carolina tangling with Louisville. But there’s something about a team winning its league 13 seasons in a row that will capture any college basketball observer’s attention.

Though some might have considered it a foregone conclusion, the Jayhawks officially became Big 12 champions yet again, sealing at least a share of the title with an 87-68 win over the Horned Frogs, allowing them to hoist a league championship trophy at Allen Fieldhouse afterward.

KU’s latest hardware put the program in a tie with the UCLA teams of the 1960s and ’70s for most consecutive conference championships in a row and set off reactions from current and former KU players on social media platforms.

National analysts, too, weighed in on the Jayhawks’ long run of dominance. Below are some of the highlights from the aftermath.

None by Josh Jackson

None by Tyler Self

Blessed to be apart of something special #13straight

None by Dwight Coleby

None by Jeff Withey

🙌🏾🙏🏾 - it's so lit - congrats to everyone who helped build this avd to this team for keeping it going ! https://t.co/ZAdnvFDplW

13!!!! And this one is the most impressive in my opinion! Proud to be a Jayhawk!!

Too close to KU to not be there rn. 😕 it's litttttt

None by Brannen Greene

Back in good ol Lawrence Kansas. Man I love this place so many great memories here. And the fans are the best in the world

None by Andrea Hudy

Devonte' with the block.. Svi with the spike! Might need to get @Devonte_Graham4 and @Sviat_10 a volleyball tryout!#13straight

Kansas beats TCU and clinches the Big 12, tying UCLA (1967-'79) for the most consecutive regular-season conference titles with 13. pic.twitter.com/d8rZWQjFee

From KD, to Blake Griffin, to Michael Beasley, to Buddy Hield, some exemplary individual talents have failed to dethrone Kansas. pic.twitter.com/f6HcaWku2X

One more only because its fun: What the world looked like 13 years ago when Kansas' streak started. pic.twitter.com/pV9aF0DJQe 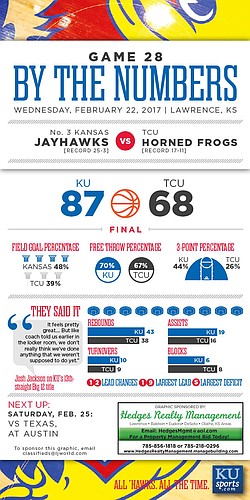 Where's Barbara Billingsley when I need her?