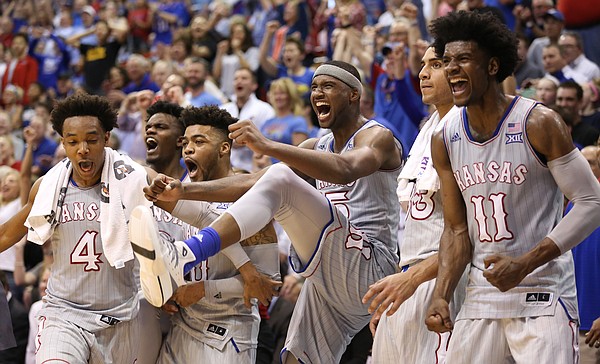 The Kansas bench erupts after a dunk by Dwight Coleby during the second half, Wednesday, Feb. 22, 2017 at Allen Fieldhouse. by Nick Krug

The Jayhawks scored 87 points and didn’t even need to shoot above 50 percent to do it. Four players reached double figures and the Jayhawks were good from inside and out, with crisp passing leading to easy buckets, strong transition play and a 10-of-23 clip from 3-point range.

Nothing real impressive about this effort, but KU’s offense made sure it didn’t matter. If I had a dollar for every time KU coach Bill Self looked shocked, dismayed, angry or upset about something his defense allowed TCU to do, I’d be able to upgrade to the Early Bird Boarding on this weekend’s flight to Austin. That said, KU did hold TCU to 39.1 percent shooting and also out-rebounded the Frogs, 43-38, after getting out-rebounded 26-18 in the first half. Those two facts elevated this from C+ range into B territory.

Landen Lucas was decent but far from great in his least amount of playing time since returning to the starting lineup (17 minutes) and Carlton Bragg Jr., more than made up for it with a monster night.

Three of KU’s four double-digit scorers were guards, including Frank Mason III’s game-high 20 points and 17 from Devonte’ Graham and 15 from Josh Jackson. Lagerald Vick cooled off and Svi Mykhailiuk continued to be quiet.

Bragg (7-of-10 shooting for 15 points and 7 rebounds) was spectacular but Vick struggled for just 3 points and 3 rebounds in 26 minutes. The rest of the bench, though all entering the game contributed precious little to the cause, save for Dwight Coleby’s big time slam with attitude late in the game.