All-around action puts Josh Jackson at top of ratings in title-clincher vs. TCU 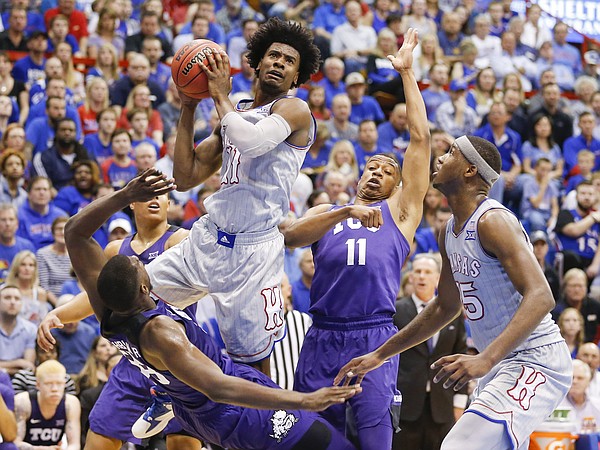 Kansas guard Josh Jackson (11) goes up to the bucket after a blocking foul by TCU forward Chris Washburn (33) during the first half, Wednesday, Feb. 22, 2017 at Allen Fieldhouse. by Nick Krug

1 — Josh Jackson: Great dunks and passes, boards and deflections made for a coast-to-coast spectacular night for Jackson (15 points, 11 rebounds, four assists, one turnover, one steal). With all the technological advances in sports, when is someone going to invent a device that instantly flashes the velocity of dunks on the scoreboard? Jackson’s one-handed flush on a transition lob from Frank Mason early in the second half made a loud noise and triggered a louder one from the crowd. Jackson’s passing was every bit as impressive, including his lob to Lagerald Vick and quick interior pass to Landen Lucas. Jackson unwittingly also was responsible for the quietest moment of the evening. With 11:37 left in first half, he came down hard on his right foot, writhed in pain on the floor while gripping the bottom of his sneaker and immediately headed into the locker room and returned about five minutes of game clock later.

2 — Frank Mason: Made 4 of 6 3-pointers and scored a game-high 20 points to go with four assists, another strong night for his Wooden Award case.

3 — Carlton Bragg: Even Lazarus would have been impressed. Terrific night from the sophomore, who busted from a season-long slump with energetic, productive play. Ran the floor hard and had 15 points, seven rebounds and three blocked shots in 22 minutes. Had eight points, five rebounds and two blocked shots in 13 first-half minutes. In the strangest moment of the night, his early free throw got stuck on the side of the rim, not something you see every day on a free throw.

4 — Devonte’ Graham: Scoreless with seven minutes remaining in the first half, Graham caught fire and never cooled off. Finished with 17 points, four rebounds, seven assists and just one turnover. Reverse layin, a 3 from top of key off the dribble, another 3 after a shot fake and dribble got him off to a good start in the first two minutes and change of the second half. Celebrated his 22nd birthday by celebrating his school’s 13th consecutive Big 12 regular-season title.

5 — Landen Lucas: Picked up two fouls in seven scoreless first-half minutes with just one rebound. Finished with seven points and six rebounds on a night he committed four fouls and played just 17 minutes.

6 — Svi Mykhailiuk: Made 2 of 4 3-pointers, turned it over twice and finished with six points in an unimpressive night.

7 — Lagerald Vick: Has to get to the 3-point shooter a lot quicker, as in don’t think first, just run at him, eliminate that blink of a hesitation and get those long arms in front of the shooter. Missed all three 3-point attempts, but did trigger wild reaction from crowd by throwing down lob from Jackson and pitched in with three rebounds and a blocked shot in 10 minutes.

9 — Mitch Lightfoot: Trillion-club entry. One minute, zeros across the board.

Best part of tonight was Braggs fire. If he sustains that, then we will be very tough.

Agree mostly. Svi had his best all around night in a couple of weeks. Didn't get beat on defense, blocked shots, and would have had more assists if teammates hadn't missed shots. The story of the night, though, is Bragg. Hope this game takes the lid off of his slump.

Points don't matter that much. Mason caused a couple of us losing possessions. He still need to find ways to get others involved. Bragg should be #2. He should be able to sub Lucas anytime if CB keeps playing like this. Graham should be #2. He deserves more credits than #4- and it's his birthday today!! Why isn't Young or Self in your list? :D

So who should be number 2, Bragg or Graham???

Keegan has never rated the walk-ons.

"Even Lazarus would have been impressed."

Great observation. The odds of a left coast liberal being the first to comment on that were astronomical. I'm pleasantly shocked.

The odds of a Neanderthal -- er, neocon -- not making an asinine political comment are even more astronomical.