Kansas linebacker Joe Dineen Jr. (29) gets a thank you from Marialuz Cardenas, grandmother of Andre Maloney and Rosaelida Montoya, Maloney's mother after presenting them with flowers during the pregame Senior Day ceremony on Saturday, Nov. 18, 2017 at Memorial Stadium.

Typical starting receivers Jeremiah Booker and Quan Hampton, who have been ruled out for the season due to injury, weren’t the only passing targets watching instead of playing when the game began.

Leading receiver Steven Sims Jr. didn’t start for Kansas, either, though he returned punts and eventually joined the offense in the second quarter and played when he could.

“Steven is still trying to get well,” KU head coach David Beaty said after the junior wideout played sparingly and caught two passes for 38 yards. “Took a big hit against Texas last week. I thought our athletic training staff did a terrific job getting him back to being able to play this week because he was not looking good throughout the week. He's a tough dude. I didn't think he was going to be able to play.”

After Sims’ first punt return in the first quarter, Beaty added, “I thought he was done, and he just refused to go out. I got to give the guy credit. He's tough. He's a tough dude, because I know he was hurting. We've got to get him well because he's one of our big-play guys.” 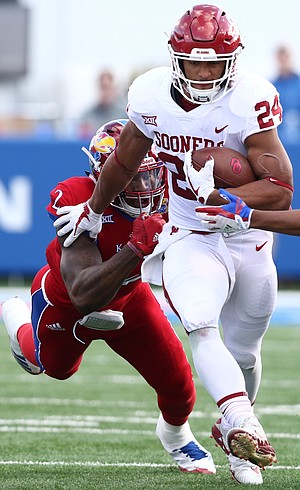 The matchup with the No. 3-ranked Sooners marked the final home game for 10 Jayhawks, who were recognized with members of their family prior to kickoff at Memorial Stadium.

The line of honorees also included a spot for Andre Maloney, a former Shawnee Mission West standout who died in 2013, during his senior high school season.

KU redshirt junior linebacker Joe Dineen, part of the same recruiting class as Maloney, wears No. 29 in his honor.

Dineen delivered flowers to Maloney’s mother, Rosaelida Montoya, and his grandmother, Marialuz Cardenas, and hugged them both.

In a showing that featured just his second sack of the season, Armstrong made six total tackles, 1.5 tackles for loss and was credited with a quarterback hurry.

“That kid deserves it,” Beaty said. “He's busted his tail. He's caused a lot of production for other people. He's done some really, really nice things for us. Seeing him get back there and get (Baker Mayfield) down was a big deal. I think that will lead to more this week, I certainly hope.” 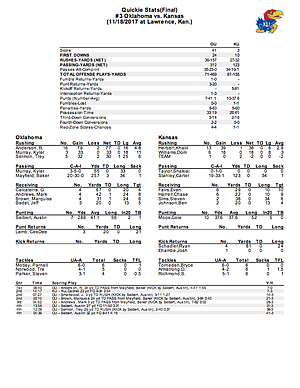 Tovi, Chris Hughes and McCauley all got hurt a week earlier, during the first half at Texas.

We have a beautiful senior day, one that encapsulates the passing of a Jayhawk that would have been a senior. We have the pomp of one of the top teams in the country coming to Memorial stadium. We have the Heisman hopeful likely the person that will celebrate this award at the end of the season. We have two kids standing at the center of the Jayhawk witnessing the time honored tradition of tossing a coin and shaking hands, oh but wait. Our coach is has been a disaster has coached these young men to be bad sportsmen. They refuse to shake hands with the name of college football. What? I'm not a Beaty fan and have been outspoken about his coaching ability; however, as bad as he is as a coach, this is the worst and the most embarrassing thing that he has done. Dr Zenger, please do your job and suspend HC David Beaty for a game. This is an unacceptable behavior by our football team, and Coach Beaty does not deserve the honor of coaching our team next week for a stunt and embarrassing moment like that. This was a sad day for Jayhawk football. I know we have been shut out twice this year, trashed by teams on the field throughout the year, but all of those embarrassing moments pale in comparison to teaching those representatives of our university our captains of our football team in performing such an unsportsman like act.

This was embarrassing and if you don't do something, I hope the Big XII does, we deserve better than this.

Go find some other witches to hunt. The players decided to do it not Coach Beaty.

And if shaking hands is so important, why were the other OU players standing with their hands behind their backs.

Only 10 seniors in the graduating class. Shows how bad the program was when Charlie Weis was fired. More than 1/2 of the scholarships went to student/athletes who did not make it to graduation. At least next year there will be more experience and the balance between classes will be better. In football, depth is essential because of injuries, and for KU to make any improvements it will be on the backs of Beaty's junior and seniors. This is why coaches get 5 year contracts, so they ultimately take the field with a senior class (including red-shirt seniors) they developed. However with that said as everyone is aware, year three showed little if any improvements. I said when they hired Beaty it was time to stop the revolving door of coaches and give someone the 5 years to develop a program - no matter what. However, next year is now my make it or break it season to be competitive, win some games, and get KU out of bottom of the nation's worst football programs.

Andy, you’re right on. You can’t operate a major college football program short handed; you just can’t. And we’re short handed this year, no doubt. I agree with you, next year is the show progress year, or it’s time for new leadership. The program had no numbers in the spring of 2015, and everyone was talking about five or six years to get it back; it’s now only year three. You can’t have it both ways. Did we all want better football this year? Of course; but as we have all rehashed on here ad nauseam, CW blew out the numbers with all of his transfers and JUCO transfers that never played a down. Everyone had short memories, how bad it was. As far as the non handshake? I wouldn’t have done it, and I don’t condone it. But it at least shows some moxie, some fight. The kids aren’t stupid, they know it’s probsbly going to end up 1-11; and they’re still battling.

The best thing about this football season is with so many injuries lots of #2's and #3's are getting on-the-field reps which you just can't get with weekly practice. The increased experience should help all players be more competitive during spring and fall football camps and create some new starters, or at least experienced backups, for next season.

Props to Joe Dineen for such a kind, thoughtful gesture. I’m sure it meant a great deal to Andre Maloney’s family. RIP Andre!