Tom Keegan: Growing with each game, Jackson doesn’t play like a freshman

Kansas guard Josh Jackson (11) gets in for a bucket against Texas Tech forward Zach Smith (11) late during the second half, Saturday, Feb. 11, 2017 at United Supermarkets Arena in Lubbock, Texas.

Lubbock, Texas — Josh Jackson arrived at Kansas with a sophisticated basketball mind and perpetually revved motor, but in the months of November and December he flashed teenager moments.

He quickly gained a reputation as a hothead with referees, who slapped him with technical fouls to show who’s boss. At other times, he charged full speed ahead right into a defender who already had established position.

He was a teenager then. He turned 20 Friday and said he felt older when he woke up.

Nothing about the way Jackson took over the game Saturday afternoon in United Supermarkets Arena and led Kansas to an 80-79 victory against Texas Tech had a trace of teenager to it. 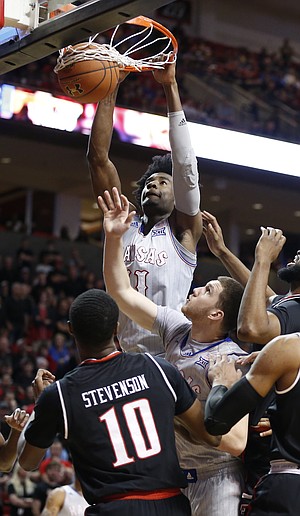 Freshmen do grow up and Jackson played very much like a senior on his way to a long NBA career.

He played all of about 20 seconds, didn’t get whistled for a single charge against a team skilled at drawing them, had the ball in his hands a ton and committed just one turnover on his way to a 31-point, 11-rebound, four-assist masterpiece on 12-of-15 shooting.

The 13,806 spectators saw him at his very best and will think about the game when they’re channel surfing and stumble on an NBA game a year or 10 from now.

Afterward, Texas Tech coach Chris Beard was rightly proud of his experienced players for doing what they did to slow down Frank Mason, win the battle of the boards, and turn it over just twice in the second half.

Deeply impressed would be the best words to describe the Tech coach’s take on Jackson.

“I thought about asking him after the game, ‘Hey, Jackson can I borrow a couple hundred dollars? I’ll pay you back next year when you’re in Lubbock,’ 'cause he’s not coming back to Lubbock," Beard said.

True. Chances are, Jackson won’t ever step foot back in Lubbock.

The same can be said for the rest of KU’s one-and-done players regarding Lubbock. But Jackson does set himself apart in this respect: There never has been one who unpacked his bags to the same extent as Jackson.

No one else quite ranks with him in terms of both giving and receiving as much from the experience as Jackson.

Joel Embiid, more raw than Jackson when he arrived, improved at a more rapid rate, but injuries ended his season prematurely. Andrew Wiggins in many ways seemed to approach his stay as a layover on the way to the NBA.

Xavier Henry brought a good attitude and grew his game, but doesn’t have the athleticism or quite the same motor as Jackson, and wasn’t as ready for the jump to the NBA.

Jackson’s been all in from Day One and it shows in how steadily he has improved the past three weeks.

With a game so advanced in so many ways, it was easy to forget he was a teenager when his competitive spirit and pumping adrenaline would get the best of him. But he was a teenager and teenagers by definition sometimes do things that experience teaches them to count to 10 before doing again.

“From where he came earlier the year, he plays so hard, he’s competitive, it took him a while to kind of understand college officiating, but now he acts great on the floor,” Beard said. “He acts like a pro. He lets the game come to him. From where I was sitting, I don’t think he forced one shot.”

Good point. Nothing about the freshman's 40 minutes seemed forced.

Jackson drove hard to the hoop early for points and when the lane became clogged, he stayed under control and found open shooters in the corners, again making me think that point guard one day could become his long-range NBA position. One beauty to his approach is that he never plays like someone auditioning for the NBA. He plays like a kid desperate to win to keep the court, and in this game he did so with Frank Mason on the bench, disqualified by five fouls.

Desperate to win, yet under control, a sign of growth.

“Josh is kind of a high-risk, high-reward player,” Kansas coach Bill Self said. “His assists-to-turnovers (ratio) will never be 3-or-4-to-1 over the course of a season because he’s going to take his chances, which we like, but today I thought he picked his spots really wisely.”

The most entertaining spot Jackson picked to try an aggressive play came in the second half when he took a defensive rebound out of the sky, quickly wound up and fired an outlet pass that Devonte’ Graham chased down and flipped back to Lagerald Vick for a dunk.

“I used to play quarterback back in the day,” Jackson said. “No I’m kidding. I saw him open and just threw it. Landen makes that pass all the time. I just threw it and didn’t really think about making a mistake. I think that’s the biggest thing we’ve got to go out and do, just play with a free mind.”

Jackson’s been shooting with a freer mind and hit a nice free-throw line jumper off the dribble to stop a Tech run in the second half. He also made 2-of-4 3-point shots and has made 15-of-28 in the past seven games. If you thought Jackson had that kind of a 3-point shooting run in him, raise your hand. Now stare into a mirror at the face of a pathological liar.

Jackson’s no longer a teenager, but is still a freshman, so he’ll make mistakes here and there. But he’s also really smart, so if and when he stumbles on the court and elsewhere, chances are good he’ll learn from it, check his emotions the next time and let his brain take over.

After his best performance as a college basketball player, Jackson sounded sure he has room to grow during his Kansas career.

“Every now and then everybody’s going to have a bad game or not play as well as they normally do, but I think there are definitely a lot of places where I can improve in my game,” Jackson said. “Free throws is definitely one of them, ball-handling. I think if I get that under control and start doing better in those areas, I’ll start to progress a little more.”

Kansas needed him to be the best player in the game Saturday and he delivered, which was just good enough to escape Lubbock with a 22-3 record and solo hold on first place in the Big 12. 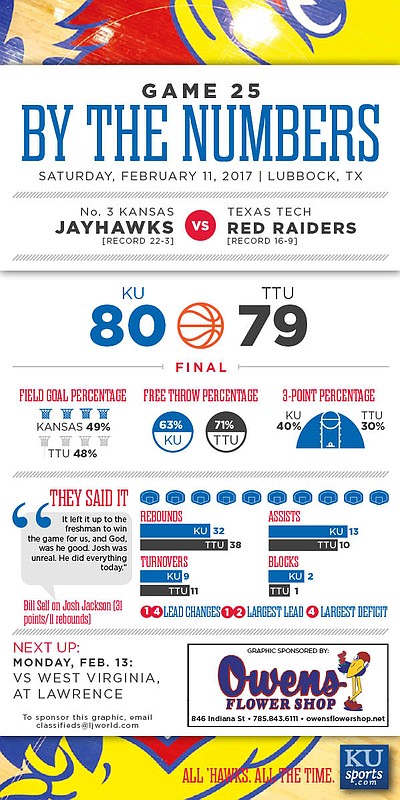 A bit of history repeated in Lubbock, TX. Twice now TTU saw a Kansas OAD star beat them in the last seconds of the game. Wiggins hit that dramatic last second tip-in to beat TTU on his only visit to Buddy Holly's home town.

Although Jackson has been consistently excellent, this game could be his and the team's turning point for the season. For the first time, Jackson carried the team throughout the game and came through in the clutch to get us a huge win.

With WVa and at BU coming up, this would be a good time for the team to start pulling all the pieces together. We really haven't had a game yet when all our guys are clicking simultaneously.

We're not likely to. Very rare that a team fires on all cylinders. We did against North Carolina in the Final Four in 08. Against DePaul in December of 07. That Oklahoma game vs. Buddy Hield might qualify, as well as when we had beaten Tennessee in 2009? Certainly against Kentucky in the 150 game.

But I can remember few times where we saw each player fulfill his potential on the court simultaneously.

Good memories. I'll add 2003 vs Marquette in the tournament semi-final.

Well, Tom, you said it early and have stuck with it. I think your story and words (like back in December) were something like "Josh Jackson best OAD in Self tenure." Or something to that effect. I challenged your contention as way too early to make such a statement. Well, you were right. Clearly he is a great player. But distance and opportunity have prevented me seeing him play live so far this year. And as always, some things don't translate through the TV screen and can only be viewed and felt live and in person. I hope to get to experience that this year before the phenom is playing at the next level next year and beyond.

Excellent article and analysis by Mr. Keegan. He has given us a wealth of insight into what Josh is made of. He clearly is an unbelievable talent with a marvelous head on his shoulders. Whether he is better than Andrew Wiggins is irrelevant, but his impact on the program is certainly greater in my opinion. He will give 110% every time he steps on the court at whatever level.

Wiggins certainly did not give much of an effort in his last game vs. Stanford...same goes for Oubre vs WSU. Hope Jackson proves to be an exception when the going gets super tough in the NCAA Tournament.

At least Wiggins is a comparable talent. Oubre not so much.

Tom, what happened to the photo contest? Can't find it on the site.