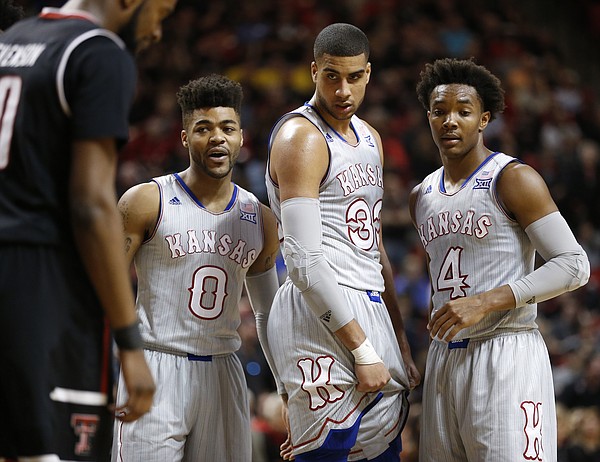 Quick grades for five aspects of KU’s 80-79 victory at Texas Tech on Saturday.

The Jayhawks shot 49.2 percent from the floor, 40 percent from 3-point range and turned it over just nine times while getting to 80 points. There were times in the first half where KU’s crisp passing and willingness to make the extra pass — or in some cases two or three extra passes — looked like an absolute clinic.

Texas Tech shot 48.3 percent from the floor and 30 percent from 3-point range and did most of its damage right at the rim. The Red Raiders did hit a bunch of tough, mid-range jumpers, but also got a bunch of layups on drives to the basket and went to the free throw line 21 times.

Landen Lucas was solid from start to finish — save for his 3-of-6 showing at the free throw line — and came up with several big buckets and big rebounds during KU’s win. Carlton Bragg Jr., also gave a few good minutes, but also sprinkled in a few too many head-scratching mistakes, too.

KU’s top two guards got outscored 47-18 by Texas Tech’s top two guards (Evans and Stevenson) and the Jayhawks consistently watched the TTU guards blow by their perimeter defense. Still, KU’s defense played big when it mattered down the stretch and Josh Jackson and Svi Mykhailiuk combined to score 40 points to aide KU’s typically solid duo of Graham and Mason.

Lagerald Vick had a huge transition dunk and scored five straight points during one stretch in the first half. And Bragg scored a big bucket out of a timeout. Other than that, neither player factored too much into the game during their 37 combined minutes.

Those numbers are fixed. Thanks for reading.

Thanks for the catch. The grades were what I intended for this particular game but I accidentally was looking at an in-game box score instead of the final box when I posted this. Honest mistake.

Appreciate you checking out the site and our content throughout the years!

... or the copy editors were busy celebrating after the close victory.

According to Tait on Vick and Bragg, "neither player factored too much into the game during their 37 combined minutes."

C'mon Tait, you're usually better than that. That's the kind of comment a casual fan would make...not a lead sports writer. The casual fan only thinks a player has done well if he scores a bunch of points.

With Frank ailing, Vick's minutes were very valuable even though he didn't score a bunch of points. Without Vick who would we have gone to? Tyler?

Did you miss this part?

"Lagerald Vick had a huge transition dunk and scored five straight points during one stretch in the first half."

Vick played some valuable minutes, sure, but that's nothing new. Outside of those buckets that were mentioned, his stat line had very little on it. One rebound, one foul, one turnover and a bunch of zeros.