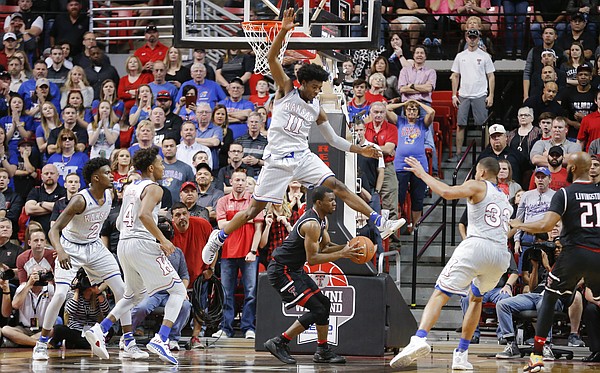 1 - Josh Jackson: As dominant a performance as any Kansas player has had this season. Played 40 minutes and committed just one turnover. Made 12-of-15 shots, 2-of-4 3-pointers and 5-of-7 free throws. Did a terrific job of finding open teammates, sometimes in the corner after the lane became clogged on his drives. Played so under control on his way to 31 points, 11 rebounds and four assists. Committed just two personal fouls.

2 - Landen Lucas: Had only five rebounds, but two huge ones late in the game came off the offensive boards. Set the screen that sprung Jackson for a drive that resulted in him hitting the game-winning free throw.

3 - Devonte’ Graham: Did a nice job of keeping the ball moving, but when he was open and it came to him he drew too much iron. Made 2-of-8 shots, including 2-of-6 from 3.

4 - Frank Mason: Played 13 first-half minutes and had one point and two fouls. Was 0-for-3 from field in first half and couldn’t keep Keenan Evans (17 first-half points) in front of him. Mason, slowed by illness, performed better in the second half before fouling out with 3:05 left. Finished with 12 points and five rebounds in 26 minutes. Played entire game without an assist, breaking streak of 44 games with at least one assist.

6 - Svi Mykhailiuk: Niem Stevenson carved him up with drives to the hoop and although Svi sparked Kansas with nine first-half points, he went scoreless in the second half.

7 - Carlton Bragg: Had three turnovers in 12 minutes to go with two points, two rebounds and three turnovers. His hands have been so shaky that at times it looks as if guards put up contested shots, rather than run the risk of him dropping a pass, an understandable decision.

Don't forget about Graham's amazing assist to Vick after the football pass from Jackson!

That one we backed up twice to do our own replays. Amazing pass especially when you consider the physical location of the three players.