Tom Keegan: Josh Jackson will find way to truly be ‘good at everything’

Manhattan — The play called for the ball to go to Josh Jackson in the post and it did, where two defenders quickly crowded him. Thinking and acting quickly, as is his way, Jackson whistled the ball to Sviatoslav Mykhailiuk for a wide-open 3 that he hit late to help Kansas score a 74-71 victory over Kansas State in a battle played in front of 12,528 rowdy witnesses.

“Biggest shot of the game,” Kansas coach Bill Self said of the Svi 3 that broke a tie with 2:34 left. Kansas led the rest of the way.

Jackson consistently does a nice job of finding Svi for open shots. 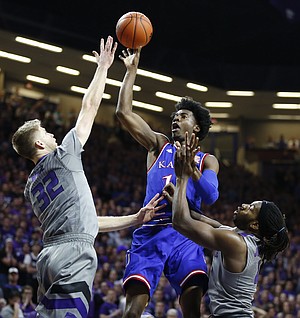 View a gallery of images from Monday night's game between the Jayhawks and Wildcats at Bramlage Coliseum.

Such as defending a variety of players, sometimes stripping the ball from them, other times stripping them of their confidence. Kansas State’s 6-foot-10 forward Dean Wade aggressively hunted shots when Svi was on him and finished the night with 20 points on 8-of-12 shooting from the field and 3-of-3 from beyond the arc. He looked so confident, except when Jackson switched onto him. He looked to dish when that happened.

Svi is almost accurate in saying Jackson is “really good at everything.” Even 3-point shooting now.

Self could have turned Jackson’s green light when open from 3-point range to a red one, but he didn’t. The coach nurtured the star’s confidence. Jackson rewarded him for doing so. He has made 13 of his past 24 3-pointers and there was no one on the planet who could have predicted that.

Jackson came out for the second half and buried two quick 3-pointers on his way to an 18-point, three-steal night.

“It’s all about confidence,” Jackson said. “I always knew I could shoot, I just needed confidence and now I have it.”

Except from the free-throw line, where he made just 2 of 5 Monday night. 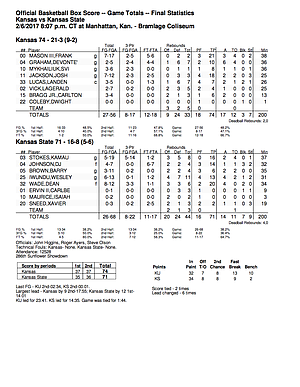 “I do need to get better at that,” Jackson said.

Jackson has made just 16 of his last 34 free throws, an ugly reality that could lead to teams employing a hack-a-Jackson strategy late in games.

Just as Self didn’t discourage Jackson from shooting open 3-pointers, he’s not going to bench him late in games. He can’t. Jackson does everything else so well that he can’t afford to put someone else on the floor for him.

And just as Jackson turned himself into a way better long-range shooter, he’ll figure out a way to make freebies.

Or is that a harder puzzle to solve?

“I don’t think it’s harder, but the one thing about shooting the ball from the perimeter, you don’t have time to think about it,” Self said. “Shooting free throws, you have 10 seconds to think about it. I thought tonight it was a little mental. But the thing about it, the one he made late was soft. I think he can make them. I think he will make them. We’re not going to take him out to avoid him getting fouled. He’s going to have to make them because the ball’s going to be in his hands in late-game situations.”

Jackson’s too good a scorer, too skilled a passer, for it not to be in his hands and it can’t be in his hands if he’s at the scorer’s table waiting to check back in to play defense.

Foul trouble is the other area on which Jackson needs to improve. He’s done a better job at checking his temper, his early season technicals fading in the rear-view mirror.

Staying out of foul trouble is not as easy a challenge for a player who defends so aggressively.

He picked up his fourth foul with 9:56 left, sat out for more than four minutes and checked back in with Kansas leading by a point.

“I was going to keep him out for as long as I could as long as we kept the lead,” Self said.

Excessive fouling will send Jackson to the bench and in fact limited him to 25 minutes in this one. Trouble shooting foul shots won’t. He has a soft touch, so there is a path to becoming a decent free-throw shooter before long. The smart money says he’ll figure it out quickly and that deficiency also will be in his rear-view mirror.

Baseline View: Jayhawks hold strong to finish off KSU in Manhattan by KUsports.com

Landen Lucas on win at K-State by KUsports.com 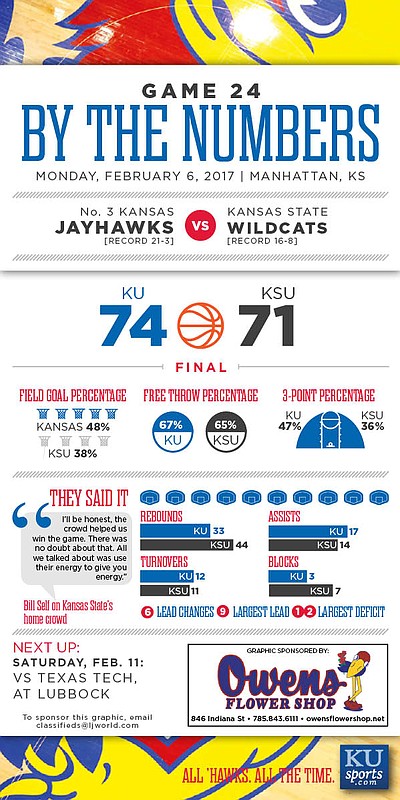 It wasnt just the poor free throw shooting. Jackson left shooters (HIS men) wide open on the perimeter in the first half and let them get threes. Wide open looks. The dumb fouls have been alluded to. He also has trouble with decision making at inopportune times, like trying a difficult thread-the-needle pass to Frank Mason on a fast break that had zero chance of being executed. Im not saying JJ isnt a great player. He is. Im not saying he wont deserve his spot being drafted very highly. He will. Im saying I dont see him through rose-colored glasses as a player who's polished in nearly every area of the game except free-throw shooting. JJ is a frustrating player to watch. He's frustrating because he's a freshman. Kid is phenomenal. Has mad game. But he's got a LOT of areas he needs to improve in.

Yes Jackson could tighten a few things up in his game but he's a high octane player that goes for a lot of plays. He only had 2 TOs vs KSU so we can live with those because we get so much net positives. His FTs and dumb fouls are the areas where he really needs to concentrate.

Here's the really cool thing. NBA teams have coaches who can teach that sort of stuff, especially with unlimited practice time and no college classes. He's a freshman. The NBA drafts talent and potential, not finished products. Next to Wilt and Manning, he's the most talented to play at KU.

If you don't think Jackson deserves to be a high draft pick you really should consider not posting your opinions in public.

No one said Jackson doesn't deserve to be a high draft pick Jay. Joe wrote "I'm not saying he won't deserve his spot being drafted very highly. He will." Your unnecessary negativity on this site is a constant downer.

That was pretty negative. Downer...

The posters on this site are definitely a box of chocolates.

More cluelessness. "Jackson left shooters (HIS men) wide open on the perimeter in the first half and let them get threes."

Only two KSU player made threes. Dean had 2 in the first half, TWO. One was a well run screen, one Jackson was thrown to the floor. Stokes had 3. Were they both Jackson's responsibility? Does he guard both at once? He wasn't on the floor for 1 of Stokes'... And no, he wasn't on Stokes on a switch on either play where he was actually on the floor.

he was playing in HS last year. he's come a long way since October. He's going to get a lot better before April.

Hey Josh, quit saying you need to get better at FT shooting and DO IT. Your bad FT shooting cost us dearly against Iowa State, and it may cost us again in the future. You need to spend an hour a day minimum doing nothing but practicing shooting FTs!

It's almost like I close my eyes when Josh shoots FT's. It's got to get better, right? Just practice, man, practice so it's like shooting a layup.

Josh is such a diverse talent, plus he brings a lot of grit to the floor, more so than Andrew Wiggins in my opinion. I agree that he will be the most impacting KU player in the pros, except of course for Wilt, Danny, and perhaps Paul Pierce. He should have a long and fruitful career.

As for the free throw shooting, if he has a mechanical problem, it will get solved either now or, as Jay says, in the pros. The key element is the mindset when going to the line. Not that they never miss, but in crunch time, Frank and Devonte are prime examples of wanting to go to the foul line. For Suzi's benefit, it's like the champion golfer who relishes the opportunity to make that testy three foot putt to win it all. It comes down simply to "some have it" and "some don't", and if you need a recent example, just say Tom Brady!

The Truth on Pierce. Drafted 10th in 1998. In retrospect, maybe Dirk was better. That's it.

just my opinion but if Embiid stays healthy he will be the most impacting KU player in the pros since Wilt. He, has a Steph Curry like ability to make it look like a video game with what he is able to do. I mean he goes from shooting 3's in transition to posting up or dunking on about anybody he wants to. Also, he rebounding, shot blocking and passing are amazing as well. If he stay healthy i think he will be better than AD.

if only jojo would not have been injured before the dance, him and twiggy could have taken us all the way....

Josh is the truth missing or making his free throws

I have a feeling that Josh is going to make those FT's when it counts. If not, I can live with the possibilities of that happening because his talent is just to good to be taken off the floor in crunch time.

Does Josh need polishing. Absolutely. The things that he needs work on will come with time and reps. But at least for the remaining time he has at KU, his will, passion and dog mentality more than makes up for his short comings.

Self's quote was telling. He's going to show the young man that he believes in him, with the hope that it builds confidence and ease at the line. My money is on Self and Jackson to figure this out before the season ends.

if you noticed on the last out of bounds Self had Jackson inbounding the ball. this is a good way to keep him on the floor but keep him off the line in the do or die final seconds.

You could be right, Rae, if Joel can stay healthy for the long term.

Good observation, Ben. I saw the same thing. Clearly, they wanted the ball coming in to someone who has demonstrated better free throw shooting. If someone else inbounded the ball, they would foul Josh before the pass is thrown in.

Reminds me a little of the Battle of New Orleans over 35 years ago between KU and Wichita State in the NCAA tournament. KU tried to sucker WSU into a charging foul on an inbounds play at the end of the game by setting up a blind screen and hoping that WSU would plow right through it. It worked to perfection as Darnell Valentine was bowled over. However, the refs didn't call it even though KU alerted them of the strategy in advance.

I love Josh he is scrappy, come up with a lot of loose balls, rebounds well, but he seems to have zero pride in stopping his defensive assignment. That's a big area where Wiggins was heads and hells better than Josh, Wigs would shut players down.