Fearless Frank Mason atop the ratings (and a table on press row) vs. Kansas State 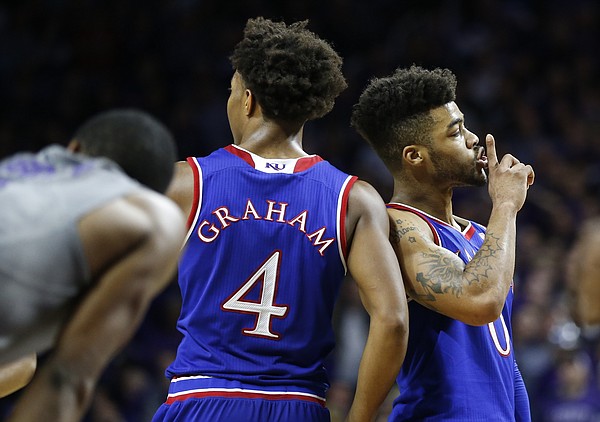 1 - Frank Mason: It’s not accurate to say that Mason competes for all 94 feet of the floor. That sells him short by about 20 feet. He had such a head of steam going to get back on defense after a Kansas turnover that he ended up in the second row of press row, on the floor. He got back up, jumped onto a table and used it to hurdle himself back on the floor and into the action, where he immediately picked up a steal. Classic Fearless Frank move. And oh yeah, almost forgot. He also scored 21 points.
2 - Josh Jackson: Picked up fourth foul with 9:56 left and was limited to 25 minutes on the night, time enough to contribute 18 points and three steals. He made a pair of 3-pointers early in the second half and has made 18 of his last 34 shots from long range. Next challenge: Improve from the line.
3 - Devonte’ Graham: Huge 3-pointer put Kansas up, 56-50 with nine-plus left. If he had not had four turnovers and had done something productive during those possessions, he might have flirted with a triple-double. Totaled 10 points, seven rebounds and six assists.
4 - Landen Lucas: Foul trouble limited him to 26 minutes, but he still totaled seven points, seven rebounds, two assists and two blocked shots.
5 - Svi Mykhailiuk: His 3-pointer broke a tie with 2:34 left and KU led the rest of the way. Is driving much more aggressively and playing under control. Made 2 of 3 3-pointers and contributed eight points. Struggled to contain Dean Wade when he was on him.
6 - Carlton Bragg: Hung tough down low and gave his team a terrific 13-minute boost, particularly in the first half. Scored all of his six points and both of his assists in the first half. If he continues to bring what he did in his return from a three-game suspension, he’ll be a big boost to the bench.
7 - Lagerald Vick: Made just 2 of 7 shots and missed both 3-pointers, but hung tough on the boards with five rebounds in 25 minutes.
8 - Dwight Coleby: Played one minute, blocked a shot and committed a foul.