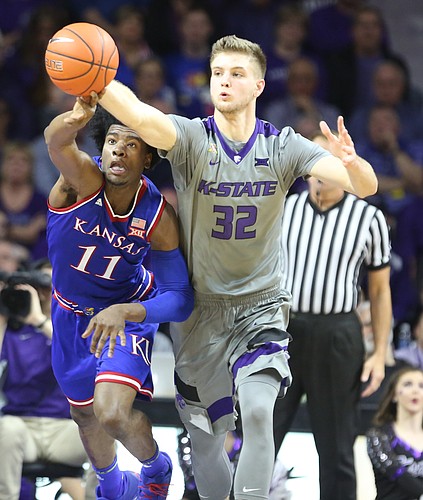 Kansas guard Josh Jackson (11) and Kansas State forward Dean Wade (32) compete for a ball during the second half, Monday, Feb. 6, 2017 at Bramlage Coliseum. by Nick Krug

The way this game was played for most of the night, it looked like it was destined to be one of those slugfests in the 50s or 60s. But KU got to 74 points, thanks largely to 47 percent 3-point shooting and the right guys going to the free throw line most of the night. Josh Jackson continues to struggle on the freebies, but KU was good everywhere else.

Carlton Bragg returned to the lineup and was a big factor and Landen Lucas (7 points, 7 rebounds) played a solid and easy-to-overlook game from start to finish. K-State’s DJ Johnson was the best big on the floor in the first meeting between these two, but not Monday night.

Frank Mason led with 21 points and a giant heart, Devonte’ Graham quietly flirted with a triple-double (10 points, 7 rebounds, 6 assists) and Josh Jackson finished with 18 points and teetered on the brink of taking the game over all night. In short, just another night for the ultra-talented KU backcourt.

Ten points, eight rebounds, three assists and a one block in 39 minutes. That’s the kind of production KU will gladly take from its bench every night, particularly if Bragg and his physical presence inside leading the way. Bragg finished with 6 points and 3 rebounds on 3-of-4 shooting from the floor and Lagerald Vick, who shot just 2-of-7 from the floor, delivered a huge dunk and grabbed five big rebounds.