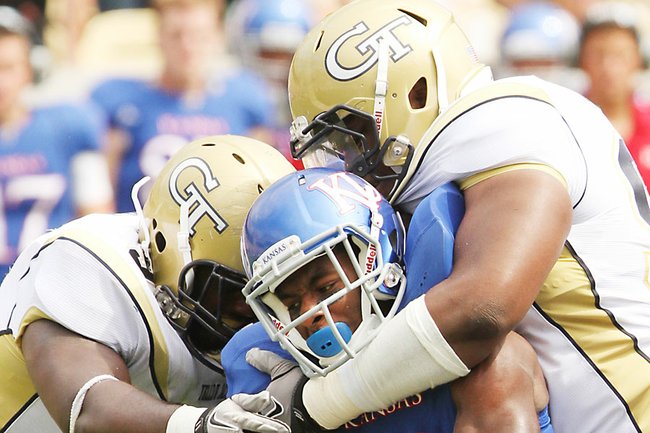 Kansas running back Tony Pierson is gobbled up by the Georgia Tech defense Saturday, Sept. 17, 2011 in Atlanta. 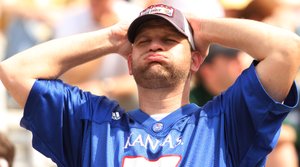 KU defensive coordinator: 'What happened today is on Vic Shealy'

Kansas defensive coordinator Vic Shealy took responsibility for the defensive performance in his team's 66-24 loss to Georgia Tech on Sept. 17, 2011.

Atlanta — Georgia Tech’s players made it clear following Saturday’s 66-24 victory over Kansas that this game had extra significance.

Last year, the Jayhawks defeated the Yellow Jackets, 28-25, in Lawrence.

“Coach (Paul) Johnson, one of his favorite quotes is, ‘Revenge is a great motivator for those who care,’” Georgia Tech linebacker Steven Sylvester said. “So we came out here and we cared today.”

The Yellow Jackets seemed especially miffed by certain comments made by KU’s players.

“We had to listen to them say it was easy last year and they had fun, this and that,” Georgia Tech A-back Embry Peeples said. “So this year, we wanted to show them that last year was a fluke and the fun that they had was not going to be had today.”

Other Georgia Tech players referenced a quote from KU linebacker Steven Johnson that was transcribed from the Jayhawks’ Tuesday press conference.

"I’m actually used to their offense, because that’s the offense we ran in high school, and it isn’t too complicated — you just really have to be sound in your assignments and technique,” Johnson said. “They still have a lot of great players out there, so we’ll still have to play the football game. You can’t take them lightly.”

A few Yellow Jackets took issue with their offense being referred to as simple.

“It’s easy to say the offense is easy when you win,” said A-back Orwin Smith, who had five carries for 157 yards and two catches for 108 yards with two scores. “They won last year, so you kind of expect guys to talk. I don’t really listen to things guys say, because you’re supposed to think positive.

“But our offense is not easy. I can say if I was on defense, I wouldn’t be able to stop it.”

Added quarterback Tevin Washington: “If it’s a high school offense, we just put up 700 yards. So, I mean, if it works at this level, it’ll work at any level, I think.”

On Friday night, defensive coordinator Al Groh made his players watch a video of all his team’s breakdowns against KU’s offense.

When the film ended, Groh set down the remote and walked out of the room without saying anything.

“We saw that as a challenge. We had been called out,” Sylvester said. “We had read in the paper all week about how excited they were and about how that was the most fun they had ever had on the football field last year.

The Yellow Jackets — who led 24-17 at halftime — scored touchdowns on their first six second-half possessions before running out the clock in their final drive.

No, what is really easy is guessing who is going to come on here and use sarcasm and ridicule.

I was at the game today: I think you have a pretty good football team. Your offense looked good in the first half. Your defense was not bad in the first half either. After Tech got going in the second half, Kansas did not have an answer for the stuff that Tech was doing on offense. Johnson has been around a long time and just schooled the KU coaching staff. Physically, Kansas is imposing and unless they just quit, they will win some games. If I was the defensive coach, I would not let the players watch the replay of this game, because you won't face another offense like this for awhile. On the bright side for Kansas, both KU and Ga. Tech are one for two in the last two seasons.

Thanks for the kind words. I was at the game too. Not that our defense was playing that well early, but after Tech scored early and often at the start of the second half, our D just flat out laid down and quit. I agree that our offense showed some promise. They just had to deal with getting momentum back after the D gave up such quick scores.

Unfortunately, they've already won all the games they will this year.

Totally unacceptable for our players to give any of our opponents bulletin board material!! Note to players, keep your mouth shut and let your play on the field do the talking.