Kansas receiver Daymond Patterson (15) hangs his head on the bench as time expires against North Dakota State, Saturday, Sept. 4, 2010 at Kivisto Field. At right is running back Angus Quigley (22) and receiver Bradley McDougald (24).

Highlights from the low-scoring game that was KU's 2010 season opener. North Dakota State won the contest 6-3.

Live updates from the Newell Post Live, coming to you from Memorial Stadium where the Kansas Jayhawks are taking on the North Dakota State Bison. 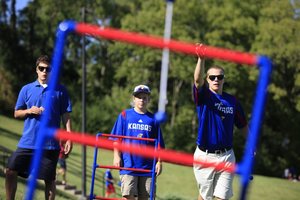 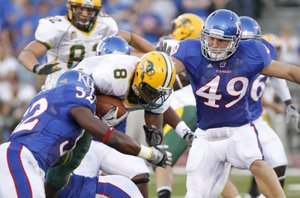 Rather than hopping out of the Anderson Family Football Complex and onto the field like they’ve done in the past, the Jayhawks walked out of the locker room and huddled up in a giant tunnel that sat at the southwest corner of the field.

The tunnel, 30 feet long with two, 20-foot-tall Jayhawks at the mouth, housed the entire team, which then ran through the tunnel and into another season of college football season as smoke guided the way.

The introduction played on the large video board — which also made its gameday debut — also was new, as it no longer featured the Jayhawk plane soaring over the plains and into Memorial Stadium and instead rolled through some highlights of past KU greats, like the introduction video shown at KU men’s basketball games.

In that one, the video of Mario Chalmers hitting the three-point shot to tie Memphis in the 2008 national title game always draws the loudest cheer. In this one, it seems as if the early favorite to become the football equivalent is the replay of Todd Reesing’s game-winning touchdown pass to Kerry Meier that beat Missouri in 2008 at Arrowhead Stadium in Kansas City, Mo., in the snow.

What are you doing here?

Speaking of Reesing, the former KU quarterback was on hand to cheer on his alma mater. So, too, was former running back Jake Sharp. Both former captains were spotted in the press box before the game.

The low scoring game was unusual for the Jayhawks in many ways. The three points scored by Kansas were the fewest since a 19-3 loss to Oklahoma on Oct. 15, 2005. The six points allowed also were the fewest given up by KU since a 6-3 loss to TCU on Sept. 22, 1962.

Kansas cornerback Chris Harris, a senior captain from Bixby, Okla., made his 30th career start, most among KU’s current players. Harris had four tackles — two solo — and was the only Jayhawk to record a sack, a huge, sweeping leg tackle on NDSU quarterback Jose Mohler late in the game that forced NDSU to punt and gave the ball back to the KU offense.

Kansas University coach Turner Gill and North Dakota State coach Craig Bohl both played their college ball at Nebraska. Bohl, who was a defensive back, played for the Huskers from 1977-79. Gill was an all-conference quarterback at NU from 1981-83. Gill and Bohl, who also coached together at Nebraska, reconnected before the game near midfield with a hug and lengthy chat while both teams warmed up.

Gill and Bohl visited briefly after the game, as well.

Actually the TCU game referenced was also a 6 to 3 loss.

Tait, did you attend a single KU home game last year? After last night's loss, pretty much all of us would like to forget the past 2 season. By the way, it's the same exact intro minus Mangino. Youtube is your friend; look at last year's.