Other guy’s debut not so storybook

A Kansas fan shows off a sign in the Allen Fieldhouse stands as the Jayhawks faced USC on Saturday, Dec. 18, 2010.

Sudden impact: Selby lives up to hype in debut

Kansas defeated USC, 70-68 on Saturday, Dec. 18, 2010 at Allen Fieldhouse. Freshman Josh Selby scored a game-high 21 points in his debut, including a three pointer with 24 seconds left in the game to give KU win. 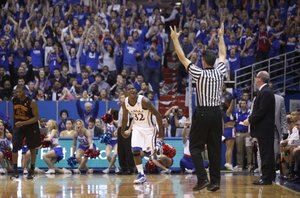 One, KU freshman Josh Selby, drew non-stop adoration from the raucous home crowd and led the Jayhawks to a 70-68 victory against Southern Cal. In 27 minutes, Selby scored 21 points, including a late three-pointer that proved to be the game-winner.

The other, USC guard Jio Fontan, a junior and former high school teammate of KU’s Tyshawn Taylor, was left to speak about falling short in his first game with the Trojans after transferring from Fordham.

Both players had good days, flashed serious skills on the offensive end and were responsible for a good chunk of their team’s offenses.

In the end, Fontan needed only a few words to compare and contrast the openers.

That three-pointer — one of five from Selby — came with 26 seconds remaining and put KU ahead by one. From there, the focus shifted to Fontan, who, with 6.2 seconds remaining and USC trailing by one, took an inbounds pass in front of the USC bench but was hounded so closely by KU’s Brady Morningstar that he stepped out of bounds and turned the ball over.

Perhaps the most telling sign of just how much Fontan means to the Trojans was that USC coach Kevin O’Neill called Fontan’s number in that final sequence.

“It had many different options,” Fontan said of the play. “But we were trying to get me the ball. I’ve just gotta do a better job of getting open and getting my feet in bounds.”

Though the costly miscue was the one that stuck with him, Fontan had more good moments than bad. In 35 minutes, he finished with 15 points and two assists on 4-of-9 shooting. He added five turnovers, but also earned the respect of KU coach Bill Self.

In turn, Selby earned praise from Fontan, who said he thought he had played against the KU freshman in the past but could not remember. Regardless, Fontan and the rest of the Trojans knew they’d have to hold Selby down if they wanted to win.

“When you’re an All-American and you’re the No. 1 player in the country, obviously you’re gonna be a focus,” Fontan said. “We were aware that he could score the ball. He came in hyped up to be a one-and-done kind of guy, and he lived up to it today. He played really well, and I tip my hat off to him.”

Fontan said the experience was one he’d remember for a while.

This Fontan kid sounds like a pretty good guy. I tip my hat to him for saying all the right things after the game. USC will be a good team with this guy in the lineup. Now go win the Pac 10.

He looked like he was trying too hard, feeling the pressure of his coach's unreasonably high (and public) expectations.

I can't recall another big-time coach pile that much pressure on to a player. It was really strange hearing McNeill talk about him in that way...I'm sure he's a very good player, but he made it sound like the kid is one of a kind - even if he is, I'd expect the coach to deflect some of the pressure instead of promoting it.

Nice comments from Fontan. Thanks!