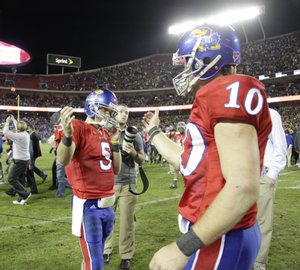 Kansas City, Mo. — Many Kansas University fans might have wondered why KU didn’t elect to run the ball on first down of its final offensive possession against Missouri.

It turns out the Jayhawks did have a running play called; they just audibled out of it at the last second. Kansas suffered a safety on that possession and went on to lose to the Tigers, 41-39, on a last-second field goal.

With 2:59 remaining, KU took over possession at its own three-yard line leading 39-36.

KU right tackle Brad Thorson admitted afterward that the Jayhawks’ original call was a run, but that KU offensive coordinator Ed Warinner changed the play after the Jayhawks looked to the sideline.

“We checked out of a run. We definitely saw something,” Thorson said. “Our offensive coordinator, he’s spot-on. He knows what the defense is doing, and we took a couple shots.”

Instead of running the ball, KU quarterback Todd Reesing overthrew Dezmon Briscoe on a deep route down the sideline for an incompletion.

“We had confidence we could run the ball and get a good dent in them,” Thorson said. “I think coach Warinner saw something, and it was just too good to pass up.”

Following an incomplete pass on second down, Reesing failed to get out of the end zone on a third-down QB draw and was tackled for a safety.

Those two points ended up being the difference.

“In my mind-set, I just thought we’d run the ball, get what we could get, run some clock, make them use their timeouts,” Briscoe said. “But the coaches thought different, so I can’t argue. I’m just a player. I just go out there and run what they tell me to.”

“It made the difference in the game,” Kansas coach Mark Mangino said of Missouri’s punting game.

Kansas senior receiver Kerry Meier’s 14 receiving yards on the Jayhawks’ first drive moved him past Willie Vaughn (2,266) into second place on the KU career receiving yardage list. Meier finished with 10 catches for 54 yards to finish his career with 226 catches — a KU record — and 2,309 yards receiving.

His two touchdown catches Saturday gave him 18 for his career, second behind Briscoe’s 31 on the KU list. He also broke his own school record of 97 receptions in a season, finishing with 102.

Perhaps inspired by Missouri’s new black and gray “Beast Mode” uniforms, the Jayhawks unveiled a wardrobe alteration of their own Saturday, wearing crimson jerseys with blue pants for the first time this season.

The team’s helmets also featured the Jayhawks logo, a change from the “KU” usually depicted.

I liked the new uniforms. I just hope they stay away from the gray pants in the future. Second guessing the play calling in the end isn't right. Criticizing our non-existent defense is more appropriate. It was like 11 Lori Williams out there.

I liked the new uniform myself! I agree with the rest... play-calling was the difference at the end.

last series of plays we were out coached. Pinkle knew the clock was his enemy.

In golf you have sucker pins. Flags that are placed in very difficult corners of the green, most golfers take the safe center of the green, not aim at the flags that are in the corner, next to water, hill, trap etc. that is why they are called, 'sucker' pins. On occasion, when you are behing the leaders and have to make up strokes, (points) you will be forced to fire at sucker pins.

On the other hand, when you are in the lead, and have fewer and fewer holes for the compeition to catch up with you, (similar to running clock under 3 minutes) then you don't have to go for the sucker pins, or throw the ball.

Pinkle showed us a defense that would 'double dog dare' us to throw the ball we had the lead and took his bait.

Mark what were your instructions to the offense and offense staff at 2:49, advance the ball and run clock or fire at sucker pins?

well, it's good to finally see some admission on whose fault it was that we called that first pass play.

Ed Warriner has done a good job with the offense overall the last few years...but that may have been his worst moment. We had the lead and the football with three minutes left in the game. Unless a receiver was uncovered, the ONLY play there was to run the ball. that little pitch play had worked before with Sharp...why not run that with Rell?

tell him before the series, to stay inbounds no matter what. that's what coaching is....direction near the end of the game, to give your team the best chance to win.

the clock was Moo's enemy...and the way we had been moving the ball....even with our bubble screens and sideline screens....we would have picked up a first down

that play calling was just the essence of this season gone bad. snatching defeat from the jaws of victory.

on the unis: would rather have had the blue tops...but that Jayhawk on the helmet was cool. that should definitely stay.

The uniforms - - I would like to see a mean Jayhawk head on the the helmet. Get a graphic artist to come up with a Jayhawk that is on the attack! Forget the rest of the bird and make that angry head bigger.

The first words out of the mouth of the young commentator on National TV following athe game were:"I question the play calling of the KU coach on the last series>"I asked my high school coach "What would you have called.? He said "first of all, I would not have called a high risk long pass to Briscoe on first down" I would have gone to the tight end or one of the other receivers" "I would not have come back to Briscoe on second down as they were watching him all the way. Go to one of the other receivers on the first and second downs and probably pick up a first down. You would have completwed one of those two passes and had a little room to either throw or run the ball on third down. "This play calling cost us the game.!!

Go out on the field and line up under center with confidence and quickly snap the ball and pound it up the middle. Play like you know you can win the game. The offense looks shaky and scared all year with the old "look to the sideline 6 times and point at every defender" routine. That was the worst play call decision I can remember, and that loss cost Ed Warriner his job as he will be long gone right behind MM.

Thought the uniforms were horrible. Looked like clown costumes. Go with tradition.

I know most have criticized Mangino for not running on the last series but is there an argument for his strategy? Our defense fell apart in the second half. We were unable to establish a run. Throwing the ball is utilizing your strongest skill. Trying to win the game instead of trying to keep from losing.

No argument for his strategy because we lost the game. If we ran the ball three times MU would have had only a minute to get down the field and kick a field goal for a tie. And you should always have confidence in your defense, they did just stop MU on the drive before.

Yeah, maybe they were a little clownish. I liked the red jerseys, though. Seemed to help Reesing find his receivers.

Go with tradition??? You mean the uniform we have worn for the last 2 years or one of the other 15 versions we have worn in the past 20 years? We have no football tradition whatsoever. I personally liked the uniforms, but I agree with putting the 1941 Jayhawk on the helmet.

All the concern over the uniforms??? What about the talent packed into the uniforms?Let me just say the red jerseys look great...as far as the rest of the uniform, I didn't care...I was there to watch football!! More important things to observe then the uniforms!! Reesing did manage to find his receivers, who really make him look fantastic when he connects!! Why is it that the QB gets all the glory for pass completions? Reesing's receivers have worked their butts off the last 7 weeks trying to make receptions! They are the ones, if they can catch one of his passes, move it on down the field. Let's give them some credit!! After all Reesing is the one who got sacked in the end zone for a safety....had that not happened Mizzou would have needed a TD to win!! We definately needed Opurum for those runs up the middle! Yes, this was the year that the Jayhawks should have had it all! I feel so bad for those seniors who put their hearts and souls into the games....Kerry Meier, you are the ultimate football player...you unselfishly have used your talent whereever needed to the betterment of the team!! Best of luck in the NFL!!