Kansas guard Sherron Collins and Central Arkansas forward Tadre Sheppard slide across the floor for a loose ball during the second half, Thursday, Nov. 19, 2009 at Allen Fieldhouse. 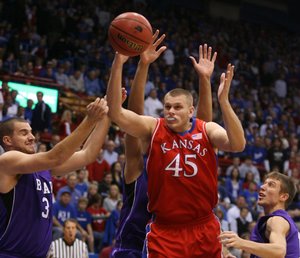 Sherron Collins sprained his right ankle early in the second half.

“It was painful. I thought I hurt it worse than I did. I got up, and it felt a lot better. I’m fine,” said Collins, who left for the trainer’s room and a few minutes later re-entered the game.

He finished with 12 points, three assists and three steals in 25 minutes.

Marcus Morris started in place of his brother, Markieff, who had started KU’s two exhibition and regular-season games.

“To me, it gave us a chance to play Thomas (Robinson) more if Marcus started because in the first half we subbed him, but when Marcus came back in he played on the perimeter,” Kansas coach Bill Self said of Marcus, who started at power forward, then switched to small forward, with Robinson playing power forward. “I thought it’d be better for our group to get Thomas more minutes. I don’t know if we’ll stick with it. We’ll wait and see how it plays out. I could care less who starts. You guys (media) think it’s important. I could care less.”

Tyshawn Taylor had no turnovers after suffering seven against Memphis. … KU wore red uniforms for the first time since Dec. 30 of last season versus Albany. … KU extended its homecourt win streak to 43 games. … KU outscored the Bears, 23-0, during a 12-minute span in the first half. During that stretch, Central Arkansas missed 15 straight shots. … UCA scored 15 points the first half, the lowest total by a KU foe in one half since Florida Gulf Coast’s 13 in the opening half on Nov. 16, 2008. … The 50-point margin of victory was largest since a 51-point win over Dartmouth on Nov. 28, 2007. … UCA hit 25.5 percent of its shots. KU has held 77 straight foes under 50 percent. It was the lowest percentage by a foe since Dartmouth in that 2007 game. … KU’s 87.5 three-point percentage (7-for-8 in second half) is the team’s best since making seven of eight against Texas on Jan. 10, 1998. … Chase Buford scored a career-high four points. … KU’s seven turnovers were fewest since it had seven versus Texas A&M on March 8, 2008. … Cole Aldrich had four blocks and Robinson three. … UCA’s 7.1 percent three-point shooting (1-14) was lowest by a foe since Albany went 0-for-15 on Dec. 30, 2008.

In the second half, Robinson tried a spectacular one-handed slam in which he took off several strides from the goal, but was fouled.

“I tried to put one down. He (UCA player) grabbed me,” Robinson said.

Can he dunk from the free-throw line?

Regardless of the opponent, the Morris twins looked great last night. I see two totally different players than last year. Marcus has a nose for the basket. There's something about their demeanor that's totally changed their confidence level. I love it!

Thomas Robinson showed his true colors last night. He really is an amazing rebounder. Now we just need to polish his offensive game.

I'm still not high on Tyshawn Taylor. I hope he comes out of his funk.

How could TyShawn have no turnovers?!? The very first turnover was his fault. He's under the basket and passes the ball to Cole's ankles as he cuts down the middle of the lane. The ball went off of Cole, but it was TyShawn's horrible pass that caused it (or is my memory just bad and that was someone else?)

Could not agree more about the Morris twins. They are playing a lot more aggressively than last year. They are going strong to the basket, and aren't letting anyone push them around. Very refreshing.

No Joel, you're right. That should have been a TO on Tyshawn but I guess since Cole bobbled it they put it on him. The way that pass was delivered, Cole only has a chance about 10% of the time. Tyshawn will put it together soon.. I hope. He will be a key part this season.

tulsa, I agree - it's just November and Bill's teams always look much better 2nd semester - I'm sure TT will get it together soon. Although the TO probably went to Cole in the books, I am quite sure that TT will get an earful from the coaching staff for that horrible pass on the very first possession - it's the first bad play of the game - you can't miss it during film.

I know this a KU chat board, but I can't help but make this comment about Kentucky....

Did anyone notice that not only did Kentucky ONLY win by 10 last night, but they didn't get 1 single point from their bench. All the scoring was done by their starting 5. Is Kentucky really THAT deep? I actually think it's frightening.

I bet Orton is upset about his decision now.

Taylor will have to get it together or he will be on the bench. This team is too deep to have him out there hurting them. They can just replace him, simple as that.

It was good to see CJ out there last night as well. Looks like he is coming along...if he can stay healthy he will be in the mix for minutes as well. Those were two DEEP 3s he hit last night...

Right now I'd start Tyrel over Tyshawn. Reed obviously isn't going to make the highlight real play but he's steady and doesn't make mistakes, which is what this team needs right now. Plus he's a way better shooter than Taylor will ever be.

I liked what I saw out of CJ, being his first action in a few years. He could easily take some of Tyshawn's minutes as well.

I guess I get the feeling that Tyshawn started hearing the hype this summer about himself and the league and is maybe trying to live up to it. He needs to realize they started talking about him because of what he did last year and for that U19 team, which was lead/distribute/take care of ball/score when the opportunity presents itself.

He's playing like it's the playground and 1 highlight play makes up for 3-4 bad decisions.

Tyshawn is more athletic than Tyrel, I would keep Tyshawn in ALL the time. He may make some mistakes at times but he can get the the rim when he wants to. Tyrel only takes outside shots and when those shots don't go down he does not contribute. I am most impresed with the Morris twins. They have improved immensley over last year. Also CJ looked good for not having played in a while. We go 10 deep, with talent to spare. It's going to be an exciting year.

Gary, when are you gointg to start "ranking" the players like you did last season? 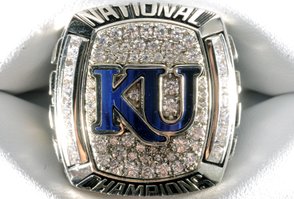 oljhwk says... Gary, when are you gointg to start "ranking" the players like you did last season?

Keegan has been ranking the players all year. This link: http://www2.kusports.com/weblogs/keeg... is off to the side of the BB page, and contains links rankings to the other games.

i think you guys underestimate tyshawn. he obviously isn't playing up to his potential right now but he had a decent game. he adds an offensive dynamic that is different than x, sherron and cole. he can really get to the rim and is excellent on the perimeter defensively