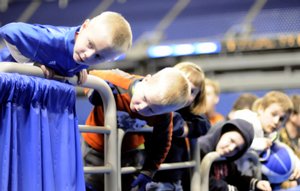 Three-year-old Jayhawk fan and Minneapolis native Tyler Nystrom, left, leans over the railing with other young basketball fans to spot the Jayhawks as they take the court for practice on Thursday at the Metrodome.

“He’s crafty, a good three-point shooter,” Collins said. “He knows how to use screens real well. It will be a tough matchup, but I think playing against a lot of great guards all season has prepared me for it.”

“He would be the type of guy that every coach would want on his team,” Self said. “He’s very unselfish for a guy that averages 23 points. He has different gears. He does a terrific job at playing at three or four different speeds. He keeps his defender off balance.”

N.D. State coach Saul Phillips said Collins actually “reminds me of Woodside. They do have similar games in a lot of ways. It’s been a real thrill watching Kansas tape to watch him (Collins) evolve and take control of this team. He is the leader. You see that on tape.”

KU’s Cole Aldrich was asked if N.D. State resembled any team the Jayhawks have faced this season.

“Missouri,” he said. “They kind of run the same motion. They are not quite so large all around as a team, but they are really good. You take a good, hard-nosed Missouri team and you take the North Dakota State team and you know they will be really good.”

Self also said the Bison remind him of Texas Tech, a team that burned KU from beyond the three-point arc.

“They run the best motion of anybody we’ve played all year. They are a hard team to scout because their movement is dictated by what the defense does as opposed to what they have pre-set in their head to do,” Self said. “That’s much harder to do with a young team than a veteran team like theirs (four fifth-year senior starters).”

Self was asked if he agreed with Duke’s Mike Krzyzewski that President Barack Obama should be more focused on the nation’s economy than filling out NCAA Tournament brackets.

“I think everybody needs a little release now and then. I think it’s OK for our president to spend five or seven minutes of his day getting away from all the things he has to deal with daily because I am sure his plate is more full than any of us could imagine,” Self said.

Obama picked KU to lose in the Sweet 16.

“I’m not disappointed at all,” Self said. “Last year we may have been a little bit of ‘flavor of the tournament’ type of pick because we had so many returning guys and so many obviously talented guys.

“We’re a little bit unknown ourselves. We have a good seed in being a 3 (to N.D. State’s 14), but there is still some unknown out there about us because we are so young.”

Self on playing in the spacious Metrodome, which is configured to seat 32,000 fans:

The Bison have not played in any huge domes this season.

“The original plan was to have our guys go out to a park outside where there is no background, but you can freeze your hands off this time of year in Fargo doing that, so we decided not to,” Phillips joked. “I go back to when I was a kid. I shot outside all the time. There’s a breeze outside, just like the Metrodome when you open up the door. That’s good. There’s nothing — even the Fargo Dome doesn’t begin to simulate the space behind the basket here.”

Rust may be evident

Self was asked if the Jayhawks might be rusty having not played since last Thursday.

“I guess there’s a chance, but a chance North Dakota State could be rusty too. They played last Tuesday (vs. Oakland). We played last Thursday (vs. Baylor). So we have that going for us. They will be rustier than us,” he cracked.

“When we found out the game times this week, we’ve gotten up and eaten early breakfast as a group and practiced about the same time as game time, so that’s about the only thing that’s different.”

Lots of Bison on hand at Metrodome

It’s not known how many KU fans will make the drive from Lawrence and surrounding areas.

“It’s hard to imagine us having 20,000 fans here. With the home games, we draw about 4,000 to 5,000,” N.D. State’s Lucas Moormann said. “But I think the state is definitely behind us. It’s kind of the one team they have in the state, there are no pro teams or anything like that. So this is the one team they are always watching.”

“I got a lot of e-mails this past week saying, ‘Good luck,’ and, ‘We’ll be there supporting you,’’’ said Bison player Brett Winkelman, who hails from Morris, Minn. “Some of my friends from high school and around the community I haven’t seen for four or five years are excited about it and will come down and support us.”

Kansas coaches didn’t have plans to let Jayhawk players dunk for the fans in practice because of what happened at last year’s Final Four when Rodrick Stewart suffered a season-ending knee injury when he went up for a dunk to try and please the fans.

However, walk-on Jordan Juenemann threw one down on Thursday in drills to the delight of the Metrodome fans onhand.

Juenemann dunking...what could be more thrilling than seeing that? Watching paint dry maybe?

Getting up early make you grumpy, mpann?

Wow President Barack is getting crap cause he filled out his bracket, which probably took 5 minutes and he probably did it while taking a number 2 in the restroom. Coach K is such a clown. He's just pissed he picked UNC

Lance Stephenson has made his decision. He'll announce it on April 1st. He said he chose the team with talent, a good coach and has an opportunity to win the championship. If you put the pieces together, he's going to KANSAS!

TheTruth08 - that's the same conclusion I drew as well. Man... we are gonna be freakin unstoppable !!