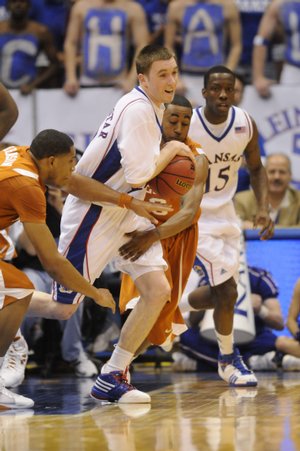 Hold on a minute. A closer look at the preseason basketball mags reveals Oklahoma and Texas were supposed to contend for the conference title, and the last prominent mention of a Morningstar playing for Kansas came more than 30 years ago, first name Roger.

That’s why they play the games, to see where the bouncing ball takes teams. In many ways, Morningstar is the perfect symbol for coach Bill Self’s sixth Kansas team, which didn’t return a single starter and returned one player (Sherron Collins) who played more than four minutes in the 45-minute national title game.

Not much was expected of a team so young, even less of a player so unheralded. Yet, there they were, the young Jayhawks and their oldest player, winning an outright Big 12 title with an 83-73 victory in a game they trailed by 14 points late in the first half.

Morningstar scored nine points to go with four rebounds, four assists and a steal. His most important work came defensively. Texas guard A.J. Abrams entered the game with a team-best 16.9 points per game and was shooting .395 from three-point range. Morningstar quietly stayed in his face the entire game. Abrams made two of 11 field-goal attempts and one of six three-pointers.

“To me, the player of the game for us was Brady Morningstar, without question,” Kansas coach Bill Self said. “He hasn’t been guarding the way that I think he was guarding earlier, but I thought he did a fabulous job on A.J., just fabulous.”

Winning coaches know how to put players in positions where they’ll succeed. When Morningstar guards a prolific perimeter scorer, Self often tells him not to worry about helping off the shooter. At the other end, Morningstar’s primary responsibility is shooting threes when Collins collapses the defense and fires a pass to him. Morningstar has hit 45 percent from long range, including three of four against Texas. His first two came within a span of 20 seconds in the first half and turned an 11-9 deficit into a 15-11 lead. His third was the biggest shot of the game. It gave KU its biggest lead to that point, 76-71, with 3:25 left. Texas never drew closer.

Watching Morningstar break a three-game slump in which he made two of 15 shots, one of 10 three-pointers and was torched defensively, recalled a quote from Syracuse coach Jim Boeheim about Andy Rautins, son of former Syracuse great Leo Rautins. Andy Rautins played high school ball in Syracuse, and when he signed with the Orange, 95 percent of the respondents to a poll said that he would not make an impact at Syracuse and would transfer to a smaller basketball program. Boeheim’s reaction: “We don’t waste scholarships on kids who can’t play. Anyone who thinks otherwise is an idiot.”

Good job, Keeg. I actually really like the Rautins reference at the end, even though your editor probably asked you to cut it. They are both high-IQ basketball players who make those around them better and "affect the win".

No matter what you may think about Boeheim, he tells it like it is. I know many Jayhawks were wondering if Brady was worth a schollie. I always thought he was, but I NEVER dreamed he would be as integral a part of this team as he is now. I'm so proud of the effort he has put in to replace so much of what we lost last year. He look at the void left by our seniors and early entry draftees, and said, "why not me?"

I agree Crooner. I am amazed at how well he defends for his height. If Self feels a kid is able to play, then he I figure we should trust Self's judgement.

I've been real big on Morningstar since the beginning of the year, and not so big on Reed.. I'm coming around on Reed.. Morningstar needs to rest, a bit and this team is going to be ok;.. Rockem Hawks!!1

I would say, off hand, that Boeheim and Self know a little bit about basketball. Oh, well, maybe a lot more than a little bit.

Looks like Abrams is trying to cop a feel on Brady.

Where's WilburNether from yesterday to tell us again that "only the most obtuse observer" would consider Brady a lock-down defender. Geez, have one bad game.

How many will truthfully admit they doubted how far this team could go with Brady Morningstar starting? How many will truthfully admit they believed it a matter of time before someone took over his starting spot relegating him to role duty? My hand is up. Well, it has been said many times this year that Sherron is a stud. Well, guess what, you don't look the part, but Brady, you are a stud, too. Behind that mild mannered face is the mind and heart of a serious competitor with much underrated talent. I don't care what A. J. Abrams says, he was seeing Brady's sweet face in his sleep last night.

Nice article, Mr. Keegan. And, crooner, I could be wrong, but I believe Keegan is the editor.

Brady's had a great year. I hope he can keep up that intensity on both ends of the floor for the next few weeks.........

I can't say enough about how well Brady has played this year. What an impact! It's great to see a hard working local kid have such great success at KU.

Morningstar was covered up by Robinson, Chalmers and Collins last year. Cole was in a similar situation but was good enough last year to get more pt. His mild demeanor, fight and attention to task tells me he made some great gains behind the starters last year and in the off season so he would have a fighting chance against the new talent coming in. I am extemely impressed with Morningstar and his play. Who knows where his ceiling is.

i thought Morningstar was covered up by a big red shirt last year...but he has been most impressive this year, and i couldn't be happier for him.

thank you eastTX, a minor red detail i missed.

I was at Lawrence Free State this past weekend watching my girlfriends former high school play in sub-state. After the game I looked up at their school basketball records. And who holds the single season and career records for steals? None other than Brady. Not surprising after what I have seen from him this year.

Brady's three point shooting is getting even BETTER!

And who knew Marcus Morris was our long range bomber in waiting?

I have wanted KU to have a trey shooting big for years. Come on, Marcus, practice the trey over the summer. You can do it.