Here's this week's final installment in our summer series that examines the Jayhawks who stand to have the biggest impact for KU football this fall. Check back beginning Monday for Nos. 10-6. 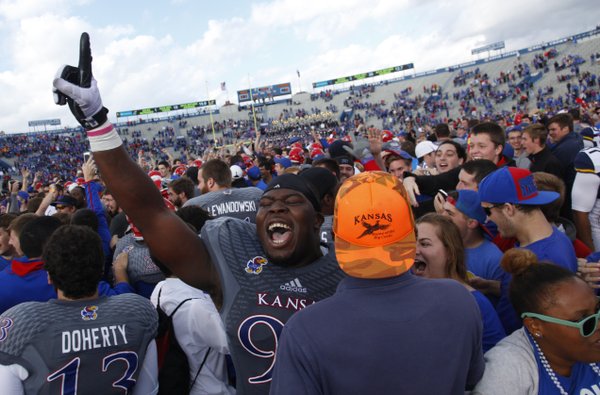 Kansas defensive lineman Keon Stowers celebrates with the fans on the field following the Jayhawks' 31-19 win over West Virginia on Saturday, Nov. 16, 2013 at Memorial Stadium. by Nick Krug

He brings all he has every day in practice and in the weight room and does it with the sort of enthusiasm that he brings teammates along with him. He very badly wants to win and this is his last chance to do so as a college football player. He has the confidence and desire to hold teammates accountable and isn’t afraid to speak up when he sees a teammate slacking. He played high school football for a powerhouse in Rock Hill, S.C. and has no taste for losing.

Beyond his intangibles, which are many, Stowers has the most tangible strengths of any of KU’s defensive linemen. He’s 300-plus pounds and the more he adds weight from year to year, the more sculpted he looks as his conditioning gets better and better and better. His size and explosiveness make him a legitimate NFL prospect.

Stowers’ highly charged determination never was more evident than when he intercepted a pass against South Dakota and turned into a massive running back, cutting through traffic and making it all the way to the end zone for an apparent 42-yard touchdown. A penalty turned it into a 10-yard return, but didn’t remove the mark that return left on everyone who saw it. The guy plays with a ton of fire. Stowers also had two forced fumbles and a fumble recovery.

A nice guy with an outgoing, friendly personality, Stowers plays football with a very nasty edge. He was one of the team’s four captains a year ago and took the responsibility very seriously. He’s headed for a big senior year.

Not that I promote losing in any way shape or fashion.

But reading this storyline on Keon Stowers and the statement made about playing his football at Power House Rock Hill High School in South Carolina, I tend to think that his tenure at Kansas will make him a better prepared individual for all of his future endeavors. He had a great taste of success in his early sporting career. Now, he's had a true taste of what it feels like to be on the other side of the sporting spectrum.

I look forward to this 2014 Jayhawk football season with much anticipation (as I do every season).

Hopefully, this season will truly be the turning season for all of Jayhawk Football Nation.

How many sacks did Stowers have last year ?

Honestly I don't know, but I'm guessing it wasn't very many, based on the fact that our team didn't have very many.

Our D-line has been the single most destructive position group since Mangino was forced out. Based on personnel and no changes in D-line coach, I don't see it improving this year either.

This defense was MUCH improved from the previous years. My main beef is with the Secondary coverage in the red zone, but I digress. One of the things that I see as a must, is the offense needs to have longer sustaining drives. As improved as the defense was, they were out on the field for way too long and way too many times. They were gassed halfway through the 3rd quarter. If the offense improves under the new OC, we might turn the tide on some of those games next year. The thing is....this program is close, just need all the pieces to fall in place. Got my tickets, ready for Saturdays, Rock Chalk!