Saturday night, following his team's 90-84, overtime loss to Kansas during his first crack as a head coach inside Allen Fieldhouse, Kentucky coach John Calipari opened by dropping phrases like, “I'm sick to my stomach,” and “I'm still hacked off that we lost,” and then shared a story about a pre-game conversation that came eerily close to coming true.

“It was funny,” Calipari began. “I talked to a friend of mine, who's a big Kansas fan, and he says, 'I wish you well and I hope you lose by one.' And I said, 'I hope we win on a half-court bank shot by one.' And that thing almost went in. I know he was up there saying, 'Oh my gosh. It almost happened.’”

That thing, of course, was Kansas guard Frank Mason III’s half-court heave at the end of regulation, which hit off the back iron and nearly ended the game.

“I did,” said Calipari when asked if he thought the shot was going in. “I looked and said, 'You gotta be kidding me.'”

Both Calipari and Kansas coach Bill Self said that given all of the hype, excitement, intensity and effort that accompanied Saturday's game, to end it that way would have been criminal. 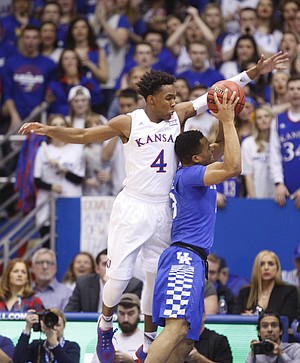 KU (17-4) outscored UK (16-5) 14-8 in the extra five minutes, and, if nothing else, that gave Calipari a little more time to soak up his return to place for which he has great fondness.

“I love the place,” he said. “I love the campus. If you're a college student and you're in the midwest, really anywhere, this is a college campus, a college life, a student life. And the pride they take in this basketball program; Bill's taken it to another level, but it's always been here.”

Said Kentucky big man Alex Poythress: “Oh, it was crazy. Loudest atmosphere I've ever been in.”

Calipari was happy to answer questions about KU's triangle-and-two defense frustrating his offense and find explanations for why his young Wildcats don't quite know how to win games like this yet. But he spent just as much time talking about the similarities between the two programs in a historical sense and clearly seemed thrilled to have been a part of a game like this, even if it was a loss. 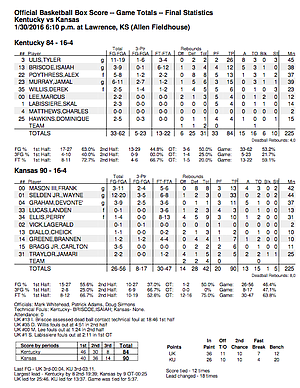 There were half a dozen different reasons why Saturday's marquee showdown was less than stellar. KU missed free throws at an alarming rate. Kentucky turned it over at key times, unforced errors that cost them dearly. Both teams featured players who were ice cold and others who were red hot.

But none of that kept Calipari from calling Saturday's clash anything other than “a heck of a college game.” And the former KU graduate assistant, who kick-started his career in this very venue more than 30 years ago, said the basketball environment around Lawrence, inside Allen Fieldhouse and across the KU campus was part of what makes college basketball so great.

“The programs are so similar,” Calipari said of KU and UK. “At Kentucky, if we beat the (Los Angeles) Lakers at the buzzer, from half court, banked it, they would never (rush the court). These fans are the same.

“They treated all of our fans (with respect). I mean, you had some people, 'You bum,' you know. 'We're glad you're here, but you're gonna lose,' you know. But they were respectful. It's what this is about. It's just a great environment to coach in, to play in and Kentucky is very similar.” 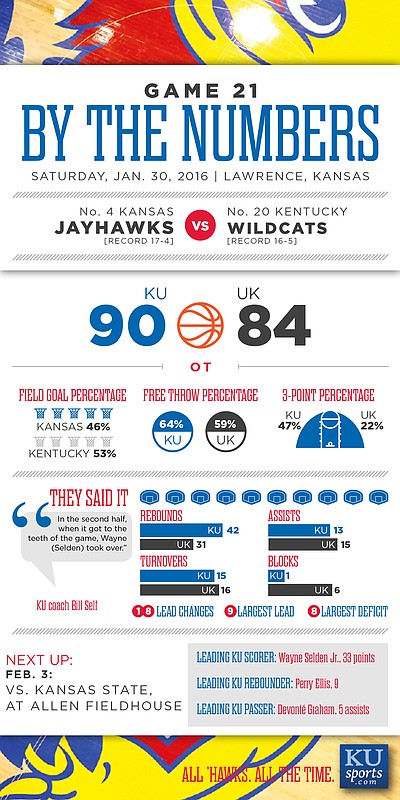 Calipari started his career at Kansas, eh? Well, every barrel has its bad apples from time to time.

And Adolph Rupp, for whom Kentucky's arena is named, played his college basketball at Kansas.

Respect to Calipari for showing respect to KU.

Thought there were way too many anti-UK signs in the crowd.

Considering it's Coach Cal, and considering how we got our feathers plucked off of us one by one last year, I think the anti-UK signs were quite justified.

Dean Smith, played at Kansas...North Carolina even has a deep Kansas connection with Dean and Roy now

Cal's comments were so kind it's almost hard to despise him. In true Cal form there was one small lie. In bridging "Our fans are so similar" and discussing how respectful Kansas fans were, he insinuated that Kentucky fans are similarly cordial. Anyone who's been to Rupp in opposing team colors knows better.

When I was a grad school student in Louisville, a friend of mine who's a die-hard UK fan took me to Rupp Arena for a game between UK and Robert Morris (rematch of NIT loss). Fans were as wild as at Allen Fieldhouse, but the fans I met were not at all rude, crude or discourteous - even though I showed up with a bright red Robert Morris t-shirt. :) The UK fans I know from my grad school days were anything but the freaks and d-bags you see on Twitter or on message boards.

Five UK players foul out......Cal had little alternative but to be humble in this loss.

I've never really understood the Calipari venom around here. He's always been totally complimentary about KU and sentimental about his years here. The stuff he said last week before and after the game sound as if he's trying to help KU get recruits. The fieldhouse is louder than Rupp; he praised the town, the fieldhouse, the campus. He was a walking advertisement for KU and he's done that before. Whatever people wanna do is fine, but I've never understood the venom toward Calipari from some, except the fact the schools compete for recruits and titles.

Gary, some of the dislike directed at Calipari is likely due to his alledged involvement in scandals at UMass and Memphis, some for his "in your face" personality, and some just because he is a highly compensated coach at a rival "Blue Blood" school. Some folks believe his hands are dirty when it comes to recruiting... e.g. Marcus Camby & Derrick Rose.

I'm not a fan, but I have not seen proof of any personal involvement in corruption by Coach Calipari, and will continue to respect him for his work and his ties to Kansas basketball.

Thanks Gary and Kit for your comments. There are certainly come reasons why Coach Cal is controversial, but I do have a lot of respect for him. It's somewhat like Larry Brown, who is a masterful coach, but sometimes a little lacking on the ethical front. Of course, even Roy Williams, for whom I have great respect as a person, is being dogged a little about goings on in Chapel Hill with the academic fraud allegations.

I guess the bottom line is that KU under Bill Self seems spotless in my opinion. He and his staff put great teams on the floor, plus they get the academic results. In short, Bill Self is just a remarkable human being, both on and off the court.

I would love to know what Cal and Self were talking and laughing about before the game! Loved seeing the camaraderie and the competition. UK came to play and kept Perry pretty quiet. Thank goodness Korea Wayne showed up! Kinda sort of lookin forward to goin to Rupp for the return and kinda sort of not. Though it would be great to go in Rupp and get a W.

Still shaking my head about Perry's second foul. Perry was called for a moving screen, though Ulis turned and ran into Ellis instead of staying with Selden, who Perry had just handed off to. If anything, it should have been a foul on Tyler Ulis for being dumb enough to run straight into a guy a foot taller. : )