Wayne Selden Jr. takes his game to another level vs. Kentucky 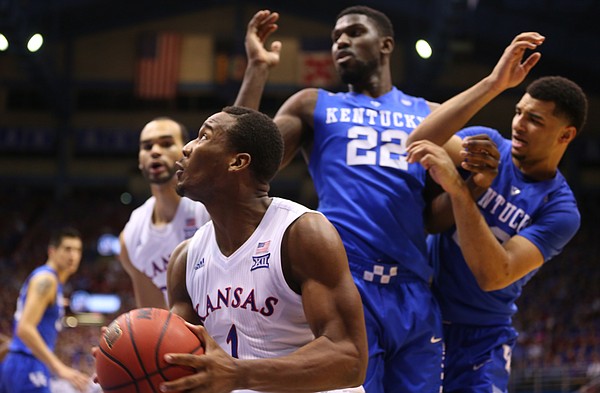 Kansas guard Wayne Selden Jr. (1) cuts to the bucket under the Kentucky defense during the second half, Saturday, Jan. 30, 2016 at Allen Fieldhouse. by Nick Krug

1 - Wayne Selden Jr.: His one-handed slam over 6-foot-11 Skal Labissiere, who also wears No. 1 on his jersey, will be played to the delight of Allen Fieldhouse crowds for the rest of his Kansas career. Selden never has been better than he was Saturday. He repeatedly stung Kentucky with drives to the hoop and long three-pointers (3 for 5) on his way to a 33-point night. He played 44 minutes and never looked tired. Not many perimeter players in the country can match his strength.

2 - Perry Ellis: Kentucky executed a sound game plan to perfection against Ellis, limiting his scoring chances. He made 1 of 4 field goals and hit just 8 of 13 free throws. Battled his way to 10 points and nine rebounds, four off the offensive glass.

3 - Jamari Traylor: He doesn’t bring a lot of basketball skills to the equation and he is on the short side for an inside player, but he never is athletically overmatched and he doesn’t shy from contact. Lent a strong defensive effort and chipped in with five points, a block, a steal and five boards, four offensive.

6 - Brannen Greene: Was the only player to make all of his free throws (shot four of them), made 1 of 2 threes and picked up four defensive rebounds in 10 minutes. Committed two turnovers.

7 - Devonté Graham: He and Mason combined for eight turnovers in the first half, one in the remaining 25 minutes.

8 - Cheick Diallo: Made a long jumper and contributed three rebounds, two off the offensive boards, in 10 minutes.

10 - Lagerald Vick: Played two minutes, missed an ill-advised three and was whistled for a foul.

Such a strange game when compared to the Oklahoma game when a number of KU players seemed to play so well. Selden, for the most part, was the only individual who could get much going.

I'm including this game in the weighted conference rankings because of the nature of the cross-conference matchup. A barely top-20 team visiting AFH has a weighted value of 1.1.

Surprised that KU didn't set up for Ellis, perimeter shots that might have opened up his inside play.

Svi has not played a single minute since the starters met with Self. Any insight, Keegan?