Kansas guard Frank Mason, front, and his teammates look for an exit from the court as the Kansas State student section celebrate following the Jayhawks' 85-82 overtime loss to Kansas State on Monday, Feb. 10, 2014 at Bramlage Coliseum. 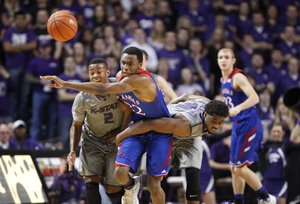 “We don’t talk about the seating arrangement or how close fans are (to the court), but the whole thing is, you don’t communicate with fans. It’s water off your back and there’s no communication between fans and players,” Self, KU’s 11th-year coach, said, explaining his long-standing policy in the wake of the Marcus Smart incident.

Smart on Sunday was suspended three games for pushing a Texas Tech fan near the end of Saturday’s loss to the Red Raiders in Lubbock.

“Certainly that was a different situation at least from my view than a lot of situations that occur,” Self added on Monday’s Big 12 coaches teleconference. “The thing that has always concerned me most is the storming of the court (after games). You could have a bumping or something like that, that could escalate into something else. I’ve never addressed my team obviously about what happened Saturday in that respect in which it happened (in OSU-Texas Tech game), just in general: Don’t communicate in any way shape or form with anybody that was there just to watch a game.”

Self on Missouri football player Michael Sam informing the public Sunday that Sam is gay: “The thing I would say more than anything is there’s a reason why Missouri had such a great season in football. Obviously they have good players. I’m not on the inside and know what goes on ... (but) when you have the confidentiality of your entire team in a way in which they did, that means you know they’ve got each others’ back,” Self said.

The Tiger players did not leak the information to the media during the season, but instead let Sam speak publicly on his own terms.

“That’s one thing to me that stood out. Secondly without knowing anything about the situation, it takes a lot of courage and guts for someone to stand up for their own convictions and how they feel and I certainly applaud what was done yesterday. I don’t think anybody should ever have to live or hide behind who they are or how they feel so I certainly applaud that,” Self said.

Jeannie to be in Lawrence: KU officials on Monday said actress Barbara Eden will attend Saturday’s KU-TCU game in Allen Fieldhouse. Her husband is a KU graduate. Eden, 82, is best known for the starring role of “Jeannie” in the series “I Dream of Jeannie.”

It means a lot to alums: Former KU player Tommie Smith, who lives in Topeka after growing up in Kewanee, Ill., watches closely when the Jayhawks play the Wildcats.

“I was actually contacted by K-State before I was by KU. I still have a little Wildcat thing I throw around the house,” said Smith, a member of KU’s 1974 Final Four team. “We always want to be the state champs. A couple years ago, K-State put out a T-shirt about being Texas state champs. That didn’t go over well. We go to Manhattan ... it’s our intent to win because we own the building (Bramlage). We go there and do what we have to do. We have a lot of confidence in that building.”

Spradling likely will play overseas: Kansas State senior Will Spradling told the Journal-World at Big 12 Media Day that he plans on a career in pro basketball.

“My goal is to play overseas and play as long as I can and hopefully come back and coach,” said the K-State point guard/business administration major (with a management option) out of Shawnee Mission South.

“Obviously coach Weber (Bruce, KSU) has helped me with that a lot and I’ve talked to him about it a lot. I try to keep good care of my body, get in the ice tub, do what I can. Hopefully I’ll be able to play a while.”

Respect: Players from Kansas and Kansas State may be rivals, but they are not enemies. Typically, the players serve as counselors at some of the same camps during the spring and summer months.

“I’ve worked with a lot of them: Perry (Ellis), Naadir (Tharpe), Frank Mason, Brannen Greene, Tarik Black ... there are a lot of them I worked with,” said Spradling. “It’s always fun to work with them. We don’t really bother each other.

“We get along just fine. Obviously when we get on the court and put jerseys on, it’s a different story. Off the court we get along. We interact a lot,” Spradling added.

Spradling took a 1-7 record vs. KU into Monday’s game.

“It’s a great rivalry ... the fans, the students, everybody gets pumped up for it,” Spradling said of KU-KSU. “Obviously the environment makes it fun (but) I’m pumped up for every game.”

“In games like K-State or whatever, it’s nice to have some local kids that grow up understanding the rivalry and that kind of stuff,” Self said.

“I’m a big believer that, hey, the best players don’t always make the best teams. The best players that play together the best make the best teams. We’ve had some great blend guys that came from the state of Kansas, great blend, whether it be Travis (Releford) or Tyrel (Reed) or Brady (Morningstar), that the ball moved a little better when they were in there, or they were able to make sure that they piggy-backed screens or went ball-side of every curl. Maybe those don’t translate to be big things, but those are plays that win basketball games.

“I’ve been real pleased with who we’ve been able to recruit. I hope there are good players in our state every year. I wish we could get a kid out of here every year because I do think it adds something to your program to have some local flavor.”

“I never talked to the coach who is there now, (Bruce) Weber. I talked to Frank a lot,” he said of current South Carolina coach Frank Martin. “They have a good program, good people also, but I just ended up deciding to go to KU.”

“Gip’s a big part of our team,” said frosh guard Marcus Foster. “He’s a leader for us. He shows us the right way to go. I told him, ‘You’re going to have a good game Monday’ because he deserves it. He works hard every day in practice and pushes us.”

KU vs Mizzou: bloodbath rivalry; KU vs KSU: healthy rivalry. I have respects for KSU players. I'm ok with their fans storming the court, that just showed how much KU was respected. Mizzou fans would've burned a car to celebrate (j/k).

How about the f--- KU chant? Is that healthy?

No more or less healthy than the Muck Fizzou T-Shirts and "Rip his #$2$#ing head off" chants. Motes, eyes, beams and all that.

Well said. I disagree with the "so what they did it post."

Also, since we're talking about behavior, are they still doing the home of the Chiefs thing? If so, it could be stopped in one instant. Self could announce before the game that if students yelled this, the team would not compete for the tip and would allow the opposition a free layup. That would stop it immediately.

Who cares about the stupid chant? We're talking about the players here, Mizzou players would've done some flagrant fouls on the court willingly.

It makes me sick to my stomach to think of Ellis going to KSU.

Perry would have never chosen KSuck, he has a brain and it is the worst academic school in the big 12!

Hating on the rival is all good and well... But that is far from the truth, unfortunately. Don't try and diminish what is a fairly impressive academic institution because you dislike the sports teams and think the rest are farmers... http://www.k-state.edu/media/achievements/scholarstop10of5pub.pdf

The Marshall Scholarship is the most prestigous...www.marshallscholarship.org

Okay, chalk one up for the Wildcats. They played with more hustle and fire than the 'Hawks, got some home calls from the refs (esp. Black being mugged in the first half!) and eked out a win.
I'm sure they will have t-shirts on sale today with the date/score, etc. and are booking their tickets to the Final Four, since that seems to be what they think will happen after beating KU. As someone posted last night in the twit feed postgame: "And tonight's loss drops the Jayhawks to first place."

Here's hoping that Jojo and Tarick are okay soon. What happened to Jamari? They never said on the part of the game that I saw...

Jamari was suspended for the game. We really could have used his athleticism. I hope he realizes we may have won with him and learns from his mistake. I am disappointed in a guy who's a third year in the program and gets sat out a game for his behavior, whatever it was.