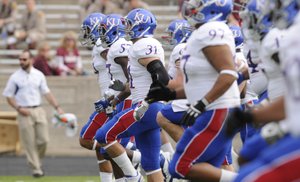 What Sherman actually said was, "It doesn't take much to be perfect against KU."

It sounds like that the coaching staff was very predictable and the team had an easy game plan to execute. Clearly it is against Gill's coaching style to actually make an in-game adjustment, so once it was determined that they had the game plan down, A&M could do whatever they wanted.

Basically, the coaching staff has made the 4 plays that we run very predictable and the defensive schemes can be summed up very simply.

And I always am impressed with how the two hand touch in practice is paying off with huge dividends.

this seems to be a consistent story from other coaches...#FireTurnerGill