Kansas forward Kevin Young comes away with a steal from Towson forward Enrique Gumbs during the first half on Friday, Nov. 11, 2011 at Allen Fieldhouse. 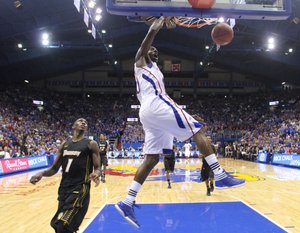 Tentative, self-conscious, wondering how to fit in instead of just being himself and doing what he did that earned him a scholarship at a perennial powerhouse.

When the curtain came up on the season Friday night in Allen Fieldhouse, Young’s uncertainty vanished. He looked like he belonged.

Thomas Robinson picked up two quick fouls, creating an opportunity for Young, who cashed in on it with 13 points, seven rebounds, two assists, two steals and two blocked shots in 14 minutes. Oh, and three dunks.

“I like to dunk,” Young said, then corrected himself. “I love to dunk. It’s my favorite part of the game. It gets everybody into it, the crowd, all the players on the team, and it rattles the opposite team as well.”

His second dunk, coming after he stole the ball and went the distance for a furious flush, triggered a huge roar and was one of the most impressive among KU’s 12 dunks in a 100-54 rout of Towson.

“Maybe the light came on,” KU coach Bill Self said of the junior from Perris, Calif. “He was aggressive. He got his hands on balls. Thomas (Robinson) got 11 rebounds, but Kevin was our best rebounder. I thought in 14 minutes, he maximized his time out there, without question.”

At 6-foot-8, 190 pounds, Young will have trouble establishing position against the wide-bodies. Not much he can do to change his frame significantly at this point, but he can help a thinner-than-usual bench overachieve the way it did Friday.

Asked to define his role, Young said, “Rebound, extra-possession guy, just do as much as I can to contribute to the team when I’m out there. Go hard and give energy.”

Young has plenty of it stored up after spending a year away from competitive basketball. He attended San Bernardino Valley College, helped to coach at Barstow CC and committed to transfer to San Diego State but changed his mind.

He faces much stiffer competition daily in practice than he confronted Friday.

After his big night, Young talked about where the team needs to improve, another sign he’s blending into the culture.

“Our rebounds,” he said. “The big guys — like Thomas said — we kind of slacked off and didn’t box out as much as we should have. We should have got a lot more rebounds than we did. We need to box out more, go look to hit a guy before we just turn and run to the rim.”

Critiquing himself, he said, “Defense. I need to still be a lot more aggressive on defense. Stop making careless mistakes like reaching for the ball and playing out of position.”

Young doesn’t claim to have it all figured out.

“I’m still not sure how to react after a dunk because when I was at Loyola, I had an Afro, and I would pat my Afro after a dunk,” he said.

Here’s an idea: Do what your position coach, Danny Manning, did. Beat your man down the court and prevent the guards from feeding him the ball.

Yes. It's never a bad decision to do like Danny did.

Nice story. Nice stats, performance and self analysis by Young.

In reviewing the game stats the thing that stands out the most, to me, is that KU was out rebounded by what most would consider an inferior team. And yet, looking at just TRob's and Young's rebound totals and nobody else's, and then seeing the final score, you would assume we did real well on the boards.

Except for a few lapses on defense at the end of the first half, I'd guess we are ahead of where most of us fans might have imagined us being at this point in the season. Of special note are the early performances of Tharpe and Young.

Having lost so much offense from last year's team, that has been one of the biggest surprises with this team's performances. Even though the caliber of competition hasn't been that great, yet, credit still must be given to what they have achieved pointswise. That said, KU's defense is going to be the telling point over the eight day stretch of November 15th to November 23rd, and may well define where we will be at the end of the regular season.

The glass is definitely more than half full. Bring on Kenstinky.

If Young had an automatic 12' shot, he'd be a pretty tough player to guard. As it is, he can rebound incredibly well and, obviously, dunk the **** out of the ball. I look at his game as a work in progress, but there's tons of potential there.

New acronym to add to RCJH and FOE.

WWDD? What Would Danny Do?

Why would she say that? Funny saying these days but people use it incorrectly so often.

TRob is going to cause a lot of frustration if he is unable to stay out of foul trouble. Amazing player but he needs to mature in this area.

Fouls by the bigs will be an ongoing concern. Withey had 4 in 18 minutes. I figure Young will get a lot of minutes and hope someone else can contribute off the bench down low. Looks like we are solid on the perimenter with plenty of help off the bench.

Sounds like KY learned a lot about the game from his year on the coaching side. Tthat ought to really benefit him as the season progresses.

Tom, the last line of the article was perfect. Dunk that ball as hard as you can, then run back like the house is coming down around you (which it just might be!)

Sorry for that extra "t". Guess I should've kept my cool and not stared down my phone screen! :P

The coaching angle was one that I wondered about as well. How much has his game changed having spent a year teaching other (less gifted?) kids learn what the coach wants?

Why aren't there any KU highlights on ESPN?

They did. I caught them twice.

So did I, and both times they said Robinson had missed the first two games because of being suspended.

Please. It's "role". Unless you're refering to him being a bagel or hamburger bun...

I played a large croissiant this morning.

The title of this article should have been...

Tom, you missed a good chance.

I would've taken back every bad thing I've said about Keegan if he had used that title.

"We need to box out more, go look to hit a guy before we just turn and run to the rim.”

For years I've wondered, "What is so hard about this?" We learned how to do it in high school. When the ball went up, we had it drilled into us to turn and find your man and box him out. Why can't KU players learn this instead of just following the ball with their eyes as if mesmerized by its flight?

I don't recall this being a problem in prior years but it surely was last night. Withey had some nice O-rebounds but only 1 on D. He really needs to improve in that area. Being in foul trouble does limit physical play so that is also part of the problem. Except for T-Rob we are a little short on physical presence down low.

With the loss of so much offense it is great to see this team so focused on defense. Hitting the boards, making steals can create many offensive opportunities. Nice start, but now we get Kentucky so it is great to see an early test so we can grow and learn early. It will be an exciting year.

“Maybe the light came on,” -- KU coach Bill Self

Kevin Young, welcome to the Bill Self school of praise lite and emotional toughening.

When Self starts out pushing buttons on a guy, it means he plans to depend on the guy down the stretch. Just ask TT & EJ. :-)

Trend line up, up baby.

Lost by only one point on a ref's call.

He's already making you look like one of these weasels in The Oxbow incident. :-)

And of course they blew the lead. He's rebuilding the offense the first two seasons. Its a given that they'll blow leads.

Didn't anyone teach you anything about football ever?

I quit watching the game 10 years ago, when it became clear that head impacts lead to diminished capacity later in life. I've forgotten more football the last ten years that you will ever know.

Get ready for a .500 season next year (the third season).

And then a run for Number 1 if they get lucky and fin a top QB some where along the line. (the fifth season).

How does it feel to be wrong about TG so soon? :-)

"I quit watching the game 10 years ago, when it became clear that head impacts lead to diminished capacity later in life. I've forgotten more football the last ten years that you will ever know."

Oy! If this is you on diminished capacity, what were you like BEFORE? =)

This year's team needs a surprise, something unexpected, some good luck for a change .. might Young be that?

i think it's very possible.
let's put it this way: i get the feeling that coach manning will be scheduling more 1-on-1 time with young than he anticipated before last night. if you look at the tall trees on the roster right now, young is the player who will have the most potential gametime impact from side sessions with coach manning. as a conservation of limited resources argument, young is the obvious choice for manning to direct his valuable time because young has the higher growth potential as opposed to guys who have been taught by coach manning for years and have already learned 80% of what young has yet to be taught. if we take young's performance last night as a baseline, that's unexpected and impressive enough. add a 300-level independent study course on coach manning's advanced inside basketball for 8 weeks and watch out. if young can learn and apply what he's been taught, the word 'surprise' will be an understatement.

Remember, Coach Manning has enough time to work with all the bigs. :-)

I missed the game. How was Young's D?

With Taylor, TRob, Relford, and Withey on the bench (a nightmarish concept at Halloween), Wesley, Teahan, Young, and Tharpe flat got it done on both ends of the court with defensive tenacity and deliberate offensive control and patience. The pride in the coaching staff and these kids' performance actually had me fight off a tear. RCJH I love this game!