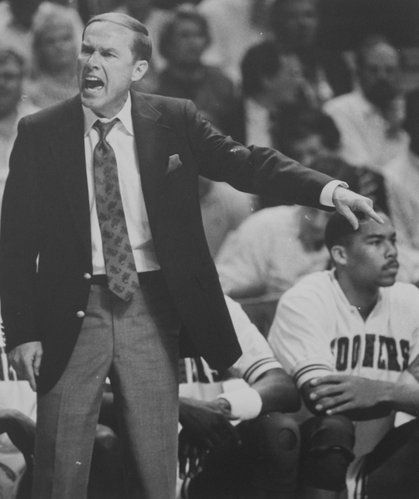 Richard Gwin/Journal-World Photo. Oklahoma coach Billy Tubbs screams up a storm during his team's 83-79 loss in the 1988 NCAA Championship game on April 4 in Kansas City, Mo. by Mike Yoder

Former Oklahoma basketball coach Billy Tubbs, one of the most popular villains of the 1980s in the world of Kansas basketball, died Sunday at age 85.

Tubbs, whose fast-paced, in-your-face brand of basketball made opponents squirm and OU fans squeal with delight during his time with the Sooners from 1980-94, was as popular for his crazy antics on the sideline and in celebrations as he was for his coaching ability.

“He was one of those guys that you loved or you loved to dislike,” current Kansas basketball coach Bill Self recently said when asked about Tubbs' legacy. “And I know Kansas fans had their moments where they certainly disliked (him).”

Tubbs’ teams won four Big Eight titles in a six-year span, earned a No. 1 seed in the NCAA Tournament in three consecutive seasons and, of course, reached the 1988 national championship game, where they lost to Danny Manning and the Jayhawks, 83-79, after a wild first half that saw the two Big Eight rivals tied at 50 at the 50th anniversary of the Final Four.

Self, who actually played against Tubbs' teams during his days at Oklahoma State, recently reflected on a laundry list of highlights from the Tubbs file.

Self mentioned the time when Tubbs had his team cut down the nets at Allen Fieldhouse after winning a Big Eight title, the time when there was some confusion about which finger his Sooners players were using while wearing foam fingers at Colorado and an incident when he was at TCU, after OU, when he had his team to run through a line of sparklers during pregame introductions at UNLV to match the Runnin' Rebels' fireworks show.

“He did stuff like that all the time,” Self said with a grin. “I could go on and on about so many things he did that created controversy and interest at the same time.”

The one that Self seemed to enjoy reflecting on the most came during an OU-Missouri game, when Tubbs was asked by officials to address the home crowd and ask them to stop throwing things on the court.

He did. With his own flare, of course.

“The referees request that regardless of how terrible the officiating is do not throw stuff on the floor,” Tubbs said on the microphone at mid-court.

The request drew a roar from the home crowd and a technical foul, as well.

For Self, who grew up in Oklahoma, Tubbs' influence on basketball in the state is not something he'll soon forget.

“That's a man that created a lot of memories for a lot of people,” Self said of the coach who won 641 games in 31 seasons at four different programs. “From a popularity standpoint, (it was) Wayman Tisdale, Nolan Richardson and, obviously, Billy Tubbs. They did more for basketball in our state in the modern generation than anybody has.”

We are heartbroken to hear that legendary coach Billy Tubbs passed away this morning at the age of 85.

His family has requested that we share the following statement. pic.twitter.com/GOBLiubBQ3