KU head coach Les Miles said following the Jayhawks’ 52-22 loss to Iowa State on Saturday that Prox informed the coaches earlier this week he is opting out of the remainder of the 2020 season.

“He has a very significant personal reason,” Miles said of Prox’s decision, which came less than two weeks after KU lost offensive star Pooka Williams to an opt out. “That’s certainly not something I will share. But he has reason to opt out, other than football,” Miles added of Prox.

An inside linebacker who made nine tackles in his most recent appearance for KU, at West Virginia two weeks ago, Prox entered the weekend as the Jayhawks’ third-leading tackler (23 total) even though he had missed two games already this season.

“It was a pretty good blow,” sophomore safety Kenny Logan Jr. said of losing Prox. “But we have guys behind him that were ready to step in and take the role on. So I’m happy those guys are here.”

Miles said he doesn’t know whether Prox, who is a junior, will be back for the 2021 season. 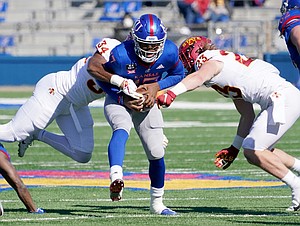 Pair of O-line starters out

Two starting offensive linemen, center Api Mane and right tackle Adagio Lopeti, were out of the lineup versus ISU.

With Lopeti also an option as a backup center for Mane, the Jayhawks went with Chris Hughes, typically the starting right guard, at center.

Freshman Armaj Adams-Reed, in his second career game, made his first start at KU, filling in for Hughes at right guard.

True freshman Garrett Jones also handled snaps at center, coming on for the first time in the second quarter.

When Adams-Reed and left guard Jacobi Lott had to leave the field at various times during the loss, walk-on redshirt freshman Jack Werner stepped in.

The Jayhawks once again were without first-string punter Kyle Thompson. The senior missed his second game in a row, with the first being a disastrous day for KU’s punt team at Kansas State a week ago.

Thompson’s backup, Donovan Gagen, didn’t punt against ISU either, a week after getting injured on punt coverage at K-State. But Gagen was able to hold for KU field goals and extra points.

Freshman punter Reis Vernon handled the punting duties most of the game, averaging 43 yards on his six punts.

Liam Jones also punted once, with a mishandling of the snap forcing him to rush a punt that went 35 yards and out of bounds.

The Cyclones only returned two punts, and gained 29 yards on those two chances. 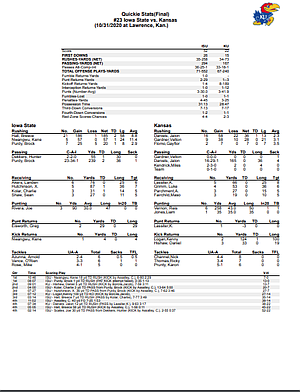 Even more Jayhawks out

Saturday’s matchup marked the 100th meeting all-time between the Jayhawks and Cyclones on the gridiron.

And the hits just keep on coming ...

Given how shorthanded KU was, I thought there were some good signs in this game. But in the end, it's still another blowout loss.

Some day we'll look back at this time and remember that it was just the beginning of the road back to respectability. I just hope that time will be some time this decade ...

Thought Iowa State should have put the ball on the ground on their last possession and run out the clock. Less than three minutes and you’re up by 23 and you’re on your own 45 and you put it in the air. Come on.

So IF he returns next season, is he a junior or senior?

I don't think this year counts towards eligibility. I think it's just a free year for everyone the way I understood it.