'Hawks in the NBA: Kelly Oubre Jr. becomes a key piece in Phoenix 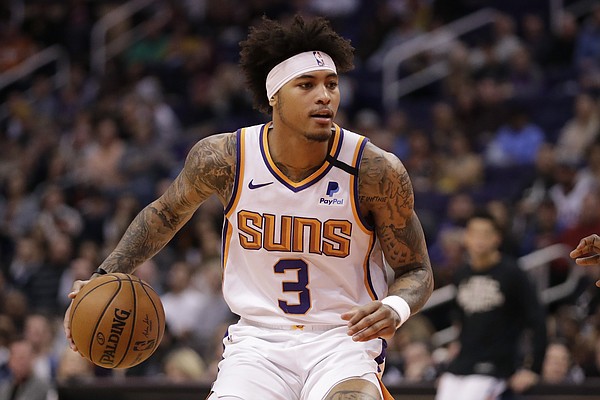 Phoenix Suns forward Kelly Oubre Jr. (3) against the Golden State Warriors during the second half of an NBA basketball game, Wednesday, Feb. 12, 2020, in Phoenix. (AP Photo/Matt York) by Matt Tait

League officials recently announced the approval of the NBA’s plan to restart play in early July, leaving 22 teams still alive in the 2020 title chase. While we wait for July to arrive, it seemed like a good idea to spend some of this idle time looking back at the season that was for the former Kansas Jayhawks in the NBA.

He played just one season at Kansas and spent half of the 2014-15 season trying to figure it all out. But by the time his KU career ended, Oubre had shown flashes of his potential to be a bona fide star.

His NBA career has followed a similar path.

Quiet out of the gate after being the 15th overall pick in the 2015 NBA Draft, Oubre made more starts (55) during the 2019-20 season with Phoenix than he did in his first four seasons in the league combined (44).

He also has delivered career scoring numbers, averaging 18.7 points per game in 56 games with the Suns this season.

Oubre made a name for himself in Washington, playing a valuable role on a couple of playoff teams with the Wizards. But the move to Phoenix has opened the door for him to become one of the key pieces of a franchise.

This season, Oubre’s shooting numbers are up almost across the board and he has hit a career-best 35.2% of his 3-point attempts and also registered the best effective field goal percentage of his career at 51.7%.

Overall, Oubre’s game has started to take on a more well-rounded look, as he has put an even greater emphasis on defense, rebounding and even assists during his time in Phoenix.

That production came at the right time, too, as the Suns signed Oubre to a 2-year $30 million deal last July.

Oubre ranks as the Suns’ third leading scorer at 18.7 points per game (behind Devin Booker at 26.1 ppg and DeAndre Ayton at 19.0), second leading rebounder at 6.4 boards per game and third on the team in steals per game.

For his career, Oubre now holds averages of 10.9 points and 4.1 rebounds per game. But the former Jayhawk, who is still just 24 years old, is trending in the direction of doubling those numbers before too long.

Oubre may still have time to add to his stellar 2019-20 numbers, too. According to the NBA’s latest proposal to resume play in Orlando, the Suns are one of 22 teams who would still be alive in the chase for a championship.

Although he was dealing with a knee injury heading into the shutdown — the former Jayhawk had surgery to repair a torn right meniscus on March 3 — Suns owner Robert Sarver recently said that Oubre should be good to go when the season resumes.

What’s more, Oubre posted a workout video to his Instagram account during quarantine that showed him moving with ease, dunking and attacking off the dribble, all without a brace.

According to NBA insider Shams Charania, Oubre is now out for the rest of the season because of the knee injury. Charania reports that, instead of playing, Oubre will continue to work on his rehab in hopes of a full return for the 2020-21 season. Oubre is expected to travel to Orlando with the Suns for the resumption of the 2019-20 season.

More 'Hawks in the NBA Updates:

Holy Toledo! Kelly signed a 2 year, 30 million contract with the Suns? Running the math, that is $15 million dollars per year! Or 10 times more than Svi's Salary.

KU Fans always lament "Kelly, we hardly knew you". His only season ended with that bummer loss to Wichita State. And don't forget Cliff was forced to sit the bench. Where is Cliff now? Playing in France.