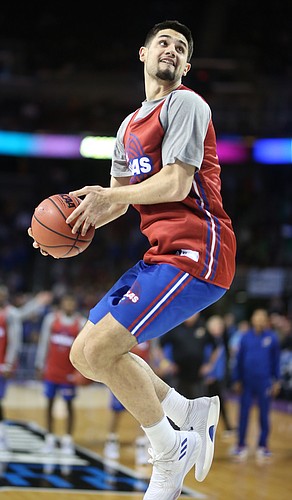 Kansas guard Sam Cunliffe (3) spins into a jam during practice on Wednesday, March 14, 2018 at Intrust Bank Arena in Wichita, Kan. by Nick Krug

One of the big factors in former KU guard Sam Cunliffe's decision to leave Kansas was the desire to get closer to home.

Eight days after announcing his departure from Lawrence, Cunliffe is closing in on making that happen.

According to a source familiar with Cunliffe’s plans, the 6-foot-6, 200-pound guard from Seattle, who made a stop at Arizona State before coming to Kansas, is eyeing a return to the Pac-12 for the final three years of his college career.

The source said Cunliffe has identified the University of Washington as his top choice and added that he is in the process of trying to make the move happen.

Cunliffe, who will sit out the 2018-19 season and have two years of eligibility remaining beginning in 2019-20, also has considered Pepperdine and a couple of other programs in the Northwest.

The Huskies had just two seniors on the 2017-18 team that beat KU at Sprint Center last December, but saw those two and four other players leave the program since the end of the 2017-18 season. Three of the four nonseniors left to transfer and four of the six departures were guards.

Washington coach Mike Hopkins was prepared for the departures, lining up a five-man haul in the Class of 2018 that ranked No. 32 in the nation according to Rivals.com to fill the spots. But only one of UW’s five incoming freshmen is a guard and none of the newcomers play Cunliffe’s position.

Therefore, adding Cunliffe, in terms of position and the open scholarship, would make sense, provided the Huskies coaching staff believes he would fit with their program.

According to the Rivals.com database, Washington was one of eight programs to offer Cunliffe a scholarship out of high school, back when he was a four-star prospect in the Class of 2016, ranked No. 36 nationally.

That offer came with former UW coach Lorenzo Romar (now at Pepperdine) leading the Huskies. Romar assistant coach Will Conroy stayed on with Hopkins and remains on the current UW coaching staff.

I was the lunatic that said Wichita State would be a good landing spot for him even after learning he wanted to head back closer to home. Needless to say I was wrong and everyone else was right. But think about if I was right though...

Good for Sam. He has a lot to offer virtually any program and seems like a great teammate as well.