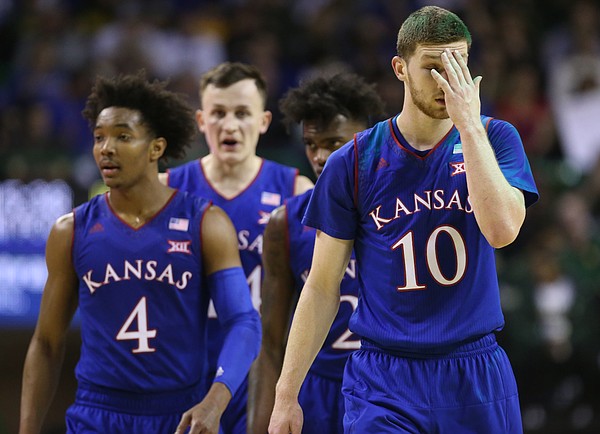 Kansas guard Sviatoslav Mykhailiuk (10) and the Jayhawks come back into the game after a timeout late in the second half, Saturday, Feb. 11, 2018 at Ferrell Center in Waco, Texas. by Nick Krug

Quick grades for five aspects of KU’s 80-64 loss at Baylor on Saturday in Waco, Texas.

Devonte' Graham did everything he could to get this team's offense going, both by scoring buckets and pushing the pace to try to get easy looks for his teammates and KU's transition game going, but he was just one man. The rest of the offense was woeful at best, misfiring too many times, turning the ball over and making bad decisions from start to finish.

The few minutes of zone that the Jayhawks played well in the second half helped Kansas crawl back into the game, but they still gave up 50 points in the second half and allowed Baylor to shoot 56.6 percent for the game, including 53.3 percent from 3-point range. Not the kind of defense Bill Self is used to seeing nor demands from his teams.

Once again, Udoka Azubuike was careless with his fouls and too often made bad decisions with the ball when he actually did get it. His 4-of-4 shooting performance might look decent and seem deserving of something better than an F, but, in reality, it just makes his overall offensive night look worse because he should have been doing much more of that instead of allowing Baylor to gain confidence guarding him by being passive in the post. Add to that an uncharacteristic, low-energy start by Mitch Lightfoot and this grade is easy.

Given what Graham did, it's hard to go too low here. And there were some — some — decent moments from a couple of KU's guards. But overall, the backcourt looked lost and played fragmented basketball for far too much of KU's ugliest loss of the season.

It's kind of odd to call it a bench, given the fact that two of the three guys who played off the bench played 32 minutes apiece, but that speaks both to this team's chemistry issues and lack of depth. The fact that two players who have primarily functioned as starters this season could not bring much energy or production off the bench was bad for the Jayhawks and this grade.

Pretty much nails it. As bad a team as Self has ever had. They all want to do well but the talent is not there.

Interesting comment Steve because that is the complete opposite of everything thing written about this team and game. There’s loads of talent on this team but they certainly didn’t bring the energy (want to) in this game.

Each player has some talent but few have talent in many areas. What is happening is the chemistry is bad so they don't play as a team. The offensive talent (3's) has been what has driven them to victory. That is gone for some reason and exposes the rest of the talent or lack of. Without Svi and one more player besides Graham hitting the shots, this season will end bad

Frankly This Frankenstein of a team, with its incongruous parts, is very painful to watch. They have enough talent not playing as a team, to come close, but they cannot get over the hill without playing tough defense, and literally attacking the boards. Strange thing is that at moments, SVI, Newman and Vick all look like they can rebound, but they never seem to do it at the same time. This team has 4 good, not great, but good shooters, 3 pt shooters, and one big unidimensional monster in the center. This team has such a low threshold for success, that it is really amazing we are even in second place. Frankly Tech looks much better when you watch them, and it pains me to say that, but it is true. Still Tech has KU, OU, and WV still to play, so we are not out of it yet.

Let's be frank, we really need to win at Ames, and that will not be easy.