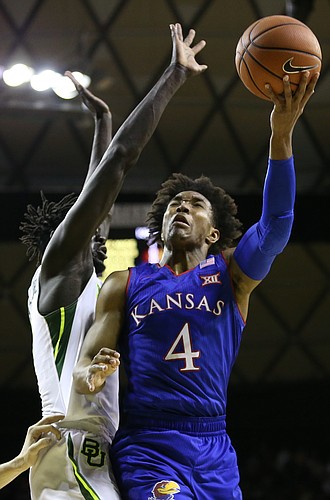 Kansas guard Devonte' Graham (4) is fouled by Baylor Bears forward Jo Lual-Acuil Jr. (0) on his way to the bucket during the first half, Saturday, Feb. 11, 2018 at Ferrell Center in Waco, Texas. by Nick Krug

1 - Devonte’ Graham: Played the usual 40 minutes and was the reason Kansas didn’t get blown right out of the gym. Led Kansas with 23 points, made 8 of 17 field goals, 4 of 10 3-pointers, and all three free throws. Had four assists and three turnovers. Easily KU's most consistent performer.

2 - Malik Newman: Scored 11 of his 14 points in the second half. Shared team rebounding lead with three teammates with four. Benched in favor of Marcus Garrett, a decision coach Bill Self said was based on practice attitude, Newman made 5 of 16 shots and 2 of 10 3-pointers.

3: Lagerald Vick: Played 32 minutes off the bench, including all 20 in the second half, which went much better for him than the first half. At one point, Vick scored six consecutive points. Unfortunately for him and the Jayhawks, two of those were for Baylor. He went up for a defensive rebound and accidentally knocked the ball in the basket. All nine of his points and all four of his rebounds came in the second half. Played 12 first-half minutes and all he had to show for it was a pair of missed shots, two personal fouls, an assist and two turnovers.

4: Udoka Azubuike: Had a couple of careless fouls, which limited his minutes to 19 on a day he was the only suited to matching up with Baylor’s size. He didn’t defend well when in the game and had trouble holding onto the ball. Made all four field-goal attempts and turned it over three times. Totaled eight points and four rebounds with one blocked shot.

5 - Marcus Garrett: He started, but Kansas needed more offensive punch in the second half, so he didn’t start the second half and didn’t get in until the final three minutes. Totaled six points, three rebounds and two steals in 20 minutes. Teams don’t guard him on the perimeter.

6: Mitch Lightfoot: Fouled out in 22 minutes after producing two points, three rebounds (all offensive), two assists and two blocked shots. Made just 1 of 6 shots and struggled against Baylor’s size.

7: Svi Mykhailiuk: Garrett’s hand swung back on a missed dunk in warmups and accidentally smacked Svi in the face, his right eye catching the brunt of it. At one point in the layup line, Svi’s eye was partially swollen shut. Ice treatments opened it back up. He said his vision was fine, but it appeared hindered based on how he shot. Made 1 of 8 shots and missed all six 3-pointers. Totaled two points, four rebounds, two assists and one turnover. Has made 2 of 13 3-pointers in past three games.

8: Silvio De Sousa: He checked into the game, King McLure shot a lane jumper over him for an easy bucket, then De Sousa went to the other end, tried to make a move in the post and was whistled for a charge. He checked back out of the game, never to return. He played 28 seconds.