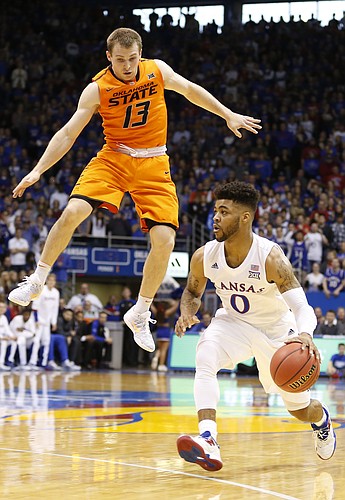 Quick grades for five aspects of KU’s 87-80 victory over Oklahoma State on Saturday at Allen Fieldhouse.

Too many missed free throws and a really rough start to the game, both from the floor and behind the three-point line, pulled this usually excellent offensive team down to the B range. The Jayhawks were not their typical lights-out selves from three-point range (5-of-20) in this one from start to finish.

Oklahoma State did whatever they wanted to do in the first half and KU had a tough time stopping Mitchell Solomon of all people in the second half.

KU got next to nothing from the bigs on the offensive end, but, led by Landen Lucas, got enough on the glass to out-rebound the Cowboys 45-36 overall after being out-rebounded in the first half.

Mason and Graham were so tough and so clutch so many different times during this one. It was far from a perfect game for the KU backcourt, but they were good when they needed to be. Same goes for Josh Jackson, who delivered a double-double of 20 points and 11 rebounds.

At some point we’re going to have to start grading the KU bench on a curve, one that begins with low expectations. Another quiet day from the two Jayhawks who came in, though both Vick and Bragg did a few things to aid KU’s victory.

Round one of the battle of the Lickert video wizards goes to Mike over CJ.

Awesome photo Nick Krug of Forte levitating after being faked out by Mason.