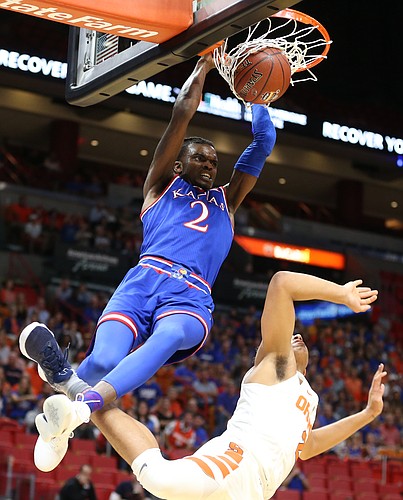 Kansas guard Lagerald Vick (2) delivers on a lob dunk over Syracuse forward Matthew Moyer (2) during the first half, Saturday, Dec. 2, 2017 at American Airlines Arena in Miami. by Nick Krug

Quick grades for five aspects of KU’s 76-60 victory over Syracuse in Miami at the Hoophall Invitational.

Enough Jayhawks had rough nights to bring this down a notch. And the team, as a whole, got off to a rough start. But the fact that Devonte' Graham tallied 35 for the second game in a row and Lagerald Vick was terrific both as a scorer and as a facilitator in the middle of the zone brought the high-scoring Jayhawks to the brink of the A range.

Syracuse made just five field goals in the first half and shot 32 percent for the game. Syracuse's 2-3 zone got all the attention, but it was the KU defense that won this game. That, and stellar senior Devonte' Graham, of course.

Silly fouls by both Udoka Azubuike and Mitch Lightfoot put the Jayhawks in a hole early and Clay Young came in to play nine strong first-half minutes to bail the team out. Even with that, neither Azubuike nor Lightfoot perfomed the way they're expected to, even though they each made a few good plays.

Devonte' Graham by himself brought this into the A range and the rest of the KU backcourt had an up-and-down kind of night.

Give Young a ton of credit for the minutes he played. And Lightfoot was good early in place of Azubuike but could not find a rhythm and stay on the floor. Marcus Garrett looked a little overwhelmed from start to finish and played the least impressive game of his young career.