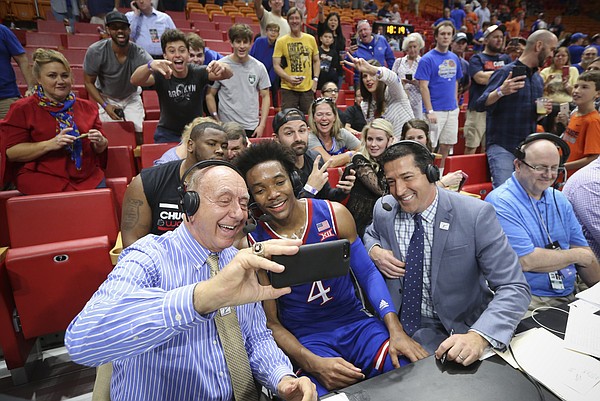 Kansas guard Devonte' Graham (4) leans in for a selfie with ESPN broadcaster Dick Vitale following his 35-point performance in the Jayhawks' 76-60 win over Syracuse, Saturday, Dec. 2, 2017 at American Airlines Arena in Miami. by Nick Krug

1 - Devonte’ Graham: Tied career-high with 35 points, made 7 of 13 3-pointers, had five assists, most on lobs, and five turnovers with two steals. Outscored Syracuse 14-4 at end of first half and stayed hot throughout second half. Averaging 35 points in past two games.

2 - Lagerald Vick: Terrific night. Did a nice job of getting the ball in the middle of the zone and reading his options. Can hit the mid-range jumper, one of the things that makes him dangerous in that spot. Also did a nice job of finding open 3-point shooters. Flirted with a triple-double with 20 points, eight rebounds and seven assists. Had two steals and three turnovers and his high-flying left-handed flush on a lob from Graham ranks high on his building career-highlight video.

3 - Svi Mykhailiuk: Bad passing led to three first-half turnovers and four for the night. Made 3 of 7 3-pointers, scored 11 points and had four rebounds and four assists.

4 - Udoka Azubuike: Looked puzzled as to where he should be at times against Syracuse’s 2-3 zone. Didn’t make himself available for post feeds, but did nice job on the boards. Had six points, nine rebounds and one blocked shot. Two first-half fouls limited him to six minutes.

5 - Malik Newman: Rough night. Vick consistently fed him for wide-open 3-pointers but Newman couldn’t drain them and finished 1 for 8 from the field and 0 for 6 from beyond the arc. Had five rebounds, five assists and three turnovers.

6 - Marcus Garrett: Scoreless in eight minutes, he had two rebounds and a turnover and was whistled for three fouls, which isn’t necessarily the same as saying he committed three fouls.

7 - Mitch Lightfoot: Threw down a lob, blocked a shot and committed four fouls in eight minutes.

Lightfoot had some key defensive charge calls. svi had two threes back to back that started the run.

Days like this the walk on deserved a point.

Yeah, I thought Lightfoot defensive position deserved a praise. That's a smart play. So did Young, as you said, Jeff. We need to use that more against teams who penetrate a lot (including West Virginia).

How does this work? Is it only the top seven, or is Clay Young really just chopped liver?

It’s scholarship players, so no walk ons. I do think Clay deserves some points for yesterday though.

No, I thought some walk-ons were on the list before.