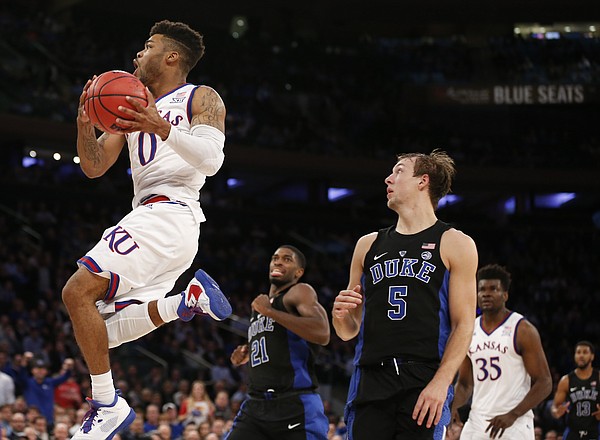 Kansas guard Frank Mason III (0) gets in for a bucket past Duke guard Luke Kennard (5) during the second half of the Champions Classic on Tuesday, Nov. 15, 2016 at Madison Square Garden in New York. by Nick Krug

Quick grades for five aspects of KU’s 77-75 victory over No. 1 Duke in the Champions Classic on Tuesday night in New York City.

Kansas shot 51 percent for the game, including 61 percent in the second half, and nearly hung 50 on the Blue Devils in the second half. This would have been an easy A — and possibly an easy win — if Kansas had hit better than 2-of-17 from three-point range and 9-of-19 from the free throw line.

The Jayhawks were good when they had to be and great at times, but still let the Blue Devils drive the ball to the rim and into the paint way too easily and also missed some opportunities to close out to three-point shooters. Beyond that, they committed several silly fouls. But they cleaned up the rebounding and forced 16 Duke turnovers.

Udoka Azubuike was a beast and gave this team 15 big minutes. Landen Lucas struggled with foul trouble yet again and only grabbed one rebound and Carlton Bragg, though clutch with a couple of buckets late, still looked passive too often and lost at times.

The three best players in the game for Kansas were the Jayhawks’ starting backcourt and one of them hit the game winner. Enough said.

As noted above, Azubuike was big off the bench for the Jayhawks on a night when they needed him, but so, too, were Lagerald Vick and Sviatoslav Mykhailiuk. The two bench guards combined for 11 points and seven rebounds in nearly 30 minutes a piece and were ultra aggressive attacking the rim as both scorers and rebounders.

Well it is always better to win than to lose. Had we lost with 3 top players in business suits cheering for Duke that would have been not so nice. But to squeek out a win with a last second shot (by the way noticed Sasha Kaun cheering for his Jayhawks) helped overcome that challenge.

Agreed on most of those grades, but the D. Opponent hits 50% FG with lots of driving by should be a D. Our rebound# is so much better, though.

Great defense played by Duke at the free throw line