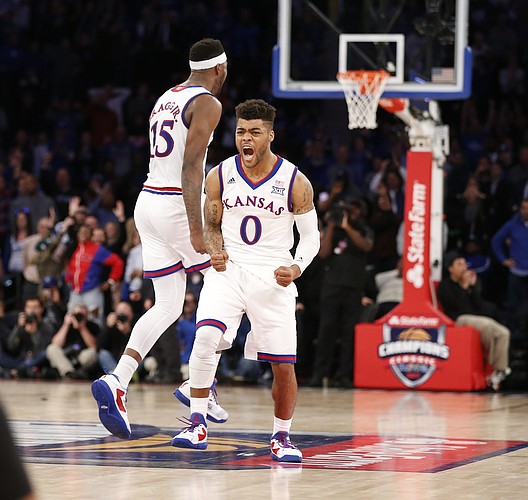 Kansas guard Frank Mason III (0) roars after hitting the final shot for a 77-75 win over Duke during the Champions Classic on Tuesday, Nov. 15, 2016 at Madison Square Garden in New York. by Nick Krug

1 - Frank Mason: All 19,812 fans and every coach and player in Madison Square Garden knew the shortest player on the court would take the final shot for Kansas. And there was nothing anybody could do to stop Mason, who scored the game-winner with three seconds left to become the dominant late-regulation player for Kansas for the second game in a row. He’s averaging 25.5 points per game. He beat Duke with 8 of 13 field goals, 5 of 7 free throws, 21 points, five assists, three rebounds and two steals. He turned it over just twice in 35 minutes. After feeding Carlton Bragg for a jumper, he scored KU’s final five points, three on a layup he finished through contact and a free throw, a play on which Duke’s post man Amile Jefferson fouled out.

2 - Josh Jackson: Was the best player in the game to start the second half, but was limited to 18 minutes on the night and fouled out. If not for a frustration technical in the first half, assessed when he slapped the ball out of a Duke player’s hands after a whistle, could have played more minutes. Made 7 of 9 field goals and didn’t turn it over. Had a steal and took it all the way for a dunk. Went 0 for 4 from the line, all in the first half.

3 - Devonte Graham: He played all but a fraction of a minute despite recurring leg cramps. Didn’t shoot well (1 of 6 from three), but took it to the rim aggressively and made 5 of 6 two-point attempts and finished with 13 points, three rebounds and two assists.

4 - Udoka Azubuike: Led the team with eight defensive rebounds and four offensive ones and did in just 15 minutes of action. All six of his points, plus a steal and a blocked shot came in the second half.

5 - Carlton Bragg: Swished a huge jumper in the final minutes from the left corner and totaled nine points and five rebounds in 16 minutes. Had a blocked shot and a steal, but also had a rough defensive night in some ways. Made 3 of 5 field goals and 3 of 4 free throws.

6 - Lagerald Vick: Played 91 minutes all last season, 31 Tuesday night. His inexperience didn’t show. Tallied nine points and five rebounds. Misfired on all four three-point shots but took it to the rim aggressively and made 4 of 5 shots inside the arc.

8 - Landen Lucas: Totaled two points and one rebound in 14 minutes and took one ill-advised jumper. Picked up his fourth foul in the fourth minute of the first half and played just one minute after that. Has not played well in either game, no doubt in part because of a sore foot.

9 - Mitch Lightfoot: Missed two shots and and had a rebound and blocked shot in three minutes. 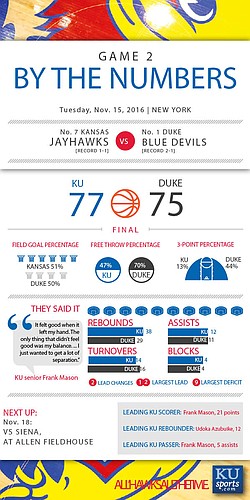 I'd say a lot more about Svi, credit him more. Can't just judge him based on his FG. He did a bit of everything. He's got 2 nice assists, grabbed a couple of rebounds (and yes, a missed bunny). Hopefully he'll get his shooting touch back in no time. We need at least one consistent 3pt shooter. That guy could be Svi.

Well hopefully it's the guy that shot 40%+ from 3 last year and made 75 of them (Graham) but yeah, Svi doing it too would be nice.

Graham did good amount of damage with dribble & drive & acrobatic scoops, eventhough his 3s not falling. But yes, Graham is another candidate to make those 3s. Vick, too, he was good in exhibition, I reckon.

Landen Lucas is not playing well at all. He doesn't seem to put a body on anyone, when the shot is in the air. Therefore, he's continually out rebounded by the opposition.

Our frosh do not seem as spaced out as previous years. Lightfoot, Udoka and Josh looked more ready than Brannen, Svi, Diallo, Bragg and Vick who played lost more often it seems.