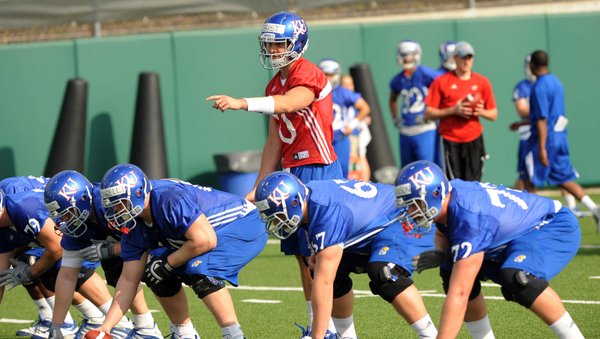 Kansas quarterback Dayne Crist (10) gets set to run a play during the first day of spring practices on Tuesday, March 27, 2012. by Richard Gwin

We now are officially two full weeks removed from the end of spring football and that seems like as good a time as any for me to release my projected KU football depth chart for the fall.

A couple of quick things to remember before diving in:

Hey Matt, so just curious did you have Marquis Jackson in the third slot or Sims? I thought Jackson was exciting at the spring game. He had guys bouncing off of him.

With as many backs as we have I don't see the relevance of a depth chart. I would really like to see Bourbon and Pierson in at the same time, using Bourbon to lead some, misdirect some. I still think our ground game is going to open up the passing game and now we have someone who can make the throws. If our D is much improved I would like to see us adopt more of the K-State model of ball control offense. With our backs four yards is not a lot of real estate to ask for. Thanks for the article Mr. Tait.

We can't adopt the K-State offense model because we can't run our quarterback two thirds of the time.

Marquis Jackson may end up being the that fullback type running back that does some lead blocking and is in the game the same time as Pierson.

If Schyler Miles beats out both Anthony McDonald and Darius Willis for MLB duties I'll be very impressed. At 220lbs and being 2/4 years of college weight lifting behind those guys, I'm guessing he will lack the thump needed for Big 12 MLB until at least next year. So I have him battling Tharp for WLB, which should be a good one, and McDonald and Willis for MLB.

To begin the season I bet Cummings is still listed as #2 QB. He has more time working with Weis, and even though Baty is studying his tail off, it might be almost mid-season before Weis is comfortable putting him in for any significant snaps. Sort of depends on Crist's health. If he goes down for the year, I could see Weis forcing Baty in there quicker.

For the sake of pass protection, and to keep him fresh for the entire season, I don't think Pierson will be a true #1 back. If Bourbon is healthy he is better equipped to keep Crist safe in the pocket. If he isn't I wouldn't doubt that Taylor Cox steps in until Sims is back in game 4. Doesn't mean Pierson won't be the star, just not the most used RB.

Of course this ALL hinges on what Weis considers #1. He could easily put a guy in at #1 for no other reason as to mess with the opposition. Wouldn't surprise me a bit. Also based on game situations #1 could end up #3 without notice, and vice versa.

Keeps us busy for summer though. Thanks Matt.

Interesting. But not as interesting as FSU to B12 speculation and rumors. Fire up the realignment blog. Why wait for actual news?

"Why wait for actual news". Love it! The news media sure doesn't wait, why should we? Bring on the percentage wheel!

Agree with oxcaljayhawk. We need more speculation about realignment and Matt's the man for the job.

Working on it.... I'll have something more later this week. I've been on the phones as much as possible, but also have have been tied up with other stuff this week. When things wind down a little more, I'll jump back on it. Hang in there!

Question for Matt (or any other "experts" around...)

What Juco players have really made an impact at Kansas & what's our percentage of success been with them? - I don't recall any major ones, but I sure hope this coaching staff has a little luck...

You got to give him a tad of credit.

There is a lot of opporetunity for some brand new faces in the kicking game. A lot has been said about the coaches unhappiness with the kickers so maybe new faces get a chance.

Very possible... I still think Doherty, with his experience and ability, has the lead.

All valid points, and I could certainly see that. I'm just going off of Coach Weis' less than enthusiastic response when asked a few weeks back about Howard as the fifth lineman.

Still, it's going to take an awful impressive camp for Sterling to land a starting gig, but I don't think it's impossible. And, based on his size alone, I would think the staff would love to give him a chance to get in the mix.

Remember that Aaron Rodgers went from being a backup at Butte Community College to starting at Cal in less than two years. I'm not saying this kid is the Aaron Rodgers of offensive linemen, but it is very possible to make the jump from Juco to college and see success early on. He's got the size and Grunhard will make sure he has the skills before he starts a game.

Unless one of the incoming RB's a stud, I think Jackson will be the starter come fall (until sims is eligible). Pierson is talented, but not an every down back.

I think it would be a tall task to ask a converted receiver to be th starting running back when running back was already the strongest position on the team. Give Jackson a year at the new position before expectations get big.

I bet it's Pierson as the starter, Bourbon and Cox as 2-3. It will be a mess when Sims comes back.

Pretty solid chart. TE is a hard call. I imagine it will be somewhat evenly divided among Mundine and Brooks.